Matthew Modine is an actor who has starred in major films including Streamers, Full Metal Jacket, Married to the Mob, Pacific Heights, Any Given Sunday, and Notting Hill. His recent[…]
Go to Profile 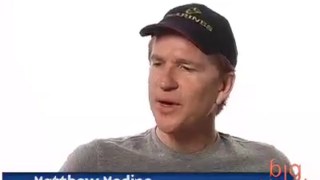 Matthew Modine explains his perceptions of the American political landscape.

Question: What separates the Republicans and the Democrats?rnrnModine: Yeah. I’d come to this kind of point in my life where I was thinking that there was no difference between the Democrat and the Republican, that we live in a capitalistic society. And the world was a global economy and America was just a piece in that puzzle. And it was very clear that Asia, India and China in particular were just now ready to crash that sort of economic power that America has been for the last century… that we’ve really become antiquated in our business practices in a way that we accomplish things. So, this Democrat, Republican thing was just, it was just a word. They were just words that had lost their relevance. And for the first time in my adult life, having visited Denver during the Democratic Convention, I felt that there is a spirit that the Democratic Party has that perhaps for the first time in my adult life that the party is unified in its ideals and its goals… That the Republican Party is a party that doesn’t represent the United States and the direction that the United States has to go. It’s an antiquated dinosaur that doesn’t represent the people. It represents the few. And the strength that they have isn’t terrifying people into thinking that the country is under attack and the Democratic Party won’t be there to defend… defend us in times of war or terrorism. That’s really what the Republican Party is selling is fear.
Up Next