Winifred Mary Beard, OBE, FBA, FSA is an English Classical scholar. She is Professor of Classics at the University of Cambridge, a fellow of Newnham College, and Royal Academy of[…]
Go to Profile
Videos

Sex in Ancient Rome: Behind the Tales of Wild Eroticism, a Different Truth

Cambridge professor and author Mary Beard explores the mythical sex stories of the Roman Empire, before she lays down the realities.
▸
5 min
—
with
Mary Beard

What is known about the free-wheeling sexual environment of the Roman Empire comes mostly from the artists and writers of the time, and while the stories are usually fantastical and hilarious (or terrifying) Mary Beard, author of SPQR: A History of Ancient Rome and professor of classics University of Cambridge, points out that it is not known how historically accurate these erotic visualizations were. They could easily have happened only in the artists’ imaginations – or perhaps they were based on a seed of truth, or perhaps they’re entirely true certain Romans really were alarmingly kinky. The writer or artist inflating a fantasy is not a far-fetched idea, it’s still done today – look at sexualized anime or manga, or the darker corners of Deviant Art. People draw out or create things from their imaginations that they wish could happen, in a small form of self-gratification. While it may have been harder to do so on the side of a clay pot with only rudimental Ancient Roman engraving technology to help, it is still doable, and artists had the time to make it all work. Such was their commitment to the cause. Bravo. So while the veracity of the more grandiose sex myths of the Roman Empire are up for debate, what we can be sure of is that men generally did enjoy a free-flowing sexual lifestyle, possessing both male and female concubines for entertainment, and sleeping with slaves or mistresses on the sides of their marriage, as they desired. Women, on the other hand, had significantly less sexual freedom than their husbands. While Ancient Rome was still more free-thinking than other cultures of its time, there were nonetheless clear boundaries for the genders. It was a married couple’s duty to have children and further the family name. As sex and cultural critic Dan Savage pointed out, men have generally always been allowed to stray from marriage, especially in Ancient Rome. Women were not allowed such freedom, and the prime reason there was ego and lineage, as the husband had to make sure whatever children he was raising were actually his children, and not the wife’s bit play thing. To combat this persistent fear about the authenticity of a son, the possibility of there ever being a play thing was simply wiped out, and the polygamist culture became a strictly one-sided practice. If anything can be said, at least today’s culture is marginally more equal in its expectation of monogamy than in Ancient Rome. Mary Beard’s book is SPQR: A History of Ancient Rome. 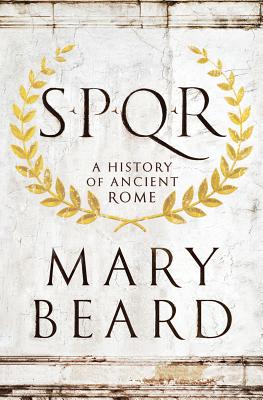 Mary Beard:  Sex is one of the things that has always absolutely enticed us about the Roman Empire. And the Roman Empire is always represented as the place where people did frightful things and where in a sense there were no sexual rules. Anything went. Everybody had a good time. And there are indeed wonderful stories about the excesses of Roman emperors and their wives. One of everybody’s favorites is the story of the Roman Emperor Tiberius who used to go off to his villa in Capri where he had a great swimming pool. And he had specially trained little boys who swam underwater while the emperor was swimming and nibbled his genitals. And he called them his little minnows. And it wasn’t just the emperors. There was a very famous Roman Empress Messalina who’s the wife of a slightly doddery old emperor Claudius. And she was supposed to have challenged the prostitutes of Rome to a competition to see how many men they could sleep with in a single night. And of course Messalina beat all the prostitutes.

Now some of this might be going on some of this but I suspect that just as those kind of exploits of Roman emperors are all fantasies, can we think of the most amazing things that people can get up to. So also they would have fantasies of Roman writers too when they kind of invented these stories about people in power. And, you know, I think there are very, very important differences between ancient sexual behavior and our own. But not quite so clearly in the level of absolute excess. And I think for a woman the biggest thing, the biggest difference you’d see is a complete double standard. That’s to say in an ordinary Roman household the woman was expected to be absolutely faithful to her husband, no sex with anyone else. The husband it was quite all right for him to sleep with the slaves, male and female, anybody he fancied. There was no such restraint on him. And of course that relates in a way back to basic anxieties and worries of a very patriarchal community such as Rome.

But the man’s anxiety was always that his wife’s child was really his. So you make sure that your wife sleeps with nobody else. But as for you it really doesn’t matter. And I think one of the bleakest places actually that you can go to in the whole of Roman world now is the one surviving purpose built brothel in Pompeii. That’s certainly a brothel, there’s absolutely no mistaking it. You walk into the front door, there’s five little cubicles, narrow, dark, just a single bed in them. Sort of wide single bed. And one lavatory out the back. And very crude but erotic paintings all over the walls. And it’s the biggest tourist attraction naturally now in Pompeii and people go in and they tend to think of their clients coming here and visiting, choosing which girl to have. And there’s lots of graffiti on the walls explaining in quite graphic detail what they got up to, what kind of good time they had. And I go in and I think gosh, you know, some people were working here. The working girls were spending their life attending to the sexual freedom, allowing the sexual freedom of the male population while they lived in what was essentially a cupboard – dark, gloomy cupboard. I think it’s quite an eye opener when it comes to ancient sexual norms which is a bit more down to earth than the sexual exploits of Roman emperors and their wives.

Has Online Dating Changed the Way We Love Each Other?