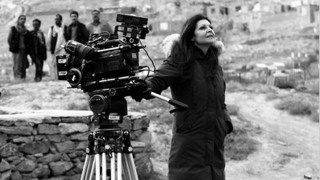 Making Films in a War Zone

Producers said it was too dangerous to make “The Black Tulip,” so the filmmaker had to take a line of credit against her house. And that was just the beginning of the difficulties she would face trying to make the first American-affiliated film in Kabul.

Question: What obstacles did you face trying to make a film in Afghanistan?

Sonia Nassery Cole:  Yeah, it’s interesting because I'm Afghan and a citizen of Afghanistan and I live in America, so I produced it and wrote it and funded, executive produced the film because I couldn’t get a dollar from America to fund this movie.  When I went to producers and studios looking for money to make this film the script got very high rating, amazing script, and I said well can you give me some money because I want to go shoot it?  They looked at me like "Are you crazy, are you out of your mind?  It’s a warzone you know.  You’re not even allowed to go there as an American and the State Department forbade me to go to Afghanistan and you’re going to shoot a movie and you’re going to take all this equipment.  You’re never going to last more than three days.  You’re going to come back, so... un-bondable, uninsurable and impossible.  Don’t even think about it."

After a really long search I couldn’t get any funding for the film, so I found out I could take a line of credit on my house and the day I found that out I said okay, took the money and got some crew together, the key crew, like cinematographers, set designers, people that you just don’t know if you’re ever going to find in Afghanistan and... went to Afghanistan.

Day one, we arrived.  My cinematographer who has worked with Oliver Stone, a very, very good cinematographer that I worked with a long time before we went to shoot the movie to prepare for this film... we arrived and that next morning... we arrived I think that evening, and the next morning there was a bombing of Indian Embassy and I remember I was drinking cup of tea.  My cup and tea just flipped over fell on the floor.  I mean it was such a massive sound and every window at the hotel that we were staying broke and I remember him knocking at the door and he said: "You know, really appreciate this inviting me here and all that we have done together, but I got to go, this is... there are bombs dropping around.”  I said what did you think?  It’s a war zone.  He says: "Well I didn’t think it would be this close. I'm not prepared for this.”  So I lost my cinematographer.

It was a very, very scary rollercoaster ride shooting this movie.  I've never experienced something so difficult in my life from day one and it went on and on and on.

Question: How did you avoid the Taliban?

Sonia Nassery Cole:  Well, you arrive in Afghanistan you just feel them.  Their energy is very vivid.  I really tried for them not to know about the film and not use the title, the actual title of the film and just tried to be secretive about it, so they... slowly, you know, they find out.  I mean I hired over 90 people and from Afghan film, Afghan workers in cinema to work on the movie. So in Afghanistan the scary part of living there at this time is you don’t know who is your friend and who is your enemy.  You don’t know who is going to cut your throat in the morning and who is going to save you if somebody comes and tries to cut your throat.  It’s a very confusing moment right now and... that is probably the scariest thing of all because trust is just nonexistent.

And we got a lot of threats to shut off the set or they’re going to blow up the set and we got threats in the hotel that they were going to come and kill us all and we moved from hotel guest house to guest house, U.N. guest house to change continuously because we just wanted to... for them not to find us comfortable in one place.  For example, I would decided to shoot in the North and I'll find the next... that morning at 4am as we were leaving I would tell all the drivers of the equipment and all that to just go to the South and we were shooting in the South just to build confusion, but even with all that some really scary things happened.

I Don’t Want to Be Equal to a Man