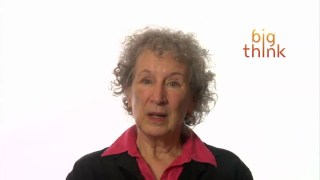 Learning to Hide the Exposition

Authors are always trying to disguise which parts of the novel were most difficult to write. For Atwood those parts are always the exposition, she says.

Question: What is the hardest part about writing fiction?

Margaret Atwood: The hardest part about writing fiction is the part that you know that you have to put in that is expository.  You know, you have to get... it’s like the parts in a stage play where you have to get the characters on and off the stage.  So you have to think of some reason why they’re now going to walk off the stage.  And then you have to make sure that the timing is right to enable them to get off the stage.  So the parts of the novel are the parts when you know there’s stuff the reader has to know, but it’s not very interesting stuff for you to write.  Those are the parts that I don’t like and if you’re competent enough, they won’t be able to tell which those parts are, we hope.  We’re always hoping.  We’re always hoping that the hard parts won’t be found out, if you like.

The other hard part, of course, is when you’ve written a spectacular passage with all kinds of wonderful worlds in it and it’s just great, but it doesn’t fit and you have to take it out. Too bad.

Question: Do you write poetry as well as to prose because one is better suited for exploring certain topics than the other?

Margaret Atwood: I write both because nobody every told me not to do it.  Whereas I understand for people who go to creative writing schools and things they’re told they really should specialize in one or the other, but since I never did that, I’m too old to have done that, it never occurred to me that I shouldn’t be writing whatever I felt like writing.

That said, I think it is partly a matter of wavelengths.  That is, in a poem, everything is very condensed so the waves are very short.  The things that are being rhythmically connected are quite close together.  In a short story, they’re a bit further apart, and in a novel, the waves can be like that, and something that you set up on page 100 and reprise on page 200 may not actually culminate until page 300.  So it’s different from line four reprising line one and then connecting with line eight.  Poems are very condensed, lyric poems.   If you’re writing a long narrative poem, that’s different.  It’s more like a novel.