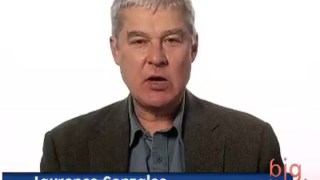 Laurence Gonzales on How to Overcome Intelligent Mistakes

Laurence Gonzales says being aware of our behavioral patterns is the first step in noticing how we make mistakes.

One of the ways that we can mitigate this effect is just simply by knowing about it.  And if you go through the book and you read the whole thing and you come out with a different understanding of the way you behave and the things that cause your behavior and so forth, you will begin catching yourself doing things like this.  One of the other concepts I talked about in “Everyday Survival” is the behavioral script.  That’s the term that I use, there are lots of other terms for it like procedural learning.  But essentially, what it means is that you can automate behavior.  The simplest example is tying your shoes.  Everybody can tie their shoes, you know, without thinking.  You could do it automatically.  But if you try to teach a 3-year-old to tie his shoes, it’s a very laborious process.  It takes a lot of work to get him to do it.  Once he learns to do it, he won’t have to think about it again.  But this is an interesting system because it takes something that requires all of your attention and it turns it into something that requires none of your attention, so that’s a key thing in there.  One of the things that we automate, well, we automate almost everything, but most people have a behavioral script for driving a car, so you can drive a car literally without being aware of what you’re doing.  And so, you can talk on the cellphone and drink your coffee and correct the children in the backseat or daydream or whatever, and be driving and not aware of what you’re doing.  And this could be a very dangerous thing.  One of the examples I use in the book of the system in operation tripping us up is of a famous rock climber named Lynn Hill.  Lynn Hill was arguably the best rock climber in the world at that time and she was preparing to warm up to climb a fairly easy cliff.  And she was just tying her harness, tying her rope to her harness when she was interrupted and she had a little conversation with somebody and then she tied her shoes and went ahead and climb the wall.  When she got up, about 72 feet, she leaned back to rappel and discovered that she hadn’t finished tying her rope and fell to 72 feet.  She would’ve died except she landed in the branches of some trees and that saved her life.  What had happened there is very interesting because she had a behavioral script worked out for tying her rope.  She’d had so much experience; she could do it without thinking.  And she had another behavioral script for tying her shoes, which was very close to the one for tying her rope.  So once she was interrupted and she tied her shoes, her brain accepted that as valid information that she’d finished doing what she needed to do.  And without further deliberation, without further checks and balances, she went ahead and climbed with her rope untied.  And I maintain that most of us are like Lynn Hill, we have an untied knot somewhere in our lives and it’s just waiting for us to put our weight on it.  But by thinking through these things, thinking about these systems and how they control us, we begin to stop ourselves.  I find that my wife and I now, since the publication of “Everyday Survival”, catch ourselves once a week.  We’ll say, “Oops, I just pulled a Lynn Hill,” you know, and we know what it means now because of that.