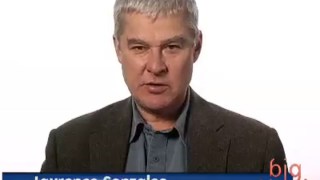 Well, we’re descended from a long, long line of hominids that you can trace back about 30 million years to a time when the Earth was encircled by a great rainforest and it was populated by all kinds of different apes of various kinds.  Somewhere along about 7 to 10 million years ago, our type of creatures split off from the creatures we know as chimpanzees and bonobos, some of the great apes.  And along the line in there, during that 7 to 10 million years, we had creatures like Australopithecus, we had creatures like Homo erectus, our recent ancestors, and the Neanderthals who we may or may not be related to depending on which scientist you talk to, but that lineage, that’s who we are.  And if you look at what happened on Wall Street in the last few months, you see human beings, modern human beings, behaving like apes.  So we’re fully capable of jumping back into this ancestral behavior at times and doing really stupid things even though we’re very smart creatures.  In addition to that, I go into, in the book, some discussions of brain systems that we’ve inherited from these creatures, such as the way we process information.  We don’t really see the world as it is most of the time.  We create simplified models for it that makes us more efficient.  So, for example, if you look at a dog, you don’t have to examine it to see what it is ‘cause you’ve already identified the dog and you’ve stored a simplified model in your head of what it is, so if you see a Great Dane or you see a Chihuahua, you’ll instantly know this is a dog and you could move on from that.  So the system codes everything for us so that we can be very efficient, and what it tells us is you already know what’s going on, you can proceed.  Which in the long haul of evolution was a good thing, but in the modern world, this sometimes a bad thing.  So I go through examples of how this can trip us up.