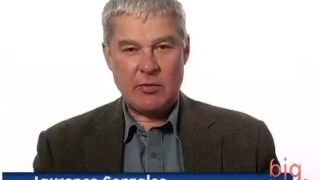 Humans who can maintain the interior orientation and do not resign in the face of external challenges are the long-term survivors Laurence Gonzales writes in his first book.

Question: How do we become good survivors?

Laurence Gonzales:    Well, in “Deep Survival”, the first half of the book is basically talking about how people get themselves into trouble.  The second half of the book is talking about how people get themselves out of trouble.  So for, you know, 150 pages or so, I talked about the answer to your question.  But it comes down to traits that people develop before they need them.  That is to say, once your boat is sinking, it’s not the time to start learning how to be a good survivor, you have to start doing this in your life.  But traits like having a natural tendency to take responsibility for yourself is one of the traits.  There’s a phenomenon in psychology that refers to having either an interior orientation of your thinking or an exterior orientation.  If you have an interior orientation, you believe you can do things to improve your situation.  You believe you have some control over your environment.  This is a good thing for survivors.  The exterior orientation is someone, for example, is always complaining about stuff happening to them, always expecting others to rescue them, people who fall down on the sidewalk and then sue because, like, if somebody should’ve made the sidewalk smoother.  This is not a very good way of thinking if you get into a serious survival situation.  So that’s just one example of the kinds of discussions I have in “Deep Survival” about people’s characteristics.  People who survive well tend to, also, to have a sense of humor about themselves.  They tend to see good in everything that happens.  They see opportunity in misfortune, so even when something really bad happens, they find a way to make it useful.  They also have a very tenacious way of behaving in their lives in general that goes like this, “Well, as long as I can take another breath, there must be something else I can do here so I’m just going to do it even when the situation looks hopeful.”  So there are a whole range of things that I go into the 12 traits of good survivors in the appendix of the book, it’s also on the website deepsurvival.com, people can see these and I go through them and analyze them.

Laurence Gonzales:    Absolutely, yeah.  In fact, “Deep Survival” has found a very wide audience among people who do all sorts of things like manage risk, for example, financial institutional investors and people like that have embraced this book, because it describes a way of thinking that allows you to make better decisions when you’re in either a very tough situation or an ambiguous situation, when the signals about how to make the decision are conflicting and you don’t know, should I jump right or should I jump left.  And so, it really has been embraced by everyone from firefighters to cancer doctors to… it’s used in the military, it’s used in police forces, but it’s also used, you know, in women’s groups, breast cancer survivors and people like that.

Tom Bloch on Teach for America