JEFF JARVIS, author of Gutenberg the Geek (Amazon Publishing), Public Parts: How Sharing in the Digital Age Improves the Way We Work and Live (Simon & Schuster, 2011) and What Would Google Do? (HarperCollins 2009),[…]
Go to Profile 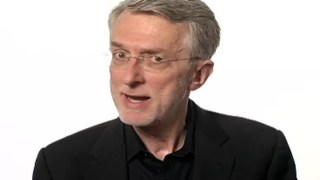 Jeff Jarvis on the Google Killer

Question: Is there a Google Killer out there?

Jeff Jarvis: I don’t see anything on the horizon that can stop Google. And that’s our own fault in the industry because we’ve just really let Google have everything.

The only water to the witch of Google that I can see is openness. Google is not fully open, it is opaque. And so if you look at Google’s response to Facebook, and its sudden dominance of the new “Friend” market, they responded by trying to create with others an open standard for friend relationships online.

And I think that the response to Google would be not another company but an open network. So I argue, for instance, that we should have an open ad network out there that is more transparent than Google’s, that provides some competition to Google and that provides more real value in the market place.

Is the Internet killing the newspaper?