Tyler Volk is a Science Director of Environmental Studies and Professor of Biology at New York University. He is the author of "Death & Sex" (with co-author Dorion Sagan), "CO2[…]
Go to Profile 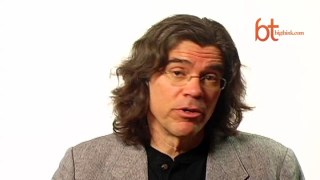 How We Live Off the Dead

The interplay between the dead and the living—the miraculous “webbing of nature in which death becomes life and life becomes death…around and around”—not only stands as the basis of our ecosystem, it enhances life on earth by a factor of about 200.

Question: How do the dead pervade our ecosystem?

Tyler Volk: Walk in the woods and the whole forest floor is filled with the litter of the trees, the dead material from the trees that’s fallen down to the forest floor and is feeding the creatures in the soil. There’s a lot of life in the soil, many species of bacteria we don’t yet know, a lot of worms, other creepy crawly things in the soil. They’re basically living on the ****, the dead material that’s coming from above either in the form of dead parts of plants, entire plants, dead animals, waste products from animals, mushrooms rise and then die and fall back to the forest floor. And so the whole ecosystem is working by the efficient recycling of the dead. We can put a number on that in the following way. We can put a number on how the recycling of the dead actually enhances life. We can see it happening on the forest floor, but I’ll just walk you through the number.

The total amount of carbon that photosynthesizing plants and algae require on an annual basis is about 100 billion tons of carbon that they incorporate, they either pull it in from the ocean water in the case of algae, or pulling it in from the air going into the leaves of plants, in the case of trees and other plants on land; about 100 billions tons of carbon a year. We can ask, what if plants had to rely on, what if the plants and algae had to rely on new carbon that was coming up from deep going into the atmosphere and ocean from volcanoes, from the dissolution of rocks that contain carbon? And that amount is about one-half of a billion tons per year. So, where the photosynthesizers to rely on this carbon coming up from deep that’s fresh going up into the ocean and atmosphere? That’s only ½ billion tons per year. Current abundance, the beautiful abundance of green life on the planet is requiring about 100 billion tons of carbon per year. So, it’s a 200 to one ratio. And they get this 199 parts over the half billion tons that come up fresh from below from the recycling of organisms. From our breaths, from the breaths of the elephants, the eagles, from the breaths of the snakes, from the breaths of the bacteria, or the gases being put out as waste products from bacteria. That’s really the bulk of this recycling, from the bacteria in the ocean and the soil.

And so, one can say that from the efficient recycling of the dead and the fact that the creatures that are putting forth Co2, such as ourselves, are living on the dead because we are going to eat animals that ate the plants. So, there’s death to support our bodies, that this webbing of nature in which death becomes life and life becomes death around and around, enhances life we can say approximately 200 times. There’s approximately 200 times more life on the planet with this networking of life and death that happens.

Question: How large of a role do decomposed human bodies play in this?

Tyler Volk: Humans are part of this, but we are relatively small in terms of our bodies decomposing and going into the cycle. The big carbon fluxes are really in the realm of all plants, the bacteria in the soil. We are creating more and more carbon fluxes – we are putting more and more of the earth’s carbon fluxes in these earth cycles under our own control with taking over 10% of the planet, using 10% of the planet for agriculture and another 10% to 20% for grazing of various kinds and the fisheries. So, with our population, we are bringing more of this death and life cycle under control. The actual contributions of our bodies dying, of course, are relatively small compared to these larger pictures.
Up Next