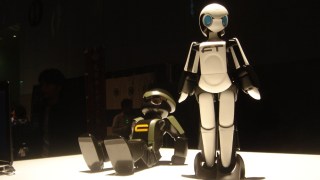 How to Stop Robots From Killing Us

Even if computer technology continues to double every 18 months—which is doubtful—we could put a chip in robots’ brains to shut them off if they start to get murderous.

Question: Do you believe in the coming singularity?

Michio Kaku: There was a conference out of Sylmar that made headlines around the world.  The brightest minds of artificial intelligence converged onto Sylmar and a reporter asked them a question" "When will this fabled singularity take place?  When will the machines take over?  When will machines become smarter than us?"

Well the answer was quite interesting.  Among the top people assembled in one place the answers were anything from 20 years in the future to 1,000 years in the future—with some AI experts saying never.  Some people put it at 2029.  They even give you an exact date.  2029, that’s going to be the moment of truth that one day a robot will wake up, wake up in the laboratory, look around and say, “I am aware.”  “I’m just as smart as you.”  “In fact, I could be even smarter if I put a few more chips in my brain.”

Other people say: "Not so fast, not so fast because Moore’s law is going to break down."  The reason why many people are so confident about this prediction of the so called singularity is because of Moore’s law that computer power doubles every 18 months and it’s a curve that has held sway for 50 years.  If you go back 100 years back to the time of mechanical hand-crank computers, put that into Moore’s law and you still get a nice fit, so believe it or not Moore’s law has been in operation for about 100 years, going back to hand-crank calculators with computer power doubling every 18 months.

Well can this go on forever?  And the answer is no because eventually physics takes over and that is physics says that silicon is unstable at the molecular level.  Transistors get so small, so powerful and they generate so much heat that the silicon chip melts and electrons leak out because of the Heisenberg Uncertainty Principle.  You don’t know where the electron is anymore.  Therefore, we physicists are looking for replacements for silicon.  The post-silicon era will be about 10 to 15 years in the future.  Silicon Valley could become a rust belt.  Think about it, every Christmas your PCs, your computers, your gadgets will be just as powerful as they were the previous year and then the question is are you going to buy?  Are you going to buy any more computer products for Christmastime knowing that they’re just as powerful as they were the previous year?  Probably not. Which means that the computer industry could begin to shake as a consequence.

So my answer is I don’t know.   All I’m saying is there is vast uncertainties in projecting Moore’s law into the future.  However, I would say by end of the century it is definitely conceivable that if we work out the technical problems we might be able to create machines that are as smart as us.  Right now our machines are as smart as insects.  Eventually they’ll be smart as mice.  After that they’ll be smart as dogs and cats.  Probably by the end of the century, who knows, they’ll be as smart as monkeys.  At that point they could become potentially dangerous because monkeys can formulate their own plans.  They don’t have to listen to you.  They can formulate their own strategies, their own goals and I would say therefore at that point let’s put a chip in their brain to shut them off if they get murderous thoughts.  Isaac Asimov advocated something like that with his "Three Laws."  I say hey, put a chip in their brain to shut them off if they start to get murderous.

Inventions of the Future