John A. Allison IV is the former CEO of and acting Chairman of BB&T, one of the largest banks in America. Allison was recently named one of the best CEOs[…]
Go to Profile 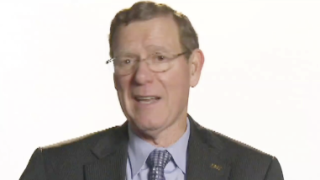 How the Fed Caused the Crisis

After years of poor policies, sponsorship of two reckless enterprises, and a bumbling mismanagement of the housing bubble, the blame for the crisis lies squarely with the government.

Question: What bank regulatory mechanisms, if any, might have prevented the crises? (Dan Indiviglio, The Atlantic Business Channel):

John Allison: In my opinion, the crisis was primarily created by government policies, specifically the Federal Reserve putting in too much money under Greenspan where we had negative real interest rates for two years. And then Bernanke inverted interest rates, which created terrible pressure on bank margins. We couldn’t have had a bubble in the economy if the Fed hadn’t printed too much money. It ended up in the housing market because of Freddie Mac and Fannie Mae, these two giant government sponsored enterprises. So it wasn’t really the regulatory structure that created the problems, it was government policy from the Fed and through Freddie Mac and Fannie Mae.

What is irony is the perception that the banking industry was de-regulated. In fact, the regulatory environment during the bubble, was the worst in my career, it was just mis-regulation, it was a huge amount of focus on—you see a huge amount of focus on the Patriot Act, and no focus really on traditional risk management. So they contributed to the crises more in an indirect way, but the real cause of the misallocations in the economic system came from the Federal Reserve and Freddie Mac and Fannie Mae.

Question: What was your experience in dealing with the Treasury’s bank bailout?: (Dan Indiviglio, The Atlantic Business Channel)

John Allison: I was very opposed to the TARP program. In fact, I wrote congress and tried very hard to keep TARP from happening. Unfortunately, however, once TARP was approved by Congress, there was significant regulatory pressure placed on all the large financial institutions to participate in TARP, particularly on all the $100 billion and over banks. The pressure was based on Bernanke’s study of the Great Depression, where Roosevelt tried to bail out individual companies and the market reacted when he did that. At the time that TARP was instituted, there were three large financial institutions that were under stress, but Bernanke didn’t want to bail those three out, because it’d be obvious he was helping them, so he used regulatory, I mean, intense regulatory pressure, to encourage all the $100 billion and over institutions to participate.

Question: Why was TARP so costly to BB&T?

John Allison: All the large financial institutions, the $100 billion-plus institutions were basically strongly encouraged, effectively forced to participate in TARP because the Federal Reserve didn’t want the market to know the specific institutions that were being bailed out and by encouraging everybody, including the strong institutions, to participate, they obscured the fact that certain institutions were being saved. If you didn’t need the capital, the fact that you had to pay a very high interest rate and give warrants to the government was very expensive. In our case, that was several hundred million dollars, probably, and it turned out when they did the stress test, we really didn’t need the capital anyway. So I thought it was a redistribution from the healthy institutions to the unhealthy institutions and not good government policy, although they had created such a panic, they may have needed to do something, but I don’t think TARP was the answer.

Question: What do you feel will be the long-term consequences of TARP?

John Allison: I think the long-term consequences are very negative and the classic example is GMAC. GMAC is the automobile finance arm of General Motors. GMAC contributed a lot to the problem we have in the automobile business, in order to sell automobiles a number of years ago, they invented the 100 percent car loan, payable over seven years. And what that meant is most people owed more on their car than it was worth after three or four years so they can’t go buy a new car. And now, and of course, GMAC got a lot of cars back and had huge losses in that regard. And now the government keeps pouring money into GMAC, keeping them in business under the theory that there’s no financing for automobiles, which is not true. People like us are in the car business, we just aren’t going to do the dumb stuff that GMAC is doing. You can’t misallocate capital, invest in things that shouldn’t be done, and raise your standard of living in the long term, and that’s what government policy is doing. So poorly run institutions need to fail and then that capital gets reallocated to better-run institutions. That’s the way markets work. You have to have a down side. And I do think that the healthy institutions have definitely been hurt, hurt badly by keeping the unhealthy institutions in business because these unhealthy competitors are continuing to do things that drive down margins of profitability for the healthy institutions. You could see healthy institutions in trouble because of keeping the unhealthy in busines