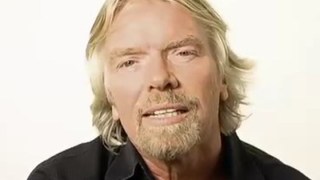 When did Branson decide to give back?

Question: What impact does your work have on the world?

Richard Branson: I think that it’s maybe too soon to say, “What is Virgin beyond the Virgin brand?”

Virgin will mean different things to different people. You know I’d like to think we’ve transformed people’s way of traveling on planes. Before we started out 21 years ago, the experience was diabolical. You were lucky enough to have a chicken dumped in your lap, let alone having any entertainment system to watch. And let alone having a cabin crew person who actually smiled at you. That that’s one example where we came and we shook up an industry.

And other airlines – I think apart from American carriers – have moved forward with the times and have tried to catch up.

And I think we’ve done that to quite a lot of industries.

And the rail industry, when we took it over 10 years ago, it was worse than India. And we’ve now made it the best in Europe and something which British people can be proud of.

And that’s our reason for being. We just love going into sectors where things are badly run and seeing if we can really change them.

At the same time, we have 50,000 people at Virgin who want to make a real difference. And Virgin Unite is our charitable arm, and Virgin Unite is doing some wonderful things. And I think actually Virgin one day could be better known for what we can achieve through Virgin Unite than from actually what we’ve achieved in business.  But that’s for another chapter. And we’ve got 20 or 30 years to prove that point.

I mean the president of Nigeria contacted me and said we’ve got planes that crash in West Africa and we don’t have any safe airlines. Could you please come and set up a safe airline for us? Now we never expected to make a lot of money from that, but it’s the right thing to do. So we’ve set up Virgin Nigeria. And now people can fly on a safe airline and know that they can get from A to B safely. And it also will help the economy dramatically.

And then there’s just putting our social skills to the enormous problems of Africa, and generally trying to see whether we can make a real difference there. And that’s something which we’re spending a lot of time and energy on looking at.

And looking at HIV and trying to see whether there’s a different way of saving the millions of lives that have been lost over time.

Looking at malaria, trying to see if there’s different ways of tackling those problems and so on.

What do you do?