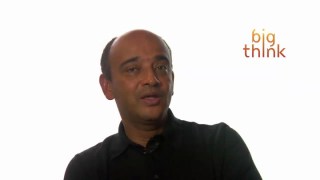 Philosopher Kwame Athony Appiah talks about the difficulty of growing up gay in Ghana and why he is optimistic about the future.

Question: What was your experience like coming out of the closet in an evangelical family in Ghana?

Kwame Anthony Appiah: Well, I would say that, sexuality when I was growing up in Ghana wasn’t a form of identity—gay sexuality—because there just wasn’t a public discourse, there weren’t words for this.  I went to an English boarding school, a boys school, so I pretty quickly acquired the words.  And so I had a sort of language for talking to myself and maybe to some friends in England about my... the discovery that my sexual orientation was that my own sexual desires were directed toward my own sex and not towards women.  But that wasn’t something that—I mean, if I had sort of as it were worn a t-shirt saying I was gay when I was 15 in Ghana, people would have not idea what I was talking about.  That’s changed.  I mean, there is now, there are now gay organizations and the gay movements in Ghana and while the government hasn’t as a whole moved in a bad direction in response to that, I would say there isn’t a huge sort of social consensus on the badness of homosexuality.  There’s still just a lot of people who haven’t thought about it very much and so they will take a view if you give them a view.  If you give them the evangelical view they’ll take that but it’s not because they’re deeply committed to it.

My father is famous in my family that when my father was asked about this, he said, “Well, I can see why you would have sex with a man because sex is pleasurable.  What I can’t see is why you wouldn’t want to have sex with women.”  So, again, this is a different way, this is a different sort of cultural contest for thinking about sexuality.  For many people in Ghana today, I think gay men are men who don’t want to have sex with women, it’s not what they do want to do that interests them, it’s what they don’t want to do.  Though there is a significant evangelical Christian influence from the United States in particular that’s pushing a more American style form of what I regard as homophobia.

As far as my own sort of dealing with these things are concerned, I was raised in a Christian family.  We went to Sunday school, it wasn’t the kind of Sunday school that talked much about that.  I don’t think anyone ever mentioned homosexuality or gayness in church so far as I can recall the whole time during my childhood. This wasn’t one of the things that people were preoccupied with.  My mother was British and... I know one of my sister’s godparents was a gay man, so I assumed she, and it was obvious to me even when I was eight that he was gay, so even though I didn’t have a very well developed sense of what that was.  So I assumed that my parents didn’t think that that was an obstacle.  But my own dealing with it really came from the kind of Protestantism, evangelical—but in this case I would say progressive—evangelical Protestantism, which meant that you took the key thought of the gospels to be that God loved us.  And it seemed to me as I was looking as my sort of own relationship to my sexuality that if I was like this and God loved me, you now, the church might not think it was okay, but it couldn’t be the case that God didn’t.

So I actually didn’t have too hard a time with this and I think I was reconciled with my sexuality as a Christian before I eventually stopped being a Christian.  But this is sort of lucky story turned out well, I think that for people of my generation in Ghana, men and women who discover as they grow up that they have sexual desires for their own sex, it would have been difficult.  And many of them would have left.  I mean, there’s I think a million Ghanaians outside of Ghana, in Amsterdam and New York and London and Manchester and cities like that around – Frankfurt, and cities around Europe and the United States.  And you know, I suspect that a good number of them are gay people who fled to those cities in the way rural gay American fly to cities because in cities you can find other gay people and also perhaps more tolerance of gay people.

But I think Ghana will figure this out.  People in Ghana like sex too much to think that in the end it’s a bad thing.  So my hope is that things will move in the right direction.

Question: Was it difficult to reconcile the conflicting dimensions of your identity?

My father knew how to be a Methodist, a Ghanaian, a Pan-Africanist, a loyal son to the kingdom of Ashanti, a father... And you know, all of those are things were things that can pull you in certain moments in different directions.  Being a loyal Ghanaian meant that you had to go to Parliament and leave the family and not spend as much time with us when we were growing up as he might have, being a cosmopolitan supporter of the United Nations meant that sometime he had to support... he had to be on the side of governments that were opposed to our own government because there are international norms that our own government wasn’t respecting and so on.

So, you know, people have complex identities but it’s one of the things human beings know how to handle.  It’s usually other people that make it difficult for you.  It’s the homophobes that make it difficult for the gay Mormons or the anti-Mormons who make it difficult for the gay Mormons.  And while I don’t want to underestimate the struggling that goes on in the process of dealing with one’s religious identity or one’s sexual orientation as one grows up, these can be – these are challenging difficulties for young people.  Usually the big problems are derived from either what other people do think or what they think other people will think.  Which brings up back to our main topic because at the heart of this is a concern to be respected and to be entitled to respect and to be respected as what one is.  To be respected in spite of being a gay person or in spite of being a Mormon or in spite of being a Catholic or a Jew, but as a Catholic or  a Jew or a Mormon or a gay person.  And one of the things we need to figure out in many of our honor codes is to make them more friendly to all kinds of people who are currently excluded by them and that’s the task I think, not abandoning the honor, but reshaping it to make it supportive of human flourishing, both by using collective honor to get people to engage in the moral revolutions that are necessary and by using individual honor to sustain excellence in human lives.

We Should Be Ashamed of Our Prisons