The world's next superpower might just resurrect the Middle Ages.

Sean McFate
Dr. Sean McFate is an adviser to Oxford University's Centre for Technology and Global Affairs, as well as a professor of strategy at the National Defense University and Georgetown University’s School of Foreign Service in Washington, DC. Additionally, he is the author of several books, including Shadow War, The New Rules of War, and The Modern Mercenary.
16 February, 2019

SEAN MCFATE: The United States, especially, has been now accustomed, for 25 years, as being the universal and unitary superpower. That's not going to last forever. I think most people know this, even though some may be in cognitive dissonance over this. The truth is there are rising powers like Russia and China, but there are other rising powers too. One of our problems is that we live in a state-centric view of the universe. International relations, for most of us, is run by states. Nation states are the global, political unit of the international order. And this is what we learn in social studies as kids. But that is actually not the way the world has worked for most of human history. States are actually about 300 or 400 years old. Before there were states, there were empires, and there were tribes, and everything else. The reign of states and only states can wage war legitimately that is coming to a close. We're actually going back to the status quo ante of when global order was a free-for-all of like the Middle Ages of antiquity, to what came before. And one of the things of that free-for-all is that: Who else were superpowers? It wasn't just states. So in the Middle Ages, the papacy was a superpower. Rich aristocracies were superpowers. Are we going back this world again?

So you know we have random billionaires today who have as much power as states. There are 62 people in the planet who own the equivalent of half the world's wealth. 62 people. You can put them all onto a bus. You have multinational corporations. We have the Fortune 500, which are more powerful than most of the states in the world. Of the 190, 194 states in the world, most are fragile or failed. We only think the top 25 states, like the US, Western Europe, Eastern Asia, et cetera. But that's an anomaly. The vast majority of states in the world are more either regimes hiding inside states or just outright dumpster fires. So what we're going to see in the future is those who have wealth and political power, who can also hire their own private armies now, become super powers. The world used to wage a lot of private war in military history. In fact, most of military history is privatized. Mercenaries have always been a major component of war. And what happens when you privatize war is that now military strategies blend with business ones. And this puts us at risk because our four stars who are in charge of our military and our policymakers are not prepared for that type of warfare.

So mercenaries were around for millennia. Mercenaries have been around since forever. And it's anomalous in history that 150 years ago they sort of went away. And why that is is still a mystery. People say, well, after the 30 Years War, or after the Peace of Westphalia of 1648, where mercenaries ran amok, both rulers and ruled were tired of them, and rulers and kings started to invest in their own standing armies, which is very expensive. I mean, mercenaries are cheaper than standing armies, just like it's cheaper to rent than to own. And countries started to invest in large national militaries. There are reasons for that, some of it was technological, some of it was political, but they monopolized the market for force. Over the next several hundred years, they pushed out mercenaries. They went underground by 1850. And we saw them pop up around the 1950s and '60s in Africa during wars of decolonization, but they were always in the shadows. Now they're returning, and they're up front, whether it's Blackwater for the United States of America or the Wagner Group for Russia, which is a powerful mercenary corporation, or Executive Outcomes in South Africa in the 1990s. We're seeing mercenaries come out of the shadows. And what can put them back in the shadows? Well, only one thing could do it. If all the nations of the world got together and banded together as they did the 1600s, 1700s, and said, no more mercenaries, which I think world peace is easier. So I don't think that's going to happen. Some people put their faith in international public law. The United Nations, the laws of war. I am not one of them. As much as I would love to see that happen, the truth is that international law around war is already very feeble. And let's not forget that mercenaries can shoot your law enforcement. They can shoot them dead. Force is the only commodity that you cannot regulate, because it can resist law enforcement. And this is what makes it so dangerous. And by the way, who's going to go into Syria and arrest all those mercenaries now? Is it going to be the United Nations, the US Marines? I don't think so. So I don't think law is the answer.

I think the most we can do is we can shape the market to incentivize good behavior and blackball bad behavior. But the market for force, which has been with us through all of human history, had a brief hiatus, but it's returning now, and we're not prepared for it. It is one of the biggest security threats of the 21st century, yet we're still focused on ISIS. In some ways, CEOs and Wall Street have more to say about strategy in a future of private warfare than does the Pentagon. And we're not prepared for this.

So for example, one of the things you've got to think about private warfare as a market for force, with supply and demand. Demand are clients, supply are mercenaries. Mercenaries don't want to work themselves out of business. They want to start and elongate wars for profit. When they're out of work, they become bandits, creating artificial demand for the services. One of the things they do a lot, in the Middle Ages, for example, when mercenaries were rampant, is they would get involved in racketeering and extortion. For example, a small private army of mercenaries, say 5,000 mercenaries, shows up to the city of Siena in Italy. And they'd say, we want 5,000 pounds of whatever. We want 5,000 pieces of gold. I'm sort of making that up. And then the people of Siena would, you know, run around and say, OK, well, we'll give you all our gold just so you don't sack us and take our women and children and kill us all. And the mercenaries would say, thank you, we'll be back next year. Right? And so a world awash in mercenaries is a world with more war. And the resurrection of private force is symbolic and emblematic of durable disorder because they'll keep persistent conflict going. They'll contribute to entropy. And let's not also forget that there are clients who do this, as well. So now you have random billionaires, multinational corporations, the extractive industry will start to use private forces to secure their people, their assets, whatever they want to do, or they can wage war for whatever reason they want, no matter how petty. No matter how petty. And having mercenaries available in the world meeting with money lowers the barriers to conflict. It makes going to war easier, and it makes stopping war harder. 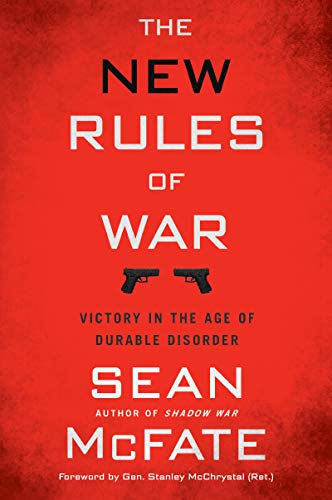 The New Rules of War: Victory in the Age of Durable Disorder
List Price: $29.99
New From: $14.34 in Stock
Used From: $14.70 in Stock
From Your Site Articles
Related Articles Around the Web
capitalism war money economics history military future