David Chang is a Korean-American chef who is known for his unique combination of Asian food and French technique. After graduating Trinity College, Chang worked briefly in the financial services[…]
Go to Profile 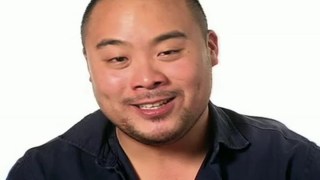 David Chang On Veganism and the Environment

“I don’t wanna live in a world where everyone’s a vegetarian.”

Question: Should we stop eating animals to help the environment?

David Chang:They’re here to serve us.  Environment’s fine. We can do our part and we’re trying to do our part as a restaurant.  We’re recycling oil and the list goes on and on and on.

Just like religion or certain topics like abortion and stuff like that, you’re never going to have an answer that everyone wants to hear on this topic of killing animals for consumption.

It’s never going to go away.  So if you’re going to do it, make sure it’s the closest thing to being the best possible way possible.

And it being environmentally unsound; I don’t want to live in a world where everyone’s a vegetarian. I would be incredibly unhappy if that happened.

Question: If you want to be environmentally conscious, what is a reasonable expectation?

David Chang:I just think people need more awareness in terms of where their food’s coming from.  And I go back to that, I think that alone will help a lot.  I’m not opposed to putting restrictions on it.

Right now we sell obviously a lot of pork.  But if we get pork belly,  there’s two sides of pork belly per pig.  Like these are a lot of animals that are being slaughtered for consumption.

And it would be interesting to be like oh, we’ve met our quota.  We’ve sold all the pork possible.  It would be nice to do that.  In theory, I think that would be wonderful, but I don’t know if that’s practical.

So right now it’s trying to balance what we want to do and what’s actually practical.  And maybe we’ll get there in the future.  I don’t know.

I think there are a lot more problems in the vegetables that we grow than the meat we grow right now.Most of the stuff, whether it’s organic or not; you go to the supermarket, more people are consuming improperly grown vegetables than they are meats.

I think that there needs to be a major shift in terms of how people buy produce, or food in general.  And whether it happens in our lifetime ,I don’t know.

But the only reason we’re doing it because we’ve seen it ourselves and we’re like wow, this actually makes a big difference.  We’d love to buy everything sustainable.  But at the same time, it’s not practical.

So we can do our best and that’s all I can say.  I’m not going to be a crusader or a missionary to do whatever.

But on our end, I know that we try to do our best to do the right thing all the time.  We’re not successful all the time, but at least we try.

Who are the great chefs?