How to find fulfillment: Lessons from ‘dark horse’ success

Can you be happy and successful? Dark horses show us how it's possible.

Todd Rose
Todd Rose is the director of the Mind, Brain, and Education program at the Harvard Graduate School of Education, where he leads the Laboratory for the Science of Individuality. Todd Rose is the author of Dark Horse: Achieving Success Through the Pursuit of Fulfillment
26 October, 2018

TODD ROSE: So, when people think of a dark horse, I think most people think of people who were successful that nobody saw coming. And that's technically true, but in our research, we actually found that dark horses are people who prioritize personal fulfillment over conventional notions of success, and that priority is what actually puts them on a very individual path, but it's also ultimately what allows them to be both successful and happy. And I think those lessons end up being valuable to anybody who wants to live a more fulfilling life.

The origins of Dark Horse are a little bit personal, right. I'm a Harvard professor today, but I also was a high school dropout with a 0.9 GPA; ended up getting married right out of high school, had two kids by the time I was 21, and ended up working a string of minimum wage jobs and was actually on welfare for a little while. So my future was sort of bleak and I felt a bit lost.

It was actually my dad who gave me this piece of advice that changed everything. So he said if I wanted something better, I need to figure out what truly motivated me and stay really close to that the rest of my life. He felt like that was going to be important for me being able to achieve what I could.

And that piece of advice put me on a completely different path that led me to get a GED, then eventually to college, and then ultimately to Harvard where I've spent the last decade getting to study what makes people tick. And so for me, 'Dark Horse' is kind of like the culmination of a lot of things that I care about. Because when I think about how we can use these insights from the science that I'm a part of and other things, I think helping people live more fulfilling lives is probably right at the top of the list.

I think most folks feel like they should know what motivates them, but actually, I think we're actually constantly surprised; we make choices and then we're like, 'I don't really like what I'm doing', but you know, you thought you would—so obviously you don't know what motivates you.

I think there's kind of, for me, there's almost like this laddering of how we get to this, like how do you end up pursuing a fulfilling life? And I think knowing what motivates you is core to that. It's not everything, but if you don't truly know what matters most to you and what really drives you, there's really no chance of having a consistently fulfilling life. You might be successful at some stuff, but you're probably not going to be successful and happy.

And so the interesting thing about it—there are two things that I think are really fascinating that dark horses taught us that are different than the way most of us think about things. So, first is even how we define who we are. Because I think self-knowledge is this vital thing, and most of us when we talk about who we are we tend to think about things like what we're good at or what job we do. Dark horses, right off the bat, they'll talk about the things that motivate them, the things that matter most to them and they build their identity off of that.

So to the question of if knowing what motivates you is so important, why do we struggle to figure that out, and like how could we get better at that? I think that the biggest challenge with the motivation aspect is that when we tend to think about what motivates us, we tend to look at what society tells us we all should be motivated by. If you just look outward, you realize there are some big things, some universal things like competition, money, collaboration, stuff that we all feel affects us in some way. But what we found is—look, the truth is human beings are just more complicated than that, so all of us are motivated by a wide range of things, some of them are those big universals, but what we found is there's also a whole bunch of very specific things that tend to be particular to you as an individual.

So for example, in the Dark Horse Project we actually talked to people who were genuinely motivated by specific things like organizing people's closets—like genuinely motivated! I can't understand that for the life of me. It has zero motivational push. Or aligning physical objects with your hands—like truly motivating. These are so specific they probably don't matter to very many people, but they matter deeply to these individuals. And what dark horses taught us is that when it comes to living a fulfilling life, those specific motives are every bit as important as the big general ones.

So the question of, okay well, how do I figure out those specific ones? There's a pretty straightforward way to get started and it seems simple but it's worth trying. If you just think about some of the things you enjoy doing and ask yourself why—again, this seems simple if you say, "I enjoy football," but it's easy to confuse the thing you enjoy with what motivates you. I'm not motivated by football, I just enjoy that activity. I enjoy watching it, but then I ask: Is it the competition? Is it that it's a team sport and it requires collaboration and coordination? Is it that there's a strategy element to it? Is it playing outdoors? And the more you can sort of dissect that and answer those questions, you start to get a sense for what really motivates you. And if you ask yourself that question often enough it will pretty quickly reveal the sort of breadth of your motives, and that can put you on a path to a fulfilling life.

Why this is important is, most people would stop at, "I can tell you the things I like to do" or "I can tell you that I like my job right now, but I can't actually tell you why," and so you get locked into "I'm a football guy." Now if I can't play football anymore, which I definitely can't, what do I do? I suddenly have this crisis of, "I don't know who I am."

But if you understood that the reason you enjoyed football were these four or five things, those travel well. You can actually look for other things to do that check those boxes that will turn out to be every bit as fulfilling to you. And dark horses are really good at that, this like knowing deeply this breadth of motives they have and then being able to make decisions off of them. 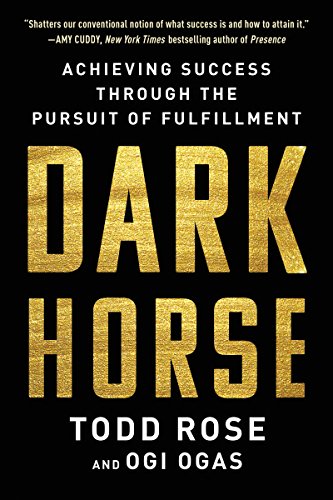