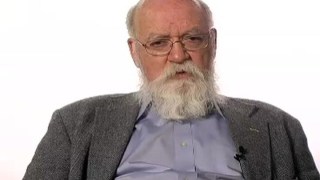 Daniel Dennett on the future of the human brain.

Daniel Dennett:   We’re all pretty rational.  It’s quite a robust thinking system that we’ve got between our ears. But what’s going to happen, and has been happening for several millennia now, is we’re going to develop more and better thinking tools and we’re going to identify more weakness in our rationality. And a weakness identified is at least something that can be avoided to some degree, we can learn work-arounds, we can recognize that we’re suckers for certain sorts of bad ideas and alerted to that we can, we can flag them when they come up.

I think that process of self-knowledge and self-purification, of reasoning processes, will continue slowly to develop.  So it’s not so much, although it might include the development of actual software technology to help us think, that’s part of it, as we all know, but also just the self-knowledge that alerts us to foibles, blind spots in our own thinking.  We probably can’t repair them with any technology. We might not want to repair them. The cost might be too great; might stunt us in some other way. But at least we can nail them.

And of course that idea is an ancient idea that goes way back to Socrates--know thy self. That’s Socratic injunction; even following it for several millennia with good results.