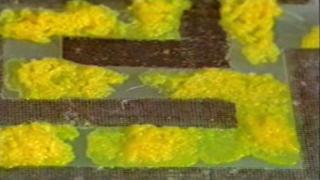 It turns out we’re not the only species that assembles ourselves into networks, says sociologist Nicholas Christakis. Consider the slime mold.

NC: It turns out we’re not the only species that assembles ourselves into networks and gives rise to others sorts of special properties and so to push this point home, this point about emergence, this idea that collectivities can have properties that are not present in the individuals themselves let’s consider a further example.  This is a slime mold.  It is a primitive amoeboid fungus and all this fungus does I digest wood, so this thing lives on the forest floor and if you have ever lifted up like a pile of leaves in the fall and they are wet and soggy and you see those little white tubes under that is what this thing is doing.  The little fungus forms connections to other nearby fungi.  They fuse and they make these long tubes and they digest wood and they distribute the waste from their digestion through these tubes.  But it turns out individuals of this species in connecting to each other form a kind of super organism with unexpected properties.  For example, they can solve mazes.So if you take a maze and you put it on a kind of **** plate and you put food at two different spots, the entrance and the exit to the maze and by food here I mean something like wood or like an oat flake.  If you put oat flakes at the entrance or the exit of the maze this simple organism will change its shape and connect to the two sources of food by finding the minimum path length solution between the two points.  If parts of the organism are spread out on the gel they will reassemble to form a kind of single super organism and so it **** a kind of maze solving property, a kind of primitive intelligence that is not present in the individual organisms themselves and this work was done by a Japanese mycologist by the name of Toshi Nagagaki [ph].So here you are.  Here is the maze.  The amoeboid fungus is bubbling up and connecting to each other.  There is the oat flakes at the entrance and the exit.  It is surrounding the whole plate and you’re going to see that all the paths are going to die back except for the one shortest path through the maze.  In fact, this amoeboid fungus is better able to solve mazes then Toshi’s graduate students, not better than my graduate students thank goodness.  It is able to find the shortest, most efficient path through the maze.  It is able to find the shortest, most efficient path through the maze.  This maze solving ability is an emergent property of the amoeboid fungus.So it is obviously not a single amoeboid fungus that is solving this maze.  It is the fungi working collectively that give rise to this property, this maze solving ability that emerges from their interactions.

Obviously if you ask can this amoeboid fungus solve a maze the answer is no, but the maze solving ability emerges as a result of the interactions.  In fact, you can use this kind of maze solving ability or this ability to find the optimal paths to do other sorts of things like here we show an image on the left is the rail network designed by human beings in England and on the right is some work done by my colleague Mark Fricker [ph] at Oxford University.  He took the map of England and he put little oat flakes at every city and he plated the amoeboid fungus and the amoeboid fungus gave rise to a path connecting or a set of paths connecting the oat flakes that actually imitated and in many ways was better than the rail network the human beings had designed over 200 years, so if you look at these two things side by side you see that the fungus is able to design a railway system for England, in fact, a better system than the one that they have.

Bilingualism Will Supercharge Your Baby’s Brain