Sam Wang is an associate professor, Department of Molecular Biology and the Princeton Neuroscience Institute.  Wang grew up in California and studied physics at the California Institute of Technology. Seeking[…]
Go to Profile 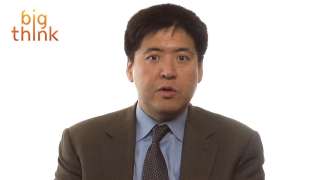 Bilingualism Will Supercharge Your Baby’s Brain

Want to give you baby an edge? Raise them bilingual. Children who are exposed to multiple languages before their first birthday enjoy many cognitive and intellectual benefits throughout childhood and later in life.

Sam Wang: If children are exposed to two languages before their first birthday, this has unanticipated benefits. You can measure them in the laboratories when you bring these babies in.  They are better able to, for instance, resolve conflict cues. They are better able to unlearn a rule that they learned.  So for instance, if they learn that pulling on a string leads to a mobile moving or something else that they like, if the rule suddenly changes, they’re more rapidly able to resolve that conflict and learn the new rule.

And so one thing that’s interesting is that there seem to be ancillary benefits that come from learning a second language that don’t seem to have anything to do with the learning of the language itself.  A relatively advanced version of this is something that psychologists call “The Stroop Task.”  If I show you the letter… the word “red,” except it’s written in green ink, and you have to say, “Well, what color is that in? and it says “red” and you have to resist the impulse to say “red,” and you say, “It’s in green ink.”  Children who are bilingual are better at this Stroop Task. They’re better at resolving those kinds of cues.

So you get lots and lots of benefits from being bilingual, and this persists throughout life.  It’s even been demonstrated that whatever demands that bilingual makes on our brains continue all the way through life.

Directed / Produced by
Jonathan Fowler & Elizabeth Rodd
Up Next