Born in Paris, Françoise Mouly studied architecture at the Ecole Nationale Supérieure des Beaux Arts, and moved to New York in 1974. She founded Raw Books & Graphics in 1977 and[…]
Go to Profile 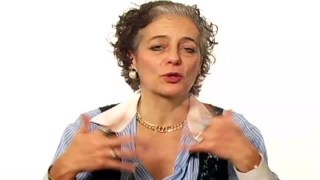 Could a medium once scorned as trash be a better teaching tool than the traditional picture book?

Question: What can comic books do for young children that traditional picture books can’t?

Francoise Mouly: The reason I started to do comics for kids, the real reason is because it worked for me. When my children were young there is a point where they were in first grade and they were told by April you have to know how to read and it worked for my daughter, but with my son, I mean same environment, very bright kid. We had always read to him. Loved being read to, but the light bulb that goes on that makes him a fluent reader it just took much longer and since my husband was reading American literature… I always spoke French to my kids, so I was reading in French. We needed something that would sustain his interest and lo and behold it turns out that the culture I come from, French comics, has marvelous offerings for young kids, not just Tintin and Asterix, but Boule et Bill, just hundreds of really great kid’s comics, so every night it was a pleasure and the reason why a kid who loves being read to will pay attention to the comics better than he would to an illustrated text is that there is something for him or her to follow on the page. There is a visual flow. There is a visual narrative that is implicitly understandable even when you don’t understand the words and in a good comic, and they are hard to find, but good comics have parallel intertwined narratives. It’s not just picture, repetition in the words. There is a lot of information that is communicated visually and it’s a perfect point of entry. What we’ve been saying is that comics are a gateway into literature.