From computer hacking to biohacking, Dave Asprey has embarked on a quest to reverse the aging process.

DAVE ASPREY: When I was 14 I was diagnosed with arthritis in my knees. And I remember, going home, I was shaken. Because in my mind, as a 14-year-old, I said, look, this is a disease that old people get. And now that I'm 46-- when I say "old people," I'm talking about people that I respect and admire, the sources of wisdom. And I cultivate friends, when I can find them, at least twice as old as I am, because they know all the stuff that I haven't learned yet.

But at the time, I said, I'm young. I'm a teenager. I'm not supposed to be experiencing this. And I was dealing with metabolic issues. I already had stretch marks that still cover me. I hit 300 pounds in my very early 20's. And I started having brain fog in my mid-20's. I was diagnosed with high risk of stroke and heart attack-- very high risk-- as circled by the doctor when I was 29 years old. It turns out I was dealing with all the stuff that normally hits you when you're 60-plus. And I was doing it as a young man. And it scared the heck out of me. And it did that because no one likes to look in the mirror at a time you're supposed to be growing your career and say, I can't remember what happened in that meeting. It's just gone. And I'm so tired. I just can't put one foot in front of the other. But I'm going to do it someway anyway.

It turned out that the people who knew how to fix this weren't my doctor. My doctor told me vitamin C would actually kill me, believe it or not. So I fired him. And for four years, I became my own scientist. Fortunately, I'm a computer hacker, and I know how to do that kind of thing. But then I hooked up with an anti-aging nonprofit group. And I started hanging out with these people full of wisdom who are making themselves younger. And the stuff that they knew, the things I was learning from them and from the top researchers in the world, they made me better.

They gave me the tools of what became biohacking, a movement of people that's now even a word in the dictionary. It didn't exist eight years ago. Well, it turns out that those tools that make older people young make younger people kick ass. And that's been a foundational thing for what I've done with Bulletproof and for what's changed my life in a very dramatic way. I'm about 10%, maybe 10.2% body fat right now. I don't experience hunger on a regular basis. I love what I eat. I have more energy at 46 than I did at 26. I feel amazing. My brain works. I can remember all the things I want to remember. I don't drop words. And it's been absolutely liberating. It also cost a million dollars along the way. And that is completely unfair.

Now, I am very fortunate that I was able to do that, because I worked at the company that held Google's first servers when Google was two servers and two guys. So I had a leg up early on, and I was able to spend myself to wellness, to make a lot of mistakes, to waste a lot of money getting younger, and then to say, all right, how do I go beyond getting younger? And it is that deep knowledge of 20 years of working with the world's best anti-aging researchers and scientists, and reading the papers, and doing the work, and trying it myself that led me to say, with reasonable confidence, look, I'm going to make it to at least 180 if I want to. And that's not the cap, that's the floor.

All right, let me see. Now, if we wanted to be ridiculous and you wanted to be like, here's an anti-aging thing, I can do something like this on camera. I'll just be like, how many people do you know with flexibility like they're teenagers? Do you want to do that? BIG THINK: We just got it. DAVE ASPREY: [LAUGHS] BIG THINK: Yeah. 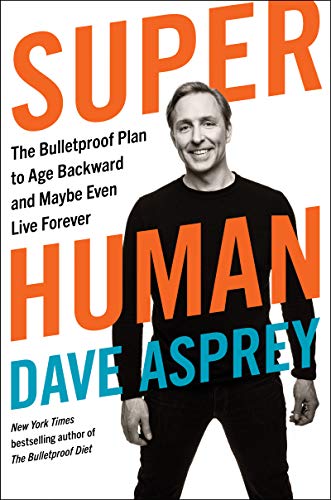