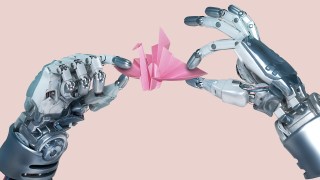 There’s One Quality That Makes Humans Creative. Can AI Learn It?

Can computers be creative? Depends on whether you're asking it to write music or write a novel.
▸
6 min
—
with
Andrew McAfee

You’re probably reading this from either a smartphone or a laptop. It’s no small secret that the device you’re looking at can create works of art… if you put your mind to it. But therein lies the point that Andrew McAfee makes in this video: you need to put your own creativity into the computer for it to work. Interestingly enough, computers are pretty adept at creating architecture and music. This is largely because what is pleasing to the quote-unquote “Western aesthetic mind” is easy to replicate. Music follows a formula, as does pleasing architecture and design. But when AI tries to replicate the human condition, or relate in any way to emotions and feelings, that is where even the smartest computer brains fails. Great news for all us writers out there. Not so great for all the graphic designers, though!

The Second Machine Age: Work, Progress, and Prosperity in a Time of Brilliant Technologies

Andrew McAfee: Just about every time that I get involved in a discussion or a conversation about technological progress and how it can take away jobs from people and how it can automate away things that people used to do, one of the first things that people talk about this irreplaceable human skill is creativity, is coming up with some kind of eureka. And I think that is simultaneously correct and not correct at all. And let me talk first about the way that it's not correct at all. There are lots of different definitions of creativity out there. One of them that I walk around with is the ability to come up with a powerful or a useful legitimately novel idea. I think that's what creative people, whether they are innovators or entrepreneurs or investors or musicians or painters, a lot of what I think of as creativity is this eureka, this coming up with something that's valuable or valued and also pretty novel. Machines can do that now by any definition they can do that in lots of different domains. There's a rapidly growing field called generative design and what that means is if you feed into a modern piece of technology the specifications that you want this building to be able to handle or this heat exchanger or the frame of a car or some kind of part out there in the physical world that has to meet some performance specifications or fit inside some performance envelope we've got software that will generate a part that will do that admirably.

And what's interesting is when you couple that software to a 3-D printer you print out these arbitrarily complex shapes that do exactly what you want them to do. They're typically very, very high performing, they're typically very efficient. They very often look different than what a human designer would come up with. When I look at the parts that get churned out by generative design software they look skulls or skeletons or exoskeletons that you see in nature and I was initially surprised by that. I don't think I should be surprised by that, the forms that nature produces are by definition really, really useful and really efficient because they've survived all the evolutionary challenges in history so far and arrived at this point so they're really beautiful objects. Generative design software can turn out objects like that now that remind me a lot of things that we see in the natural world. They look different than what human designers come up with. They perform better in many cases than what human designers come up with. I would call the work of design a very creative endeavor. We have technology that's now good at that.

There's also technology that can compose music in almost any style that you suggest. And there's an interesting phenomenon going on there: when people know in advance that they're going to be listening to computer generated music they very often dismiss it as shallow or trivial or obviously not coming from a human composer's mind and heart. When listeners don't know in advance that they're listening to computer generated music they very often find it as evocative, as beautiful, as moving as anything a human being would come up with. I guess we shouldn't be so surprised by that. Human taste in music is not this great unknown. We know some of the rules about what western listeners, for example, find appealing in music. You can bake those rules into software, hit go and generate a lot of music. So again, that's an endeavor where I would've thought of it as creative and computers are clearly doing at least an adequate job, possibly a really, really good job. However, what we haven't seen yet are computers that can turn out lyrics on top of that music that sound anything except either really, really silly or flat out nonsensical and ridiculous.

And if you look at longer form prose that computers generate, they can generate an arbitrarily long novel short story set of pros, whatever, it's gibberish, it's nonsense, it kind of makes your head hurt in not a good way to have to plow through this stuff. And my explanation for why that is is that computers they just don't know anything about the human condition. They're not human. They haven't evolved in this world. They don't live with other people in this world. They're beautiful mimics of a lot of things, but when I think about what truly creative writers and lyricists do is they understand the human condition, they illuminate it and they kind of reflect it back to us in a way that we responded to. I still haven't seen any piece of technology do that.

There's a concept from linguistics that I find it really helpful for understanding computer creativity and the concept from linguistics is called the intuition of the native speaker. And what they mean by that is because I'm a native speaker of English I can immediately look at an English sentence and even before my brain has processed its meaning I know if it's grammatically correct or not. I can scan that way before I even know what I'm doing and I can know if that's a properly constructed English sentence or not. I can't do that for any other language and people who come to English as a later language can't do it nearly as reliably, nearly as quickly as I can. So we native speakers build up this intuition about the languages that we speak. The way I apply that to this notion about digital creativity, we humans have the native speaker's intuition about the human condition, about the human world, about the social environment that we all create. I'm skeptical, I'm a huge optimist about technology. Based on what I've seen so far I am really skeptical that we're going to be able to successfully convey that intuition, even to a really, really big really sophisticated piece of technology or machine learning system. I just think if that day ever comes it is a long, long way away.

The best tactic for science education? Leverage the power of pop culture.