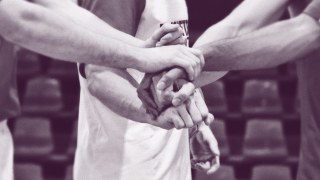 AI might be coming for many of the jobs in the future. But not this kind, and not ever. Here's why.
▸
4 min
—
with
Andrew McAfee

Artificial intelligence is coming. And it’s coming for our jobs (really). Truck drivers. Construction workers. Doctors. Even 39% of the legal aid workforce is set to be AI by 2020, according to Forbes. But there’s a certain sector… and more importantly a certain skill… that robots and AI can never learn: how to inspire. Andrew McAfee uses the example of a girl’s soccer team, positing that it will take robots a truly staggering amount of computing power for AI to even understand what rivalry is, let alone the intricacies of interpersonal communication required to lead a team to do their best work. It’s a great watch, so click play and sit back.

Andrew McAfee: My coauthor Erik Brynjolfsson and I are both at MIT, and we have a colleague at MIT who said something that really helps me understand some of the last human work that I think is ever going to be automated by even really sophisticated technology.
Our colleagues name is Deb Roy. He's at the media lab. And he points out that we humans are incredibly deeply social creatures, we're just a social species. And you say okay so what? So are ants, so are honeybees, so are chimpanzees.

Deb's point is that the nature of human social interaction involves some really deeply rooted social drives that don't appear to be present in any other animal. We came across a great quote when we were writing Machine Platform Crowd from a sociologist or a primatologist who said, “Look, you will never, ever see two chimpanzees carrying a log." That notion of cooperation is absent from even our closest nonhuman relatives.

So that gives me a whole new way to think about the kind of work that's most innately deeply human, it's the work that taps into our social drives. And those drives are both positive—there’s solidarity and pride and compassion for other human beings—and they're negative—they can be envy, they can be shame, they can be jealousy, they can be antipathy towards some kind of other group out there—but we have these drives they are very, very deep, they're very strong and they're kind of hard to fool with technology.

So there are a lot of jobs out there that tap into, that makes use of, that try to harness those social drives. And one of my favorite examples of a job that we don't think of as this incredibly elite job or this incredibly prestigious job but a job that is very unlikely, I believe, to be replaced by technology anytime soon is just a girl's soccer coach.

And that girl's soccer coach may or may not be a strategic genius about the game of soccer, but what that person can do, if they're any good at their job, they can motivate a group of girls to come together to overcome rivalries and jealousies and different kinds of pettiness and play together as a team. They can teach the value of some of those social drives like solidarity. They can help some girls who are natural leaders but might be going through a difficult period in their lives get past that and assume the roles that they're going to be good at. They can just deal in this incredibly rich mix of social things that are going on.

Let's say we could build a computer that could figure out all the different social things that are happening among a group of twenty-five 12-year-old girls. I think that computer is actually a long way off, but let's say we can even build that computer. Would that computer, would that robot be able to motivate those girls, draw them together, tease out what each is really good at, get them to overcome fatigue and self-doubt and all these things, realize if they were having problems in the rest of their lives and how to help them through that? Again, one thing I've learned with technology is “Never say never.” That automatic soccer coach feels like it's a long, long, long way away from me.

So if I take that example and I project it out there are a lot of people who do some work that feels a lot like that and those are teachers, those are managers, those are folk who might be taking care of our more vulnerable populations and I think about the very young, the sick, the elderly, the infirm.

There are a lot of those vulnerable people out there, and because of the richness of our social lives and our social drives I just don't see anyone, even really great innovators, coming up with technologies that could just substitute for the people who are currently doing those very, very social jobs.

Time Is a Puzzle to Scientists, but Your Brain Has It All Figured Out