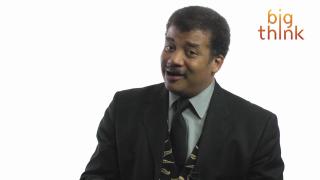 A-to-B Thinking Will Get Us Nowhere

Meeting big, audacious, ambitious goals requires taking multiple steps in reasoning, not just thinking from point A to point B.

Neil deGrasse Tyson: When you think of politics, American politics, 88% of all members of Congress have to be reelected every two years, okay? It’s about 88%. I did the math. So what does that mean? That means a vision statement is hard to implant in the priorities of a politician if they might not be around to follow it through if that vision statement requires longer than two years. So big ideas, big ambitious projects need to be embedded within culture at a level deeper than the political winds. It needs to be deeper than the economic fluctuations that could turn people against an expensive project because they’re on an unemployment line and can’t feed their families.

I assert that a big audacious, ambitious goal in space needs to be conveyed not by A to B thinking. Here’s A to B thinking: “Oh, we need more scientists in society, more engineers, let’s make better science teachers. Oh, okay, we’re done.” No, you’re not done, all right? “I have a good teacher this year.” How about next year? How about the year after? How about where I want to land when I emerge from the educational pipeline? Is there some great project that I can take my ambitions and apply it to? If not, I become something else in life. I become an investment banker or a lawyer or something else where you need good smarts, but it’s not advancing a science or technology frontier.

So the actual explanation requires multiple steps. For example, you double NASA’s budget. The president says we now have real money to explore space. You build a fleet of space vehicles. One will take us back to the moon. We’ll work our way to Mars. There is an asteroid headed our way. I want to check that one out. It’s got our name on it. I want to deflect that one. Okay, put that one on the list too. There are these what are called Langrangian points in the vicinity of orbiting bodies where all forces of gravity balance and you can actually construct large telescopes and other structures there without any kind of—having any stability problems of how much mass is involved in that construction project.

Okay, so you double NASA’s budget.  Space becomes a real frontier, an actual frontier. We’re selecting the next generation of astronauts that they’re in middle school now. As they age they’ll become the age necessary to send them to Mars. In middle school Teen Beat will follow them. If we choose the next astronaut class and they’re in middle school we’re going to want to know what are they eating, how are they doing in their classes, are they behaving themselves, are they hard workers. It will be the next generation’s Mercury Seven. You can galvanize an entire educational pipeline by that one very step.

Then the people who don’t become engaged in the space community, they recognize the value of innovations in science and technology in their lives. You can become a poet, a novelist, an actor, a comedian, but they understand that it is science and technology and innovations in those fields that makes tomorrow come. So if they’re not the ones doing the inventing they vote for those who support those who do.

That is a change in the mindset of a culture that only advancing a space frontier can bring. That’s what I grew up in and it’s not going on now, and I fear for the future of our country. I don’t want this to be the beginning of the end of America. We know how to fix it. The answer is staring us in the face because we’ve done it before.

Is Your Partner a Psychopath? Here’s How to Tell and What You Can Do.