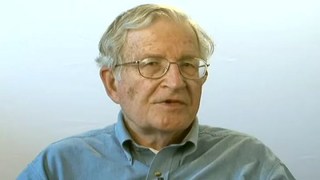 A Real Cure For the Auto Industry

While The Ford Motor Company made news this afternoon with its first quarterly profits in more than four years, Noam Chomsky explains why vague references to ‘cost-cutting’ and a dependence on government programs are exactly the wrong approach to fixing the industry’s deep-seated problems.

Noam Chomsky: The government is continuing the process of effectively dismantling the productive core of the American economy, like the automobile industry.  That's part of the general financialization, the shift of power to finance, to Wall Street, that's been going on for about 30 years.  So it's not being destroyed, it's just domestically being destroyed.  Maybe the same corporations will produce abroad.  Well, that's happening right now.  It's causing a disaster in places like Michigan and Ohio and Indiana.  It's destroying homes, families, communities.

Meanwhile, while this is happening, Obama's Secretary of Transportation [Ray LaHood], is in Europe visiting Spain, trying to work out contracts whereby, say Spain, can use federal stimulus money, taxpayer money, to provide the infrastructure and the technology and the equipment, for high-speed rail transport, which we desperately need.  If the world's going to survive, we're going to have to get off the commitment to very wasteful use of fossil fuels.  That's a state corporate social engineering project that began in the 1940s and it's leading right to disaster.

Society is going to have to be reconstructed massively and one crucial part of it is high-speed transit.  Here we have the government and the corporate sector, dismantling the sector of the industrial apparatus, that could very well produce high-speed transit.  The automobile industry could be re-tooled for high-speed transit.  Much more radical steps have been taken.  So during the Second World War, the industry was almost totally converted to war production in a kind of semi-command economy, it was very successful.  American industrial production almost quadrupled.  It could surely be done here.

But instead of doing that, which would make sense for the population and for our grandchildren—it would help preserve a liveable environment—instead of doing that, Obama is sending his Transportation Secretary to use taxpayer money to get the Spanish to do it for us.  As a commentary on the social and economic system, this is just devastating.

Have you seen a comment about it anywhere?  No, because it's in the interests of the sectors, the few big interests that in fact do run the country, by now, mostly the financial sector.  It's profitable for them. We don't even know what the public wants, because they're not even asked.

It's so remote from consciousness, but I suspect that people would support it and it certainly could be done.

Noam Chomsky on Cutting the Cost of Drugs