A great deal of trouble and debate has recently taken place around monuments to Confederate leaders and soldiers in the United States. Both sides have a well-explained position. Supporters of the monuments offer defenses ranging from “Heritage not Hate” down to a frank acceptance, and appreciation, of the avowed white supremacy of the Confederate States of America. Opponents of the monuments cite that exact white supremacy and history of oppression as a reason to demolish the statues.

It has been suggested by prominent figures that the campaign to remove statues because of the sins of history will have no end, with offending images being found everywhere. Today it will be Robert E. Lee, tomorrow Washington, the next day we might find reason to hate Lincoln. To prevent the descent into revisionist madness, we must stop it before it starts and leave them all standing—so the argument goes.

However, there is a philosophical way of looking at the current arguments to remove Confederate statues. It’s one that dates back to Ancient Greece and suggests that it is not mere revisionism.

In the classic work The Republic, Plato attempts to describe what justice is through an extended study of the ideal city and how it relates to a just man. While his conclusion is not what interests us here, there is one segment, on the decline of the ideal state into tyranny, that does. Plato did not see utopia as the end of history as we do, but rather as subject to decay and only a momentary thing. Since his city-state started out as perfect, any change is for the worse, but it is the inevitability of change that is relevant to us. He has Socrates explain the nature of the changes to a debate partner in this dialogue:

“The accumulation of gold in the treasury of private individuals is the ruin of timocracy; they invent illegal modes of expenditure; for what do they or their wives care about the law?”

“And then one, seeing another grow rich, seeks to rival him, and thus the great mass of the citizens become lovers of money.”

“And so they grow richer and richer, and the more they think of making a fortune the less they think of virtue; for when riches and virtue are placed together in the scales of the balance, the one always rises as the other falls.”

“And in proportion as riches and rich men are honored in the State, virtue and the virtuous are dishonored.”

“And what is honored is cultivated, and that which has no honor is neglected.”

“And so, at last, instead of loving contention and glory, men become lovers of trade and money….

Here, he shows that what is valued in any place inevitably changes over time and that those new values lead to fundamental changes in society. In this case, the increased love of money, and reduced emphasis placed on virtue and vice, leads the aristocratic city-state to become an oligarchic plutocracy. This love of money begets itself, as “what is honored is cultivated.”

This thought is the key to understanding the current debate over Confederate monuments. A statue is an object of art and history, but also of honor. Many names in history have no statues, and the decision to devote resources to producing one means that this person, above all others, is supposed worthy of having a statue. Times, tastes, and values change, and people who were once deemed destined to have a place of honor are sometimes cast aside. With them go their monuments. 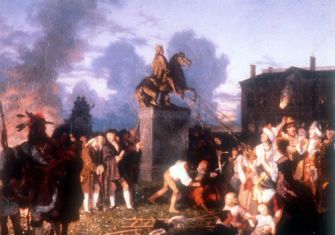 This same principle, “what is honored is cultivated,” is applied in Germany on bans on Nazi imagery. There are no public statues praising Hitler remaining in Berlin, and many sites which were deemed likely to be used as shrines to fascism were demolished or severely altered to prevent that honor from ever materializing. Austria took bold steps this year in the same direction. This same motivation was cited by the University of Texas at Austin in its recent decision to remove its Confederate statues. With university president Greg Fenves saying, “We do not choose our history, but we choose what we honor and celebrate on our campus.”

A notable image of regime, or cultural, change is always the topplingof old monuments to ex-leaders, and it happens everywhere. Rarely are such people accused of trying to re-write history. They are more often praised for taking control of their future. The Germans remember the Nazis, and the Ukrainians remember Stalin. They just don’t have so many statues honoring them in parks anymore.

On a more positive note, there are countless examples of people being images of honor in a society to show that they are noteworthy. Franklin Delano Roosevelt, who founded the March of Dimes, was placed on the dime shortly after his death. Seattle has a statue dedicated to its greatest native guitarist, Jimi Hendrix. Serbia’s greatest scientist, Nikola Tesla, adorns the 100 Dinar note. These great men, seen as worthy of emulation for charity, artistic skill, and scientific achievement, are showcased. The list of similar selections goes on and on—and in the future will grow to include more female icons, another shifting cultural value.

The current movement to dismantle Confederate statues then, from the perspective of Plato, is part of the natural evolution of what is valued in a society. What those values are, and if they are good ones, is another question. What is not questioned is that a society desires and values some things above others and that steps will be taken to promote them. Is rebellion against Lincoln still to be held dear? Perhaps, perhaps not, but it is inaccurate to say that people wish to erase disappointing history; Plato would say they seek to promote what they value. A natural, and perhaps inevitable thing.

Role-playing games like Dungeons and Dragons offer a valuable insight: Life is about shifting labels.
13.8

No matter how hard we try, we will never reach a final theory that unifies scientific knowledge. The very nature of science doesn’t allow it.
13.8

Research shows that psilocybin leads people away from materialism and toward transcendentalism. Apparently, mushrooms teach metaphysics.
Up Next
Starts With A Bang

Will Scientists Ever Discover Life Without A Home Planet?

Atoms can link up to form molecules, including organic molecules and biological processes, in interstellar space as well as on planets. Is it possible that life began not only prior […]