History is not only the stuffing of Wikipedia articles but a live process involving you right now. As is evidenced bluntly by 2020, history is an undeniable force, here to change our societies and force us to re-examine everything we think and know before you can say “news cycle.” So far we’ve had one of the worst pandemics of the modern era, with thousands dead and economic livelihoods uprooted around the world. We’ve had the resurgence of the Black Lives Matter movement, spurred on by the murders of African-Americans by the police, unleashing pent-up frustrations at systemic injustice. We also find ourselves in an amazingly divisive election year, probably one of the worst periods of rancor in the life of the country. American “heroes” are getting re-examined left and right and statues are getting torn down.

All the upheaval places focus on the role of history in our society. How much of it do we want to own up to? How much are current American citizens responsible for the sins of their ancestors? Which men (and yes, mostly these are men) are allowed to stay up as bronze reminders of some heroic past, and which ones need to finally go to the far reaches of our collective unconscious? Do Confederate monuments and statues deserve to stay as part of the legacy of the South, or does it make any sense that a period of history that lasted about 5 years and produced attitudes that were actually defeated in a bloody Civil War is allowed to percolate in the minds of the population? It is as if a tacit agreement was kept up all these years where the victors allowed some such traditions to remain in order to foster a spirit of reconciliation. 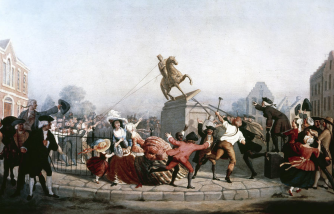 There is a big danger, on the other hand, that as the conversation turns to exorcising ghosts of currently unpopular attitudes, we are doing it through the lens of presentism. It’s a bias of judging the behavior of historical people through the standards of today. Oxford helpfully defines it as “uncritical adherence to present-day attitudes, especially the tendency to interpret past events in terms of modern values and concepts.” We tend to view our present time as the best, most advanced socially and intellectually. And as such judge all others as inferior. While that may be true (certainly debatable), it’s unfair to view how people reacted to situations around them within the constraints and prejudices of the society of their day. It’s probably how people of a couple of hundred years from now will judge us, who still eat meat, as some kind of utter barbarians, a lesser humans.

Our present knowledge comes at the heels of wisdom gathered by generations before us. It is accumulated over time and by that standard should be richer, informed by greater experience and examination. Yet, is it fair to say that a person living 150 years ago should not have had the attitude shared by most people of his or her time, who only knew what they could know by that point in history? The intelligence of societies grows not only intellectually, reshaping their governments, but emotionally. It has taken the world a while to grow in that regard, to become mature in empathy and it’s obviously nowhere near where it should be in such evolution.

As it is biased to judge a person from a different era for not having the moral foresight to stand up to his or her peers and end the tyranny of injustice, that is also no excuse to celebrate attitudes and statements that go squarely against what we believe in now. A bad idea is like a virus. It can take hold and come back quickly, infecting millions. We have all seen that happen too often recently. If you think it’s no big deal to have statues of abolitionists and slave owners around, imagine if you were a Jewish person and had to pass by a statue of Heinrich Himmler, the Nazi architect of the Holocaust, every day on the way to work. It would just casually be there, kept up by people who believed that despite the times he subjected people to inhuman treatment and death, Himmler did a lot of other “good things” and represented the heritage of the people of the town. As that scenario would be unacceptable, so are a lot of statues kept up around the United States as vestiges of a past we do not need to remember with veneration. And for those who are wondering – no, Germany does not have any Nazi statues or memorials around. 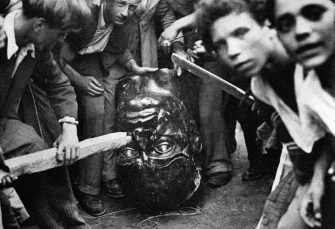 People in Rome tear down the statues of Mussolini. July 25, 1943.Photo by Fototeca Gilardi/Getty Images.

If you think this debate concerns only Southern “heroes,” it took until this year to start taking down statues of Juan de Oñate, the Spanish conquistador who rampaged through what is now New Mexico in the late 1500s. In 1599, he ordered a massacre at the Acoma Pueblo, killing about 500 of its men and 300 women and children. Many were thrown off a tall mesa to their deaths while survivors had their legs cut off. And yet, you could find statues of this man all over New Mexico. Only this year, they started to come down.

Ultimately, there’s a big lesson here for statue-makers and those prone to worshipping idols. Even the Bible spoke about this. Respecting and learning from historical figures is extremely useful and necessary, but putting anyone up on a pedestal is generally a losing proposition. Eastern Europe saw a whole century of statues being torn down every few years in the 1900s – from monarchic rulers to Communist heroes who would fall in and out of favor, then a whole period of pulling down Lenin and Stalin figures in the 90’s. Western Europe had its own idol carousel. Many other countries across the world, who’ve had tumultuous histories and had to undergo historical reckonings did the same. It’s a process that happens in societies that experience change.

Of course, the big question is – how far should this go? How far back do we have to extent the soul-searching to expunge all the wrongs in our country’s past? Do the iconic Presidents get a pass? Are they coming for Mount Rushmore, put up on Native land without permission, and the Washington Monument? Besides being one of the country’s main Founding Fathers, Washington was a lifelong slave-owner who changed his mind about the practice and freed all his slaves by the end of his life – the only Founding Fathers with slaves to do so. 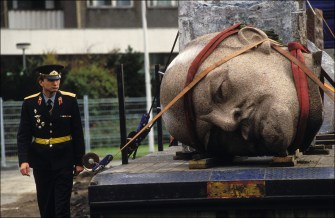 Statue of Lenin in Berlin, Germany On November 13, 1991.Photo by Patrick PIEL/Gamma-Rapho via Getty Images

Removing or altering some of the country’s main symbols is probably a nonstarter at this point. But there can be correct acknowledgements and payments made, according to our current laws. It’s legitimate to have concerns about dangerous ideas from the past but there have to be boundaries and the right pace. When you you start retooling your whole foundational mythology quickly, you get violence and revolutions. People are not going to give up on what they have been taught for generations easily and what is part of their culture. Still, this doesn’t make such conversations not worth having, since what constitutes tribute to Southern heritage and values to some is a continual slap in the face to others, celebrating people who enslaved them and brutalized them for centuries. Status quo is not acceptable in such an equation.

But what about the once-taboo topic of asking national forgiveness with money – paying reparations to people brought to the country as slaves and to Native Americans who were largely exterminated and whose land was taken? In his seminal essay “The Case for Reparations” for The Atlantic, Ta-Nehisi Coates argues that the early American economy was built on slave labor and the wealth that was accumulated on the backs of the enslaved created a tremendous wealth gap that persists today in dramatic fashion, in a ratio of 20 to 1 (of white to black wealth).

“Perhaps no statistic better illustrates the enduring legacy of our country’s shameful history of treating black people as sub-citizens, sub-Americans, and sub-humans than the wealth gap,” he writes. “Reparations would seek to close this chasm. But as surely as the creation of the wealth gap required the cooperation of every aspect of the society, bridging it will require the same.”

Could we achieve such cooperation now? At the moment, only about 20 percent of the American population would support paying reparations to descendants of slaves. 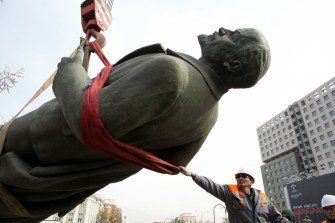 As Ta-Nehisi Coates calls it, the notion of reparations is “frightening” to many because it might incur major economic costs and maybe most importantly, it “threatens something much deeper—America’s heritage, history, and standing in the world.”

While the issue of paying for past sins might further drive a wedge into an already-divided society, Coates believes putting a number on the historical events that led to American prosperity being “ill-gotten and selective in its distribution.”

He further proposes that paying reparations would be more than just a payoff but would lead to “a healing of the American psyche and the banishment of white guilt,” adding “What I’m talking about is a national reckoning that would lead to spiritual renewal.”

The cultural reexamination unleashed by the recent protests linked to widespread police brutality taps into the undercurrents of the American psyche. What’s surprising is that so many Confederate statues can still be found around the U.S. – approximately 1,800 such monuments to be exact. Think about that – almost 2,000 signals of past attitudes that were defeated in a war and have been legislated against since. And yet, there they are, like guardians of not-so-secret inclinations America is unwilling to let go.

As many rightfully fear, however, efforts to tear things down based on the emotion of the moment can lead to mob rule and often less-than-nuanced opinions on history. A country deserves its past and whitewashing it doesn’t change the facts. But all people living in the country today, which is much more diverse and getting more and more so, according to clear census data, have a right to be part of a society that values their sensibilities and respects them equally. Hanging onto to imperfect idols is understandable on the part of a population that is becoming less and less able to wield its will over minorities but ultimately futile, as the statues will come down as they always tend to do. The question is – will they come down as part of an elevated national consciousness or amidst violence? As coronavirus continues to expand its grip on the country, a more measured approach would serve us well.

We don’t know when or how music was originally invented, but we can now track its evolution across space and time thanks to the Global Jukebox.
Thinking

De-extinction, if it is ever possible, will not be simple.
Up Next
Neuropsych

Dating over Zoom? Don’t be surprised if those online sparks fizzle in person

What are the chances that an online connection will lead to true love?