Bastet was the daughter of the sun. The ancient Egyptian goddess was originally a fierce lioness warrior—a strong woman with the head of a big cat. Over time, her image morphed into a recognizable house cat until, as domestication commenced, her role disappeared altogether. I suppose it’s difficult treating the furry purring machine rubbing up against your leg as an all-powerful solar goddess.

Strangely, there aren’t a ton of feline deities. Bastet is by far the most famous. There’s Dawon, the tigress that carries the fierce goddess, Durga, into combat; Bali’s panther god, Barong Ket; Ovinnik, the black cat that chases away evil ghosts on Polish farms; and China’s Li Shou, also revered by farmers for decimating mice and rats. Given their ubiquity in our world, you’d think cats would have a more religious presence.

Perhaps we can point to believers’ lack of appreciation for cats. That’s the topic of a 2019 study, published in the Journal for the Scientific Study of Religion. University of Oklahoma associate professor, Samuel Perry, and Eastern Illinois University assistant professor, Ryan Burge, wanted to gauge pet ownership among church goers. The religious prefer dogs by a wide margin: 74.9 percent to 40.3 percent.

Americans love dogs. With over 70 million claimed, we own 2.5 times as many canines as the runner-up, China. We also love spending money on pets: over $72 billion in 2018. That’s more than on all sports combined.

Previous research points out religious tradition and biblical literalism don’t necessarily predict pet ownership, though the team did discover that evangelicals are less likely to own a pet than progressive faiths. That’s also true for people that attend church most often.

For this study, Perry and Burge used a 2018 survey with 2,348 respondents. Half replied to questions about pet ownership, with mean average of 1.72 pets per household. They broke down statistics on the three largest religious groups: evangelicals, mainline Protestants, and Catholics.

Biblical significance only affects evangelicals. Since the Bible isn’t exactly PETA-friendly, with all the directives about lording over the kingdom, hardcore religious appear less likely to support animal rights and are more likely to tolerate cruelty toward other species.

The most interesting aspect of their study involves speculation about pet owner psychology. Apparently, the most religious households think about what a pet can do instead of adopting them for what they are.

“We would expect that Christian conservatism―as indicated by evangelical affiliation and more literalist interpretations of the Bible―would predict the ownership of family pets that have more practical utility such as dogs, but not necessarily cats.”

Cat owners are often considered isolated, neurotic individuals, whereas “dog people” are social and extraverted. Indeed, dog park visits and walking around the neighborhood appear to be motivating factors for owning a dog. Larger families tend to be more religious and own more dogs as well.

The antisocial aspect of cat owners has recently been downplayed. A few crazy ladies can’t ruin the image for the rest of us. Pet ownership is psychologically healthy: Having an animal reduces your anxiety and depression, as well as increases self-esteem among adults and children. 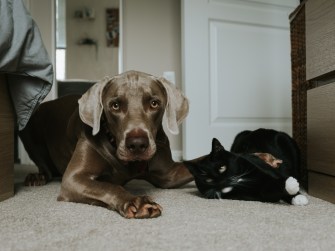 Photo by Tatiana Rodriguez on Unsplash

After over two decades of living with cats, there are two personal notes I have of this and related studies.

While cats are independent animals, they are not antisocial. My wife and I have three cats. Every evening, three cats surround us on the couch; this is an actual photo she snapped while we were watching a movie. Hardly a night passes without all three sleeping on our bed—socially distanced, as cats do. Two hang out in my office daily while I’m writing; the third has claimed a cubby just outside my office door.

Like other animals, cats respond to how you treat them. If you act as if they’re antisocial, they’ll respond in kind. If you regularly play with and hold them, especially from an early age, you’ve got a companion for life. As they are extremely territorial creatures, if you construct a living environment conducive to their needs—lots of places to climb up high and look out windows—they’re going to love living in that environment. Adopting one and refusing to meet them on their terms guarantees antisocial behavior.

The other comment is more speculative. Western religion is based on top-down authority. God gives directives; humans follow. This plays well with the psychology of dogs (which, to be clear, we also love). Dogs understand reward and punishment. If they could read, they’d love the Bible.

Punishment doesn’t work on cats. They’re not designed that way. If you scream at a cat while he’s urinating on your carpet, he’s going to think, “Why is this ape yelling?” not “I shouldn’t be doing this.” You probably shouldn’t own a cat if you can’t come to terms with this feature of their psychology.

If you’re trained to believe in a god that doles out punishment to criminals and rewards the faithful, you’ll inherently understand dogs. By contrast, domesticated cats are the offspring of nature’s fiercest killing machine. They have no need for your punishment or deities, but they will accept your treats. Think of it as tithing.

The human brain makes a striking deviation from the normal building plan.
Up Next
The Future

This wearable robot arm can hold fruit and punch through walls

Researchers are making progress in the effort to develop safe and practical supernumerary robotic limbs.