Imagine all the lives you didn’t live. A life where you never met your partner. Where you never had a brother or sister. Where you got a tattoo. Where that horrible event never happened. Or where one did. The story of your life could be written in a nearly infinite number of ways. When we reflect on the one, narrow, unlikely path that we are on now, it can feel mind-boggling.

This is one of the ideas from Jorge Borges’ short story, “The Library of Babel,” and it has fascinating connections to our world today — and all possible ones.

Borges asks us to imagine an impossibly vast library divided into a series of hexagonal rooms. Every room contains four walls of shelves that hold every possible variation of books there could be. Using 25 characters (including periods, commas, and full stops), the books are seemingly a random mishmash of gibberish. Most of the books in the library are wholly incomprehensible — a letter explosion — but somewhere in the library, there is any book that might ever have been. 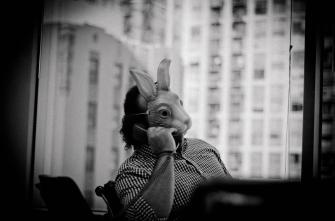 There’s Lord of the Rings with Sauron winning. There’s Harry Potter with Hermione as a Death Eater. There’s the Bible with Jesus being released. But also, there’s the story of every life, including yours. One book in this library will be, word for word, the story of your existence. It will recount your first steps, all of your life events, every word you have uttered, your most private thoughts, and even how you will die.

Borges’ work resists simple interpretation, but one way to view this is through the lens of genetics.

In his book Darwin’s Dangerous Idea, Daniel Dennett remade the idea as “The Library of Mendel.” In this version, you have all the possible genomes of any organism that might exist. Rather than the 25 characters in Borges’ original, in genetics you have only four — A, C, G, and T. We humans have roughly three billion of these “letters” in our genome. If you were to randomly shuffle the letters, it’s mind-boggling to think of the enormous variety of humans there might be — the incredible diversity of minds and talents, as well as of pathologies and disabilities.

Of course, in the same way a random mélange of letters will create a lot of nonsense, a random shuffling of genes most often will create unviable forms of life. Certain genomes will create something that won’t respire, reproduce, metabolize, or function at all. This allows us to appreciate life all the more and to recognize just how unfathomably lucky we are to be here. As evolutionary biologist Richard Dawkins said, “However many ways there may be of being alive, it is certain that there are vastly more ways of being dead.”

Dennett’s Library of Mendel also shows us just how arbitrary and improbable the diversity of our world’s lifeforms actually is. For instance, the story of mankind, of intelligent bipedal primates dominating the world, is simply one story that could have been told. (It could have been lizards.) It’s a story of four letters. It’s the set of improbable random mutations that won.

What could have been

Borges’ Library of Babel is like our universe. Given enough time, every possible story could be told — the insane and the weird, as well as the oh-so-nearly identical. A world where your skin is slimy and green, but also a world where you have one less hair strand. With every huge planetary event, as well as with every microscopic particle collision, the universe continues on one storyline. Viewing things this way gives incredible gravity to our choices.

Every decision we make and every path we choose will echo throughout the universe. When I choose to pick up a coffee with my left hand rather than my right, I have added to and defined the universe’s story. We exist as the latest chapter in the book, and we are helping to write how it will go on. Though I might play an infinitesimal role, I have had the honor of adding my bit to the greatest book of all.

Can a shared language promote peace? Some people think so.
13.8

Einstein did “basic research.” Here’s what that term actually means

What we call “basic research” is actually the most cutting-edge. It underpins knowledge, and without it, technology does not come into being.
Thinking

The “End of Days” defines how we see time.
Smart Skills

To make great changes in your life, follow the philosophy of kaizen

If Rome was not built in a day, why do you think you can be?
The Well

Just as there are many types of believers, there’s not only one type of atheist.
Up Next
High Culture