In his book, Western Muslims and the Future of Islam, Tariq Ramadan argues that too much dialogue between scholars and too few conversations between devotees has led to the religious extremism we are witnessing today. “It is precisely because people do not know one another,” he writes, “or reject one another, that dialogue is impossible.”

Theological rifts are manifold and chronic, a reality made more painful by the similarities between faiths. Nowhere is this more apparent than in the Muslim treatment of Jesus, who was a revered figure and prophet in the Quran. Muslims might not agree with every facet of Christian tradition in this matter, but there are more similarities than one might imagine, while understanding social dynamics sheds light onto the differences.

The people of the books—the three religions known as the Abrahamic religions, given their shared point of origin with Abraham—started with tribal cults in the Levant. The Tanakh covers the relationship of Israelites with God until the construction of the Second Temple during a time when a plethora of local deities dominated the landscape. Roughly 500 years later a young Jewish preacher kicked off a reformation that changed the face of religion forever. To understand the importance of Jesus Christ, just consider that the world marks time because of him.

Abrahamic religions remained relatively local until a missionary campaign by the Roman Empire in the fourth century AD spread Christianity broadly. Both Christianity and Judaism flourished during this era. Theologically, however, Christians believe their savior is the Messiah while Jews reject this idea. For Christians he was destined by God—a belief shared by Muslims. In Islam Jesus was a bringer of scripture, an esteemed position, even as his divine status is denied. 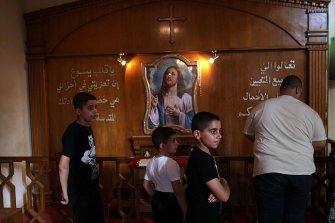 Forming one of the oldest Christian communities of the Middle East, Iraqi Christians have been targeted for attack since 2003, with numerous abductions, murders and threats for them to leave Iraq. In 1980 Iraqi Christians made up over 7% of the population and have now declined to below 3%. Christians across the Middle East have been experiencing similar threats to their communities and businesses as the Arab Spring unleashes pent-up hostilities and economic uncertainty. (Photo by Spencer Platt/Getty Images)

Just as Jesus formulated his beliefs as a response to Jewish bureaucracy masquerading as spirituality, Muhammad was a reformer battling against what he felt to be irreligious practices in and around his native Mecca. Unlike the Bible, the Quran is a direct result of its prophet’s philosophy, collected during Muhammad’s lifetime and written as a collection, ranging from longest to shortest chapters (or suras), shortly after his death. (Commentary on Muhammad’s beliefs began earlier, shortly after his first revelations in 610.) This gives us a clear picture of Muhammad and the foundation of Islam.

In the eyes of Muslims, Jesus was born of a virgin and spoke complete sentences in his cradle. God had informed Mary that her son was a prophet, though according to the Quran Jesus is neither eternal or almighty.The miracles he performed are offered as fact in Islam, which goes into detail about them in Sura 5:110:

Yet the 93 verses of the Quran devoted to Jesus deny the crucifixion and the trinity. The latter is questioned at length in Sura 4:171:

Do not exceed the limits in your religion, and attribute to God nothing except the truth. The Messiah, Jesus, son of Mary, was only a Messenger of God, and His command that He conveyed unto Mary, and a spirit from Him. So believe in God and in His Messengers, and do not say: ‘God is a Trinity.’ Give up this assertion; it would be better for you.

This should not surprise anyone who understands the administrative nature of the Quran compared to the mystical theology of the Bible. American scholar Jane Dammen McAuliffe writes of the foundation of Islam,

She goes on to state that Muhammad’s role was to “convey, not to compose,” offering an important insight into the Muslim treatment of Jesus. If their prophet was not a revolutionary but a translator of sorts, then previous prophets (including but not limited to Jesus) are not divine either. One important directive on this topic is found in Sura 112:1-4:

Say: “God is Unique! God, the Source [of everything]. He has not fathered anyone nor was He fathered, and there is nothing comparable to Him!”

While the metaphysics is apparent here man is not afforded the same status. More importantly, Muslims deny that Jesus could exist on the same field as God. Messiah and messenger, certainly, but of a different magnitude. Islam’s very meaning, “surrender,” requires a certain humility of its adherents. Because of this mindset Jesus’s mortality is apparent. 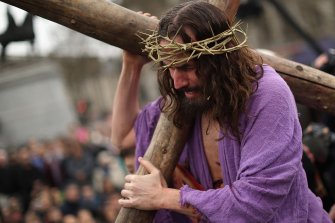 Where does Jesus stand in Islam: Born of a virgin? Yes. Died on the cross as the son of God? No.

The Quran also contradicts some of Jesus’s major teachings. Christians point to the Sermon on the Mount as the epitome of their prophet’s moralistic offerings. His directive to turn the other cheek remains one of his lasting impressions. The Quran views things differently. In Sura 2:174-5 the adherent is instructed to exact revenge in equal measure to the insult: an eye for an eye, tooth for tooth.

Religious scholar Karen Armstrong points out that this is likely because Jesus was never head of state, whereas Muhammad had to concern himself with politics daily. As a philosophy the proverbial other cheek might well be turned, but when you’re dealing with criminals a show of force proved necessary. We don’t even know the extent of Jesus’s politics—he did claim his kingdom was “not of this world.” As a pacifist Jesus was not in control of state affairs, whereas Muhammad’s entire legacy rests on his career in politics.

This is further proof of the disparity between Christian metaphysics and the blood-and-flesh reality of governing an Islamic state. It’s also proof as to why Jesus makes for a revered figure in Islam without being the alpha and omega. While an important and beloved figure in the Muslim creation mythology, he’s still only a segue in the narrative. As Armstrong concludes,

Revelations did not cancel out the messages of earlier prophets; they confirmed and continued them.

This might remain a sticking point in Abrahamic theologies, but as Tariq Ramadan suggests dialogue is more beneficial than silence. Understanding why beliefs arose is the first step in humanizing the people behind each system.

And then, of course, there is Penn Jillette’s take on it all:

Tags
AbrahamicHoly Trinityislamjesus christMuslimProphetQuranreligionson of GodTariq Ramadan
In this article
AbrahamicHoly Trinityislamjesus christMuslimProphetQuranreligionson of GodTariq Ramadan
Related
The Past
How the death of alchemy gave birth to modern science
Far from practicing witchcraft, the experimentation of medieval alchemists helped bring about the Scientific Revolution.
Thinking
Finding your essential self: the ancient philosophy of Zhuangzi explained
Adopting a healthy scepticism towards inherited ideas means “emptying the container of the Self.”
Starts With A Bang
Science won’t ever make philosophy or religion obsolete
The information we have in the Universe is finite and limited, but our curiosity and wonder is forever insatiable. And always will be.
Thinking
Trimurti: Meet the “Holy Trinity” of Hinduism
Hinduism emphasizes the journey, whichever path that takes. And it holds us responsible for our own self-improvement.
Culture & Religion
3 reasons “you” won’t return after this life
The idea that “you” persist after death does not hold up to the current understanding of memory and identity.
Up Next
The Present
Study: More Americans Than Ever Have Serious Mental Illnesses but Fewer Can Get Help
A study finds an increasing number of Americans live with serious mental issues and their access to healthcare is getting worse.