Can we prove that Jesus Christ actually walked the Earth about 2,000 years ago? Without getting into the spiritual, science should be able to provide such an answer for a phenomenon that currently has about 2.2 billion adherents around the world, shouldn’t it? Unfortunately, the truth of the matter is not that simple.

Here are 3 kinds of evidence we have for the existence of Jesus Christ as at the very least a real person (putting aside metaphysical considerations for now):

The supposed time frame of Jesus’s life, starting at year zero, was not a period big on communication. Without the ability to print books, not to mention having no phones or the Internet, it took a while for information to be dispersed. Despite limitations, a few decades following Jesus’s supposed lifetime, mentions of him started to crop up in the writings of Jewish and Roman historians, as well as in dozens of texts by Christians, writes Dr. Simon Gathercole, a New Testament scholar from the University of Cambridge, in the Guardian.

The letters of the apostle Paul from about AD 50-60 are the earliest texts mentioning Jesus and the doctrines of Christianity. They also contained practical instructions for the growing number of Christians on how to live according to their faith.

The first non-Christian writer to talk about Jesus was the Jewish historian Flavius Josephus (born Yosef ben Matityahu),who lived around AD 47-100. He referred to Christ in his history of Judaism “Jewish Antiquities” from AD 93. In the book, Jesus comes up twice – once in a curious passage about Jesus’s supposed brother James and in another paragraph that has since been questioned in its authenticity. Historians think it has been altered by Christians several centuries later who wanted to portray Jesus in a better light. Here is that passage coming from Antiquities 18:3:3:

“There was about this time Jesus, a wise man, if it be lawful to call him a man, for he was a doer of wonderful works—a teacher of such men as receive the truth with pleasure. He drew over to him both many of the Jews, and many of the Gentiles. He was Christ; and when Pilate, at the suggestion of the principal men amongst us, had condemned him to the cross, those that loved him at the first did not forsake him, for he appeared to them alive again the third day, as the divine prophets had foretold these and ten thousand other wonderful things concerning him; and the tribe of Christians, so named from him, are not extinct at this day.”

Roman historians Pliny and Tacitus also wrote about Jesus Christ about 20 years after Josephus’s book. The “Annals” by Tacitus from AD 115 mentioned the Roman prefect Pontius Pilate executing Jesus, alluding to crucifixion, and placed that event within the timeframe that agrees with Christian gospels. As you can also see in this excerpt, Tacitus was not a big fan of the Christians:

“Nero fastened the guilt and inflicted the most exquisite tortures on a class hated for their abominations, called “Chrestians” by the populace,” wrote Tacitus.” Christus, from whom the name had its origin, suffered the extreme penalty during the reign of Tiberius at the hands of one of our procurators, Pontius Pilate, and a most mischievous superstition, thus checked for the moment, again broke out not only in Judaea, the first source of the evil, but even in Rome, where all things hideous and shameful from every part of the world find their center and become popular. Accordingly, an arrest was first made of all who pleaded guilty; then, upon their information, an immense multitude was convicted, not so much of the crime of firing the city, as of hatred against mankind.”

Pliny the Younger, who was also governor in Asia Minor, wrote letters to Emperor Trajan around AD 112 describing Christians worshipping Jesus as a God:

“They (Christians) were in the habit of meeting on a certain fixed day before it was light, when they sang in alternate verses a hymn to Christ, as to a god, and bound themselves by a solemn oath, not to any wicked deeds, but never to commit any fraud, theft or adultery, never to falsify their word, nor deny a trust when they should be called upon to deliver it up; after which it was their custom to separate, and then reassemble to partake of food, but of an ordinary and innocent kind ,” wrote Pliny in Epistles 10.96. 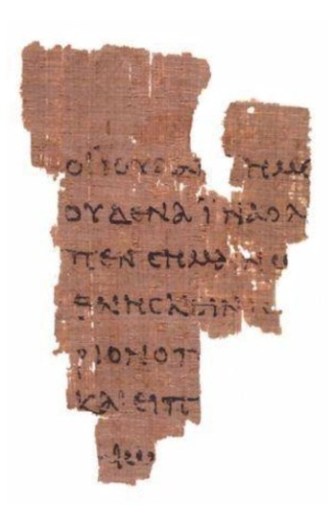 The oldest known manuscript fragment of the New Testament, containing a portion of the Gospel of John. 2nd century AD.

According to Dr. Gathercole, the earliest Christian writings on Jesus come from the epistles of Paul. The first of these date to no later than within 25 years of Jesus’s death (AD 50-60). On the other hand, biographical accounts of Jesus in the New Testament date from around 40 years after Jesus’s death. Still, these time spans mean that accounts of Jesus’s life were written down by people who would have been alive to know him or the people who knew him personally.

The accounts of the witnesses also correspond quite well to what other sources of information tell us about the life in the Palestine of the first century. For example, having large crowds coming to a healer like Jesus is confirmed through archaeology, which tells us that residents of the area had to contend with diseases like leprosy and tuberculosis. A study of burials in Roman Palestine by archaeologist Byron McCane revealed that between two-thirds and three-quarters of the graves they looked at had remains of children and adolescents. McCane underscored the prevalence of childhood mortality at the time, explaining that “during Jesus’ time, getting past 15 was apparently the trick.”

Of course, just having the details of the environment right doesn’t prove that Jesus Christ existed. Dr. Gathercole, thinks it just wouldn’t make sense for the writers of the time to create such an elaborate character, stating: “It is also difficult to imagine why Christian writers would invent such a thoroughly Jewish saviour figure in a time and place – under the aegis of the Roman empire – where there was strong suspicion of Judaism.”

This sentiment is supported by Byron McCane, an archaeologist and history professor at Florida Atlantic University who said in an interview with National Geographic that he “can think of no other example who fits into their time and place so well but people say doesn’t exist.” In other words, it would be rather unprecedented for such a person to be made up. 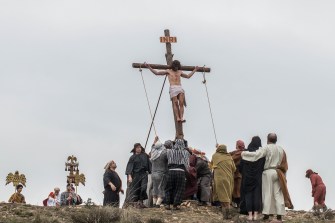 An actor portraying Jesus is crucified as residents of Hiendelaencia dressed in period clothing perform during the reenactment of Christ’s suffering on March 25, 2016 in Hiendelaencina, Spain.

There have been a number of relics associated with Jesus, but none have been proven to be undoubtedly authentic. These include the infamous Shroud of Turin, supposedly the negative image of a man who was allegedly Jesus Christ. Some claim it to be Jesus’s shroud after the crucifixion. The science on the dating and origins the Shroud is very much being debated and doesn’t generally support the claims.

Another famous relic of dubious authenticity is The True Cross. There are hundreds of fragments of wood claimed by various people throughout history as being from the cross used in the Crucifixion of Jesus. Many of these fragments are dispersed in various European Churches despite little confirmation they are real. 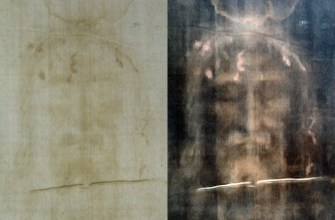 Shroud of Turin. Modern photo of the face, positive left, digitally processed image on the right.

Other Crucifixion-related purported relics include the Crown of Thorns worn by Jesus, the nails used in the cross, or the Veil of Veronica – supposedly used to wipe the sweat from Jesus’s brow when he was carrying the cross.

Based on the evidence we have, can anyone with certainly say Jesus really existed about 2,000 years ago? While incontrovertible proof may be impossible to come by, those who study the period believe there was someone named Jesus Christ living in the area and time period that we generally agree on, said archaeologist Eric Meyers, emeritus professor in Judaic studies at Duke University.

“I don’t know any mainstream scholar who doubts the historicity of Jesus,” said Meyers.”The details have been debated for centuries, but no one who is serious doubts that he’s a historical figure.”

Whether Jesus of Nazareth was the Son of God who could perform miracles is certainly a matter of much different discussion. Israeli archaeologist Yardenna Alexandre inspects Roman 1st century AD pottery found in an excavation which reveals for the first time a Jesus-era house from the Jewish village of Nazareth on December 21, 2009 in this biblical city in northern Israel.

Tags
ancient worldarchaeologychristianityGodhistoryjesus christreligion
In this article
ancient worldarchaeologychristianityGodhistoryjesus christreligion
Related
Strange Maps
The horrors of World War II air war, in one stark map
This graph shows how badly German cities were hit by Allied bombing raids.
High Culture
Why are flood myths so common in stories from ancient cultures around the world?
Could the prevalence of flood myths around the world tell us something about early human migration or even the way our brains work?
The Future
Space travel will radically change human psychology and spirituality
We are traveling in a realm that once exclusively belonged to the gods. Space travel will force humanity to rethink everything.
The Past
The Wild West was lawless and chaotic — and the police helped keep it that way
Lawmen and outlaws were often the same people.
Thinking
6 great philosophers and how they used their political power
Most philosophers merely contemplate the world, but what about the ones who actually tried to change it?
Up Next
Thinking
5 holidays to celebrate this year that aren’t Christmas
Going mad with Christmas cheer? Try one of these alternatives.