Distinguishing between actual news and The Onion has become a tragic sport in recent years, yet even the satire site wouldn’t post an article entitled, “Should 11-year-old girls have to bear their rapists’ babies? Ohio says yes.” Nope, that’s the Chicago Tribune.

On April 11, Republican governor Mike DeWine signed the state’s Human Rights Protection Act, which bans abortions as soon as doctors can detect a heartbeat—about six weeks. The fact that many women do not yet know they’re pregnant is irrelevant. Actually, that’s part of the point: Ignorance is embedded in the design of the legislation.

The law, set to go into effect in mid-July, is being trailed by another bill that bans “drugs or devices used to prevent the implantation of a fertilized ovum.” Even birth control is being taken off the shelves in Ohio.

The recently passed bill features one even more disdainful caveat: If a child is raped, she must still bear the baby—as the headline suggests. While mothers will not be imprisoned for having an abortion (as some erroneous headlines have suggested), there is plenty to grieve about.

Ohio is only one of four states currently enacting “heartbeat laws.” Georgia, Kentucky, and Mississippi now have similar laws on the books. Kentucky has yet another on tap, one which would prevent a woman from having an abortion upon learning that her child will be disabled.

Meanwhile, Missouri is foaming at the mouth for its shot while Alabama is about six months away from signing its own version. Louisiana’s bill flew through the state Senate, 31-5, and is heading to the House. North Dakota’s bill was signed but struck down in federal court. In total, 20 states have attempted or currently have heartbeat laws on the books or in progress. 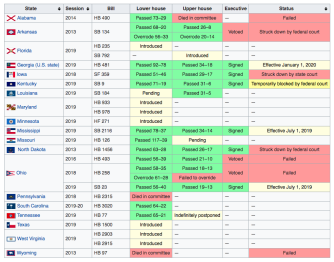 Last week, Georgia governor Brian Kemp signed his state’s heartbeat bill into law, cutting his state’s restrictions on abortions from 20 weeks to six. While this law won’t go into effect until January, it also does not allow for women that are impregnated due to rape, incest, or conditions that put the health of the mother on the line. In fact, if a woman has a miscarriage, she could be put under investigation to ensure that an abortion was not performed.

Kemp might soon be hurt in a way that certainly affects him, even if a woman’s suffering does not: His state’s wallet. Georgia’s film industry is booming thanks to a 30 percent tax rebate; it currently supports 92,000 jobs. Some Hollywood producers aren’t having it, however, threatening to take their projects elsewhere. While the producers of HBO’s “Lovecraft Country,” Jordan Peele and JJ Abrams, announced that they’re staying on set, they’re now donating profits from their show to two charities battling the state’s draconian laws.

It’s sad that money has to be the motivating factor for as basic a right as abortion in this country, but it might hold power—odd, given how financially conservative those supporting this bill seem to be. Anti-abortion activists generally don’t support government assistance to mothers that can’t afford children, yet do everything in their power to make sure they have the baby anyway. Even the mother’s life isn’t of concern, only the ambiguous baby, and only as a concept at that.

Jesse Ventura: Being Pro-Life Should Mean More than Being Pro-Birth

Jesse Ventura: Being Pro-Life should mean more than being Pro-Birth

These initiatives in Ohio and Georgia will be challenged in court, likely delaying the process of implementation, as happened in Kentucky when a federal judge blocked the law from going into effect in March. Kentucky only has one abortion clinic as it is, another clever move installed by activists intent on dismantling basic female rights.

These laws continue even as we know what results to expect. In February, an 11-year-old known as “Lucia” was forced to give birth after being raped by her grandmother’s 65-year-old boyfriend. She attempted to commit suicide twice after learning of her pregnancy. Though abortion is legal in cases of rape in Argentina, stalling tactics were employed. She was forced to have a Caesarean section in the 23rd week of her pregnancy. The baby did not survive. Lucia will have to live with this horrific incident for the rest of her life.

Pro-Choice and Anti-Abortion: Both Sides of the ‘Heartbeat’ Bill

Pro-Choice and Anti-Abortion: Both sides of the ‘Heartbeat’ Bill

Even more baffling about this entire situation is that religion is at its core. While the world’s religions are truly different—the “every one says the same thing” mentality is more intellectual laziness than inspired truth—a handful of universals exists across cultures: empathy, compassion, trust, devotion, charity.

Sure, the major scriptures were written during tribal times—even more so than today—with the in-group receiving benefits and heretics being destroyed. Extrapolate the gist of meaning for global societies and those messages are truly applicable to all. Love thy neighbor and all that. Reciprocity reigns supreme.

Which is why it’s shocking to see many of the professed religious in America acting in direct opposition to the commands of their faith. An 11-year-old girl raped by a senior citizen is not grounds for abortion? You’ll look this girl in the eyes and claim it’s part of God’s plan? How about the potential death of the mother not holding as much weight as a fetus? These are, as many of the politicians behind these laws express, moral issues. The problem is they’re on the wrong side of being moral.

Charity means helping even if you don’t agree with the other person. Asking a homeless person why they ended up where they are is not compassion, unless you’re committed to helping them change their circumstances. Giving them a few dollars is. Charity isn’t charity if it’s only serving to make you feel better about yourself.

The anti-abortion fervor spreading across nearly half of America is a disease. It has nothing to do with faith or devotion. It’s a power grab and tool of manipulation. The more we attach the word “religion” to it, the more disservice we do to those religious who are truly compassionate and charitable. And we certainly need as much of those qualities as possible right now.

Tags
activismchoicechristianitymoralityprotestsreligion
In this article
activismchoicechristianitymoralityprotestsreligion
Related
Starts With A Bang
Science won’t ever make philosophy or religion obsolete
The information we have in the Universe is finite and limited, but our curiosity and wonder is forever insatiable. And always will be.
Thinking
Trimurti: Meet the “Holy Trinity” of Hinduism
Hinduism emphasizes the journey, whichever path that takes. And it holds us responsible for our own self-improvement.
Culture & Religion
3 reasons “you” won’t return after this life
The idea that “you” persist after death does not hold up to the current understanding of memory and identity.
The Past
No, Christmas is not a stolen pagan festival. There are 3 problems with that argument
“The Da Vinci Code” popularized the idea that Christians stole much of their theology. It’s wrong, especially regarding Christmas.
Neuropsych
Psychedelics alter users’ beliefs about God, reality, and superstition
Belief in God and the afterlife increased, while belief in superstition decreased.
Up Next
The Present
Is Juche the state religion of North Korea?
Is Juche an ideology, a scam, or a very strange religion?