We’ve talked before about Juche, the ideology that may, or may not, guide the actions of North Korea. Based around the idea of creating a self-reliant, fully independent, powerful North Korean nation, Juche was supposedly created almost entirely by the Kim family and continues to justify its rule over the people.

One aspect of North Korean life that often shocks outside observers is the fanatic devotion that the people there still seem to have to their country and its leaders despite the conditions they endure as a result of those leaders. This has inspired many to wonder if Juche is more than just an ideology but an entire religion by, of, and for the North Korean state.

The religious elements of Juche

More than a few scholars have pointed out that Juche has more than a few religious parts to it. It includes a national savior with superhuman traits in the nation’s long-dead founder Kim Il-sung, an elaborate series of rituals, the promise of immortality through the eternal continuation of the social system you are a part of, an ordained class of officials who carry out the orders of the divine, and a large group of people who seem fanatically dedicated to its teachings.

It is also infallible, or so it tells us.

The regime has also ritualized several aspects of its rule in ways not dissimilar to how major religions create ritual themselves. Major festivals such as the Arirang Mass Gameshave been compared to religious events filled with symbolism glorifying the regime, complete with elaborate dance numbers, gargantuan images of Kim Il-sung depicted as a savior, and ham-fisted metaphors describing the Korean people as the children of the eternally caring leader.

You can understand why anthropologist Jung Hyang Jin dubbed the festival “The High Mass of Juche.”

How to build an authoritarian regime — and how to stop one

Where does it get these ideas from? They seem unusual for a political ideology.

While some of these ideas are clearly intended to create a cult of personality around the leaders, the religious influences are apparent to students of Eastern thought.

Dr. Alzo David-West points to several studies that explain how Juche shares many key elements with Confucianism, including its “structures of authority, bureaucracy, hierarchy, familism, filial piety, man-centeredness, mentalism, moral education, patriarchy, and respect for elders.” It’s no wonder why historian Bruce Cummings referred to the ideology as “Neo-Confucianism in a communist bottle.”

Dr. David-West also argues that Kim Il-sung understood Confucius better than he grasped Marx or Hegel and that it would make sense for him to endorse an ideology that was essentially a repackaged version of what the population was already familiar with and turn its tenets and traditions toward the state. Historian Charles K. Armstrong deems this effort successful, as Juche even managed to steal filial piety, a core virtue of Confucianism, and redirect its use towards worship of the state and supreme leader.

Those leaders are also more than just the brains behind the revolution that will lead Korea to greatness. 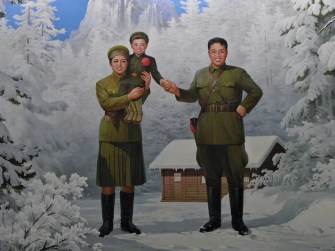 North Korea says Kim Jong-il was born on Mount Paektu, an important place in North Korean mythology, but there’s evidence to show he was born in Soviet Siberia.

The sacred tenets of Juche concerning the Great Leaders

Some of the things that the North Korean state tells people are a little out there but are held to be divine truths. These tend to relate to the greatness of the Kim family, whose rule is justified through Juche’s other tenets.

For starters, Kim Il-sung, the founder of the North Korean state, is revered as a nearly God-like being. Koreans are taught that he nearly single-handedly drove the Japanese out of Korea during World War Two, and come up with all manner of great ideas for rebuilding the country all by himself. The Georgian calendar was replaced with the Juche era system, which begins on the date of his birth. The cult of his personality is all-pervasive, and he is regarded as the “Eternal President” whose powers are executed through the living.

His son Kim Jong-il is often reported to have invented the hamburger. No, seriously. It is said his birth took place on a sacred mountain accompanied by a double rainbow and the swooping of majestic birds. Perhaps most impressively, he once nailed 11 holes-in-one in a single game of golf. His 17 bodyguards all confirmed it. This would make him one of the greatest golfers of all time.

The current leader, Kim Jong-un has had less time to build up a personality cult. He does enjoy several large signs and monuments dedicated to him and is referred to as a military genius even though he never served. It is said he is able to control the weather. His authority remains absolute and has been codified in law. The veneration of all three Kims, both in life and in death, has been compared to the treatment of imperial Japanese emperors who were regarded as divine beings.

Religion is such a strong word. Is it the right one for a political system?

Many observers are willing to use the word ‘religion’ to describe Juche. Eun Hee Shin, a South Korean author, has made the best case for this. He famously dubbed the ideology an “indigenous national religion.”

While affirming that Juche began as a political philosophy in the 1950s, he points out that by the 1990s it had taken on a distinctly religious tone. In addition to the full implementation of a doctrine, formalized ritual, and priesthood that make it appear somewhat similar to any major organized religion, Shin explains that the worship of Kim Il-sung took on religious elements as a result of the expansion of his personality cult:

“[North Koreans] believe in him as ‘Father’ in the sense of being the national provider, healer, and even savior.”

His ideas are backed up by interviews with North Korean refugees. One of them explained their faith in the leader as such:

“[Kim Il-sung] is the one, the only one who saved our nation. He is just the same as God that I now believe in. Without God, I cannot exist. Even if I have become a Christian, my faith in God is not yet as strong as my love for him…’ Why do we love him?’ Your question does not really make sense to me…He is the only one we know of.”

Others disagree with this interpretation and argue instead that it is a political program with religious elements. They say that while it is true that Juche has more than a few spiritual aspects to it, this is nothing fantastically different than what dictators have done since forever. A rather intense personality cult does not, they claim, a religion make.

Regimes and ideologies of both the left and right, and North Korea shows traits of both, have done things like this before. Bertrand Russell, British philosopher and socialist critic of the USSR, once argued that Marxism could be understood as a religion and often referred to “Bolshevism” as akin to Christianity, Buddhism, and Islam. He didn’t mean that it was a religion in the standard, theological meaning of the word, instead that it comprised a total system for understanding life, the universe, and everything.

If we take this looser definition, then Juche does at least have religious elements and could be fully understood as a religion.

This is neat and all, but do people buy this? You’d have to be half crazy to buy this stuff!

That is a matter of some debate.

On the one hand, it seems evident that some people are fanatically dedicated to the Kim family. In this clip below you can see the reaction of elderly North Koreans to finding out their cataract surgeries (provided by foreigners) were successful is universally to praise and thank the Kim family for giving them their eyesight back.

The highest-ranking defector from the North, Hwang Jang-yop, told the world that the concept of the “Great Leader” completely rules North Korean life and that many people do believe that the Kim family is all they say they are. Christopher Hitchens, who visited North Korea and wrote on it several times, also agreed that a large number of people were sincere in their devotion to the ideology.

Conversely, many observers report getting the idea that people don’t think the Kim family is semi-divine or that North Korea is all that great, but go along with the program to stay out of the gulag. Even the creepy clip above with the newly cataract-free seniors can be viewed as overly dramatic signaling. After all, would you like to be the one person in the room who didn’t thank the Great Leader for your newly restored eyesight?

Stuff like this isn’t all that unusual in totalitarian or authoritarian societies. Members of the communist party in the USSR famously feared being the first person to stop clapping after Stalin spoke. When Papa Doc in Haiti presented himself as a Voodoo priest and hinted at a supernatural origin most people were smart enough to not openly disagree.

It didn’t really matter if people thought Stalin made a great speech or if Papa Doc was a supernatural being. What mattered was staying safe and protecting the people you love, sometimes that called for pretending to believe absurdities.

If Juche counts as a religion or not remains to be determined. The ritualization of many of its elements harkens back to Confucianism, and its cult of personality elevates the Kim family to the level of demi-gods worthy of religious reverence. While it is impossible to know precisely how sincere most North Koreans are in their claims to believing in this, that may not be the important thing.

Dark matter, dark energy, inflation and the Big Bang are real, and the alternatives all fail spectacularly.If you keep up with the latest science news, you’re probably familiar with a […]