The First Thanksgiving: Reclaiming Jamestown From the Dustbin of History

There are a number of issues at stake in the way Americans choose to think of their heritage and celebrate their creation story on Thanksgiving. After all, creation stories serve as a guide for how we function as a society today. 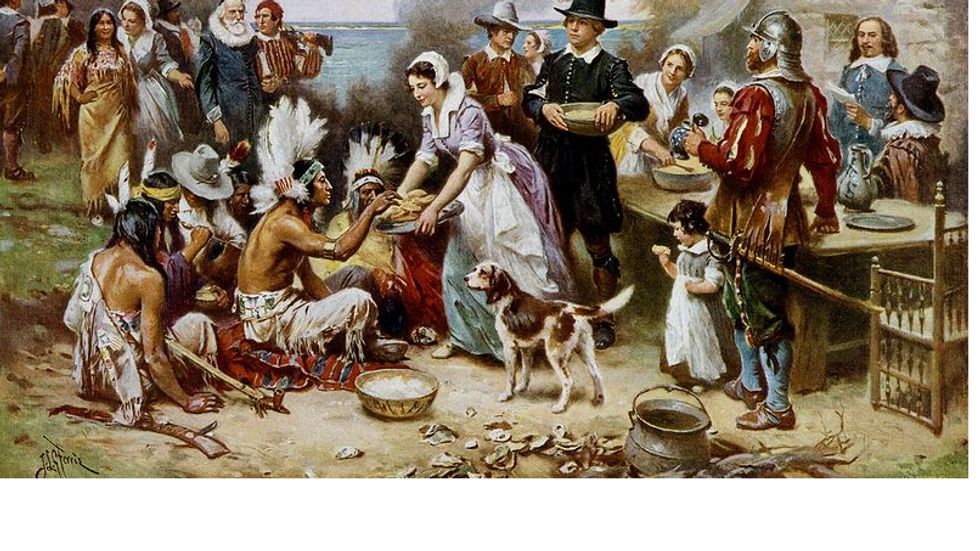 Imagine what the Macy's Thanksgiving Day Parade would look like if Americans celebrated the Jamestown settlement, and not a highly romanticized version of Plymouth, as our shared creation story. Instead of friendly Pilgrims and Indians on floats next to Mickey Mouse and Tom Turkey, we'd witness what one historian describes as a procession of emaciated subsisters and cannibals, "their bodies shrunk down almost to the skeleton, resembling corpses held upright by unseen marionette strings."

The portrait of it that has come down to us depicts greedy, grasping colonists in America and their arrogant backers in England...Within Jamestown, life degenerated into death and despair. When John Rolfe finally developed a marketable crop--tobacco--the colonists exploited the land and one another in the scramble for profits. Ultimately they would institute slavery for imported Africans in their insatiable search for profits. This is the creation story from hell.

Indeed, the Jamestown settlers suffered enormously, and died in great numbers. During the "Starving Time" of 1609-1610 the colonists were subsisting on starch from their shirt collars and “the meat of their dead fellows.” Only 60 of the original 500 colonists survived this period, which remains one of the most controversial events in American history.

Why did Jamestown fail? The answer to that question depends on your political persuasion. In fact, Tea Party activists have found in Jamestown an analogy for the evils of socialism. It was the settlers' practice of collectivism, this argument goes, that led to their destruction.

Many historians say this argument is simplistic, and does not survive the most rudimentary historical scrutiny. In fact, the Jamestown colony was sponsored by the Virginia Company of London, whose stockholders financed the venture with the hope of turning a profit on New World gold. And so a competing narrative is that the colonists' hunger for gold was so insatiable that the profit motive blinded them from their responsibilities to the community.

The location of Jamestown was selected because it was particularly well-suited for defense against Spanish attack, but it was also a malarial swamp that was ill-suited for agriculture. Had the site been located elsewhere the colonists might have feasted on Chesapeake Bay crab, and the first Thanksgiving could have occurred some years earlier than it did.

Still another explanation for the plight of the Jamestown settlers looms large. Colonization is really hard. In fact, there were numerous failed settlements up and down the East Coast. So why was failure so common?

As Karen Kupperman writes, the migrants had been sent over with "notoriously unrealizable goals: to find a good source of wealth, preferably precious metals, or a passage to the Pacific and the riches of Asia." When the colonists failed to deliver the rich products their investors demanded, the leaders of Jamestown failed to recognize, and voice, a simple truth. As Kupperman writes, "getting started is extremely difficult, and they would need support for many years just to become established before any valuable products could be expected."

The Virginia Company of London, for its part, was guilty of short-termism. As Karen Kupperman points out, 17th century investors eyed the next quarterly report as much as those in the 21st. While the settlers pleaded for help, the company viewed the colony as a drain on its resources, and sent the lion's share of its supply ships to Asia and the Mediterranean. And so we hear of numerous recriminations today, aimed at all sides. One notorious and oft-quoted example is the elite members of the Jamestown settlers referring to the ordinary settlers as "the scum of the earth."

And yet, Kupperman notes that if we read beyond "the surface noise of complaint and charge and countercharge," we see that ordinary people in Jamestown "were improvising relationships with the people and the land that finally achieved a measure of stability and growth in the colony."

There are a number of issues at stake in the way Americans choose to think of their heritage and celebrate their creation story on Thanksgiving. After all, creation stories serve as a guide for how we function as a society today. What lessons can the struggles of our forefathers teach us as we confront an uncertain future in the 21st century? To answer that question, it helps to get the history right.

As Karen Kupperman points out in The Jamestown Project, the dual images that exist in the popular imagination for both the Plymouth and Jamestown settlements represent a false dichotomy. While the Pilgrims at Plymouth are portrayed as a humble people and the Jamestown settlers a motley rabble, this distinction would have been completely unintelligible to contemporaries.

In fact, if we are to reconstruct Jamestown in its proper context, as Kupperman does an admirable job of, we would see that this settlement was not a failure at all. In fact, Kupperman writes, through trial and error, "Jamestown's ordinary settlers and their backers in England figured out what it would take to make an English colony work." In a very short period of time they were able to accomplish "a breakthrough that none of the other contemporaneous ventures was able to make."

So the question is not what caused the many setbacks in Jamestown, but rather, what were the ingredients for its success? Kupperman lists them: "widespread ownership of land, control of taxation for public obligations through a representative assembly, the institution of a normal society through the inclusion of women, and development of a product that could be marketed profitably to sustain the economy." Indeed, Kupperman argues, not only did the colonists in Jamestown survive, they forged a model for all successful English colonies to come.

And so as the human race looks to new frontiers--such as expanding into space--what lessons can we bring with us in a capsule? The colonization of the New World in the 17th century would be a particularly good case study to take with us. After all, nothing has fundamentally changed about human nature, and at the same time, a lot has changed about our capacity for learning from success and failure.

Just as the pilgrims of 400 years ago, it looks like the interplanetary pilgrims of tomorrow will be funded by private industry, not governments. And these explorers may very well be inspired by religion or politics to take their journey. Some entrepreneurs may seek to colonize a planet where people can put, for instance, a libertarian political philosophy into practice. They might succeed, and they might be vaporized. Based on the lessons of history, their success or failure will have practically nothing to do with their political philosophy, and everything to do with the siting of their colony, as well as how well they are able to set a rational set of expectations for what these explorers can hope to accomplish in the next brave new world. Remember, it won't be easy.