Slavoj Žižek: Events and Encounters Explain Our Fear of Falling in Love

The renowned philosopher takes us through the events of his new book, Event: A Philosophical Journey Through a Concept. He explains how an event retroactively creates its own causes and why these elements explain our fear of falling in love. 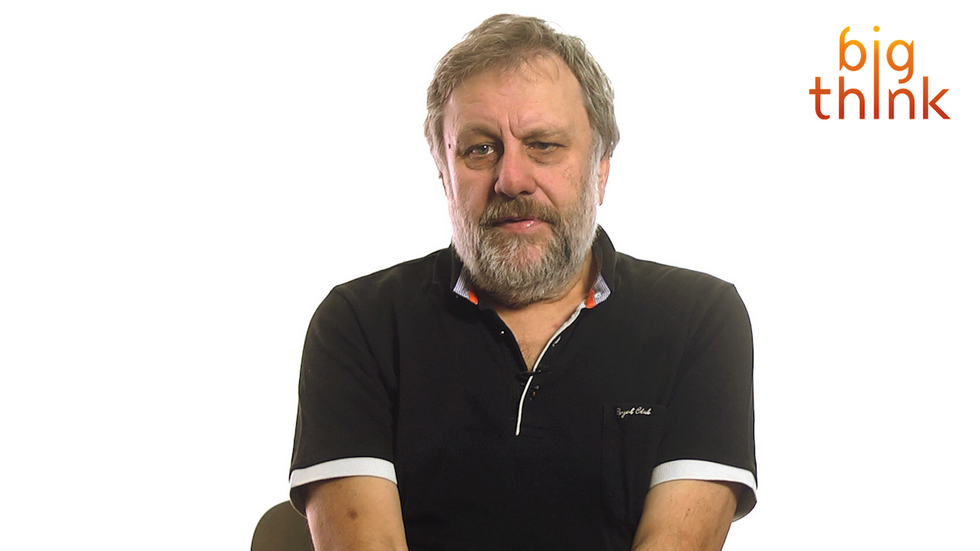 Renowned philosopher and social critic Slavoj Žižek returns to Big Think to talk events and encounters, the subject of his newest book, Event: A Philosophical Journey Through a Concept. In the following clip from his recent Big Think interview, Žižek takes us through the nature of an events, the ways in which they retroactively creates their own causes, and how a thorough study of the phenomena can reveal truths about society as a whole. Žižek tackles two main subjects in the clip. First, he offers a basic theoretical definition of "event" while providing a few less abstract examples to explain his point. Second, he applies this understanding of an event's nature while exploring contemporary attitudes toward falling in love.

Finding an exact definition of "event" is difficult because there are so many components associated with the concept. Žižek settles on an elementary explanation:

"In my book I focus on event in the sense of something extraordinary takes place... Within a certain field of phenomena where things go on the normal flow of things, from time to time something happens which as it were retroactively changes the rules of what is possible in the sense that something happens. It is generated by that situation."

All right, so perhaps that's not exactly "elementary." Žižek employs an example from literature to explain the concept of causes being retroactively created by an event:

"We can say that Kafka implicitly or explicitly relied on a whole series of other artists like Edgar Allan Poe, Dostoevsky, William Blake and so on. But it’s not as simple as that because when you try to isolate in those earlier orders what makes them predecessors of Kafka, you can see that that dimension, Kafka, before Kafka, is perceptive and only once Kafka is already here."

In this example, Kafka is the event. The other authors named couldn't have been called influencers of Kafka until Kafka himself had emerged.

"Or as [Jorge Luis] Borges the Argentinian writer, as he put it in a wonderful concise way, truly all authors, writers have predecessors. A truly great writer in a way creates his own past, his own predecessors so that yes, there are people who influenced him but you can see this influence only once he is here."

We're delving into some very theoretical material here. This isn't tremendously dissimilar to the concept of Schrodinger's cat -- whether or not the cat is alive can only be determined after opening the lid of the box. What Žižek is saying is that whether or not Edgar Allan Poe was a mile marker on the way to Kafka can only be determined once Kafka emerges. The San Francisco Giants getting into the playoffs were only a contributing factor to their World Series win after they won the World Series.

So what do events have to do with love? Žižek switches gears and explains how love is an encounter, which is why English-speakers, as well as others, say they "fall" in love. The example he uses is of a regular person living their life only to have a chance encounter with the love of their life.

"A totally contingent encounter but the result can be that your whole life changes. Nothing is the same as they say. You even spontaneously perceive your entire past life as leading towards this unique moment, you know, the illusion of love is 'oh my God, I was waiting all my life for you.'"

Žižek laments that these encounters are becoming rarer in the age of internet dating. In a way, we're going back to the era of matchmakers and arranged marriages. Except instead of your father choosing who you love, it's algorithms and dating agencies and whatnot.

"What they offer us is precisely love without the fall, without falling in love, without this totally unpredictable dramatic encounter. And that’s what I find very sad. I think that today we are simply more and more afraid of this event or encounters. You encounter something which is totally contingent but the result of it if you accept it as an event is that your entire life changes."