CES 2015: The Internet of Things is Here, and It May Even Be Useful

Forget the drones, 4K TVs and virtual reality headsets. This year's Consumer Electronics Show was dominated by devices and services that connect your world. 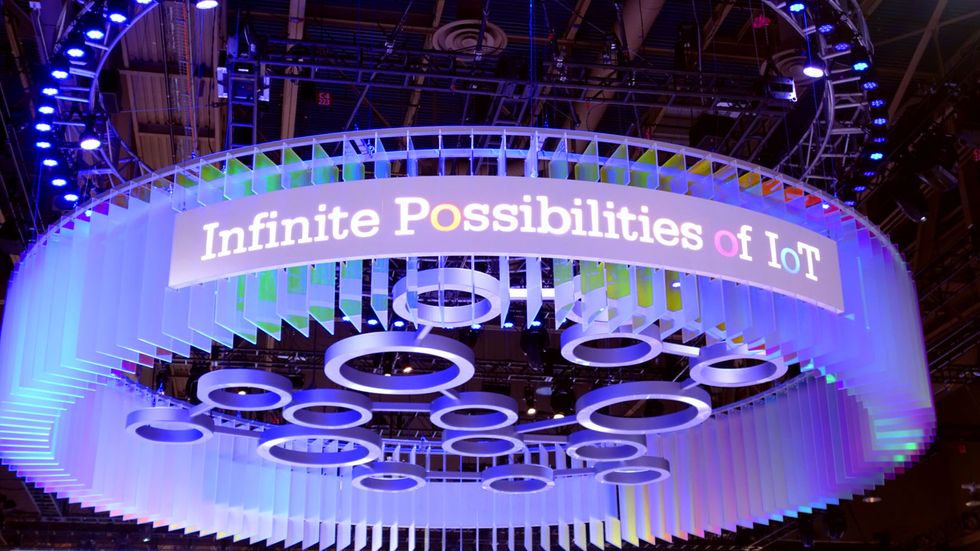 At last year's Consumer Electronics Show, the talk was about the "Internet of Things," in which every device is a smart device and they all communicate with you via the internet and your smartphone. And a few gadgets, such as an internet-connected Crock-Pot, attempted to deliver on that promise. This year, however, the Internet of Things (or the "Internet of Everything," depending on who you spoke to), was everywhere, with everything from smart ceiling fans to connected flower pots on display. And some of them actually went beyond the obvious gimmicks and were products you might actually want to own.

Shawn DuBravac, chief economist of the Consumer Electronics Association and author of "Digital Destiny," kicked things off with a pre-CES presentation highlighting the trends that he believes will shape our world over the next year and beyond.

For DuBravac, the future will be determined by what he calls the "5 Pillars of our Digital Destiny," which include ubiquitous computing, cheap digital storage, constant connectivity, proliferation of digital devices and the "sensorization" of technology. Those pillars have helped create the smartphone market, which is now bigger than the market for personal computers. But DuBravac sees it spawning an even bigger universe of products that serve what he calls the "Internet of Me," consisting of everything from internet-connected thermostats to smart toothbrushes. Within a few years, he says, the market for such products will reach 50 billion devices, compared to the current smartphone market of 2 billion units.

DuBravac sees a world in which communication among products and services becomes ubiquitous and beneficial, as tools like internet-connected toothbrushes automatically relay information to dentists. "It could mean that every dentist becomes a data scientist," he says. And sensors and connectivity can bring new life to old devices. One new product highlighted by Dubravac was the Roost, a normal-looking 9-volt battery that, when added to any smoke detector, turns it into an internet-connected device that can alert you anywhere when it senses smoke -- or when the battery is about to go dead.

The Internet of Things (or Everything or Me) so dominated CES that Samsung, which introduced a series of innovative TVs, appliances and more at its main press conference, devoted a second event to a rambling speech by CEO B.K. Yoon about IoT, where he pledged $100 million in investments in IoT-related companies. "The Internet of Things is absolutely amazing," Yoon said, while introducing devices such as a sleep monitor that could determine the best time to wake you in the morning based on your sleeping patterns, and relay that data to your smart lighting system or connected alarm app.

If you think IoT is a lot of hot air, CES still had plenty to offer, including one product quite literally based on hot air. Toyota was joined by futurist (and Big Think expert) Michio Kaku to show off the Mirai hydrogen-powered car. As previously announced, the fuel-cell vehicle will be available later this year in limited quantities. Kaku said we're about to enter a new age of hydrogen, "a non-polluting society, that's going to perhaps one day vanquish global warming." To get there, of course, we'll need not just more hydrogen-powered vehicles, but an efficient, ubiquitous fueling network. That's why Toyota's other announcement, that it's granting royalty-free access to its collection of 5,680 hydrogen-related patents, may have been more important than any news about the car itself. Kaku's "hydrogen society" may not be around the corner -- Toyota only expects to sell about 700 Mirais this year -- but the patent release could spur other companies to follow suit and develop more hydrogen-powered vehicles and the network required to keep them running.

CES also featured plenty of more "traditional" gadgets, including stunning ultra high-definition TVs from the likes of Sony, LG and Samsung; tablets, PCs and smartphones from companies large and small; and audio products ranging from Crosley's retro turntables to LG's total-home speaker system. Trying to differentiate themselves from the streaming audio pack, both Sony and rocker Neil Young's Pono Music showed off high-resolution portable audio players, with Sony's new Walkman ZX2 going for $1,200, while Young's Pono Player sells for a more modest $400. Young boasted that his player -- which raised over $6 million in a Kickstarter campaign last year --  is "the same as an iPod, except that it sounds like God."

Still, even with the audio and video products, the self-driving cars, the drones, the 3D printers, and the virtual-reality headsets, CES 2015 will inevitably be remembered for the devices and technology that connect everything to everything else, whether they're smart watches, fitness trackers, smoke detectors, smart vents or tea kettles. This, according to DuBravac, is one reason you may not see a single hot product that dominates CES the way certain devices did in the past. While smartphones and HDTVs are mass-market products, connected-home gadgets serve much smaller groups. DuBravac calls this "fragmented innovation," and says it will lead to more widespread adoption of new technologies in products targeting narrower groups of consumers. "There is a greater array of innovation," he says.

However, the bigger question may be, do we really need internet-connected tennis rackets, baby bottles or batteries? That's really up to the marketplace, which is why, as always, plenty of the products shown at CES this year may never turn up on Amazon or in your local Best Buy. DuBravac points out that, just because something can be digitized and shared, doesn't necessarily mean it should be. "We have for a long time come to CES to see what's technologically possible, what's technologically feasible." he says. "But we’re now shifting and the focus is on what is technologically meaningful. Should we digitize it? How should we use it?"