Bill Nye has made national news with his statements on creationism versus evolution on Big Think. The big idea behind it: if you reject science, you won't succeed, and we as a society won't succeed to the fullest extent. 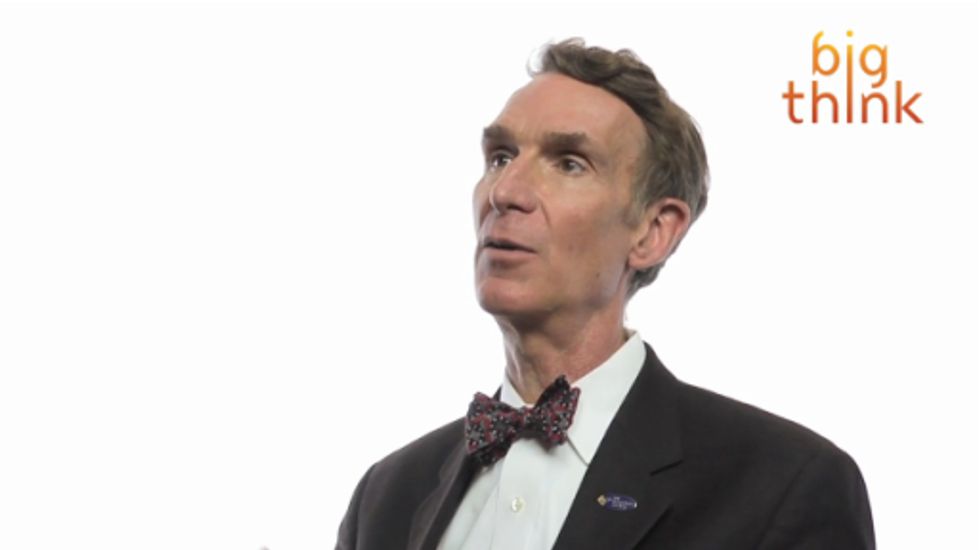 The biggest development is not a development at all. Bill Nye, aka, "The Science Guy" is not dead, as was widely reported this weekend on Twitter. In fact, a Big Think video titled "Creationism Is Not Appropriate for Children" has made news by having, as of this writing, over 1.7 million views [Update: 4.9 million views] and thousands of comments and Facebook likes. The video, which was posted on Big Think in March but was only recently posted to our Youtube channel recently, has garnered a great deal of media attention, including from CNN, ABC, Slate, The Christian Science Monitor and more.

It is unclear exactly where the rumors of the popular children's science educator's death started, but it seems likely that they began with this article from The Onion, which fictitiously reported that Nye was killed in an accident when trying to fill a hot air balloon by mixing baking soda and vinegar (which, by the way, produces heavier-than-air carbon dioxide). Several news sources have also speculated that the rumor may have started as a backlash against Nye's perceived attack on religion. This has happened before, notably surrounding an instance in which Nye was booed and walked out on by the audience at a lecture in Waco, Texas for stating (I kid you not) that the moon reflects the light of the sun and produces no light of its own.

In the video, Nye says that while everybody is entitled to his/her own opinion, creationism is unequivocally wrong, and that people who still believe it -- or more importantly, insist it is taught to their children -- hold society back for everybody. Nye argues we need a scientifically literate and educated population.

In his words: "I say to the grownups, if you want to deny evolution and live in your world, in your world that's completely inconsistent with everything we observe in the universe, that's fine, but don't make your kids do it because we need them. We need scientifically literate voters and taxpayers for the future. We need people that can—we need engineers that can build stuff, solve problems."

Nye is making a point that is larger than creationism:

In past centuries, you could afford to live your life out just fine without believing in evolution. Today, we not only know more about science, we have an innovation economy that is based on science. As Nye points out, evolution is fundamental to our understanding of the known universe. So sure, everyone has a right to believe whatever they want. However, if you reject science, you won't succeed, and we as a society won't succeed to the fullest extent.

That's why Nye says that creationism is an idea that will vanish.

But there is still more at issue. The rejection of science has broad ramifications, and this idea -- one might call it "the war on science" -- applies to other matters on which Americans disagree. If there is a war on science, then Climate Change and the link between vaccinations and autism are surely some of its greatest battles.

What we have, then, is a pervasive and divisive issue that actually has absolute answers. No wonder the beloved edu-tainer thought it worth it to take the issue on, and no wonder the video has gathered the response that it has. After all, if you reject science, you are, in the words of the inimitable Science Guy, "just not going to get the right answer; your whole world is a mystery... instead of an exciting place."