These Numbers Tell the Story of Einstein's Gravitational Waves

LIGO is celebrating apparent confirmation of Albert Einstein's general theory of relativity, specifically that space and time are really one unit that exist as part of a gravitational grid. 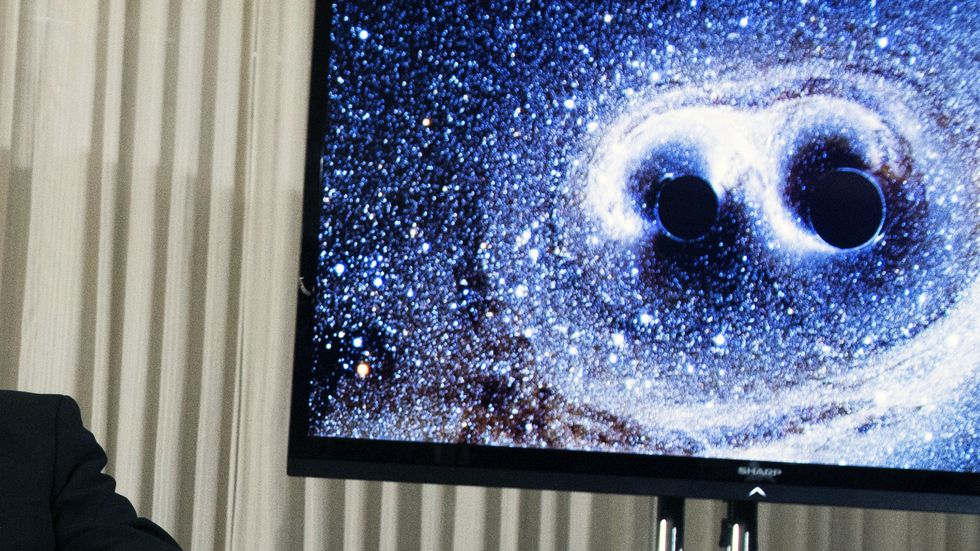 Scientists everywhere are celebrating the apparent confirmation of one aspect of Albert Einstein's general theory of relativity, specifically that space and time are really one unit — space-time — that exist as part of a gravitational grid. When that grid is disturbed by massive events in space, the space-time continuum itself is altered.

Seven milliseconds later, the signal was picked up at a similar observatory in Hanford, Washington.

A team of more than 1,000 scientists, collectively called LIGO, had struck physics gold.

Believed to be evidence of gravitational waves, the signal could confirm a final portion of Einstein’s 1915 general theory of relativity.

The Livingston signal was recorded by two antennas each measuring 2.5 miles long and joined at the bend of a large L-shape.

The antennas are held inside a concrete vacuum filled with 2.5 million gallons of empty space.

When Einstein announced his theory in 1915, he instantly overturned more than 200 years of stable Newtonian physics.

The facility where the antennas are located was built by the National Science Foundation for $1.1 billion over more than 40 years.

Scientific instruments converted the signal, coming in from outer space, to a sound that starts at a low frequency and builds to middle C.

More than 1 billion years ago, two black holes collided with one another.

Drawn inescapably toward each other — a result of gravity — their velocity sped to nearly the speed of light.

At 250 times per second, they circled each other before coalescing into a single black hole, an event that took one-fifth of a second (Earth time).

When they collided, the black holes released 50 times the amount of energy released by all the stars in the known universe at that same moment.

This energy vibrated the Livingston instruments just four one-thousandths of a diameter of a proton.

Image credit: The machines that gave scientists their first-ever glimpse at gravitational waves are the most advanced detectors ever built for sensing tiny vibrations in the universe.The two US-based underground detectors are known as the Laser Interferometer Gravitational-wave Observatory, or LIGO for short. / AFP / SAUL LOEB /Getty Images