Dr. Michelle Thaller is an astronomer who studies binary stars and the life cycles of stars. She is Assistant Director of Science Communication at NASA. She went to college at[…]
Go to Profile
In Partnership With
John Templeton Foundation 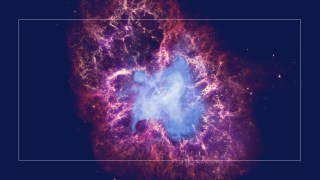 Thanks to time-traveling telescopes, we can see more about the Big Bang.
▸
with
Michelle Thaller

MICHELLE THALLER: I know every scientist understands that we cannot see the

entire universe right now. And that's because there's such a thing that we quantify as the observable universe. The universe has existed, we think, since the Big Bang, about, say, 13.8 billion years. So as you look farther and farther out into space, you necessarily have to look back in time. If something is a million light years away from you, like the Andromeda galaxy is about two million light years away, the light that you see through binoculars tonight, as you look up at the Andromeda galaxy left two million years ago.

We now have instruments that see so far, we can actually look back to about 400,000 years after the Big Bang. We can see so far out into space that the light has taken that long to get to us. The whole idea of the Big Bang has been given I think a real disservice. There are so many misconceptions, and certainly, one of the biggest misconceptions is that people think that scientists feel that the Big Bang came out of nothing. I mean, how did all of this energy and all of this matter that made up the universe, you're saying it just came out of nothing.

No, I don't think any scientist actually believes that. The problem is when you think about the condition the universe was in at that point, I mean, take our observable universe, right? I mean, you can look from one side of the universe to the other, you'll back 13.5 billion light years or more. All of the stuff that we see was actually compressed into a space smaller than an atom, volume smaller than an atom. We don't have the physics that describes how that would work.

That is so much mass, so much energy and so little volume, at this point, there wasn't even mass, just basically pure energy, that right now, our physics doesn't go there. As we get a better idea about how gravity works under very extreme circumstances, huge energy densities, we may have some idea what set off the Big Bang, and possibly what came before the Big Bang.

So today we actually have telescopes that are so powerful, they can see back to a time about 400,000 years after the Big Bang. That's amazing, we can see so far away in space that the light has taken that long to get to us, nearly 13.8 billion years. And when we look back to that time, the universe looks very different. For one thing, it's very hot. (chuckles) It's actually about as hot as the surface of the sun. And it's so dense and hot that we actually can't see any farther.

Literally, in any direction you look around the sky, anywhere you look, if you look to that distance, you see the universe as it was at that time, 400,000 years after the Big Bang, and everything becomes just hot hydrogen gas. That's incredible. But what that means is that there's a limit. There's a bubble around us that we can see just because there's been time for light to come to us from those areas. Think about my arm being the universe before the Big Bang, in some kind of state that we can't even describe through modern physics. The entire observable