Skip to content
Who's in the Video
Stephen Johnson
Stephen Johnson is the Associate Editor of Big Think. A long-time contributor to Big Think, he is a St. Louis-based writer and editor whose work has been featured in U.S.[…]
Go to Profile
The Present
Kanye shares big ideas with Trump at White House
West delivered an impassioned speech on American industry and transport, even pitching a high-tech plane to Apple.
▸
with
Stephen Johnson

Kanye West met with President Donald Trump on Thursday for a meeting meant to cover topics surrounding urban revitalization, but West ended up delivering a freestyle rant on everything from North Korea to Superman.

Sporting his red ‘Make America Great Again’ hat and joined by reporters, Ivanka Trump, Jared Kushner and Hall of Fame running back Jim Brown, West delivered an impassioned and disjointed soliloquy on topics including North Korea, ending stop-and-frisk policies, prison reform, keeping jobs in the U.S., and how wearing a MAGA hat made the rapper feel “like superman.” 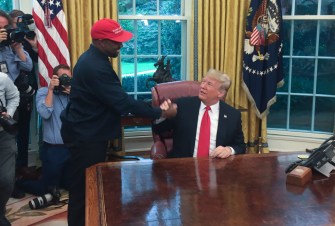 A wild meeting in the Oval Office

“There was something about putting this hat on that made me feel like Superman,” said West, who recently made headlines for delivering a similarly excited speech during a segment of Saturday Night Live that ultimately wasn’t aired. “You made a Superman – that’s my favorite superhero – you made a Superman cape for me.”

The White House said West’s meeting with the president, which also included a luncheon, was focused on topics like urban revitalization, workforce training, African-American unemployment and crime in Chicago. During the press briefing, West denied rumors that he’s considering a 2020 presidential run, suggesting he’d only consider it after Trump’s tenure.

“Let’s stop worrying about the future, all we have is today,” West said. “Trump is on his hero’s journey right now. He might not have thought he’d have a crazy mother-f***r like me (supporting him).”

West has long drawn criticism from his fans and fellow artists for supporting Trump, an admiration that seems to stem partly from Trump’s communication style, as West told a concert crowd in 2016:

“There’s nonpolitical methods to speaking that I like, that I feel were very futuristic. And that style, and that method of communication, has proven that it can beat a politically correct way of communication.”

In May, West caused some outrage when suggested “400 years” of African American slavery seemed like “a choice.” He later apologized. Meanwhile, Trump has remained grateful for West’s support.

“He can speak for me any time he wants, he’s a smart cookie,” said Trump, who seemed at times speechless between West’s stream-of-consciousness remarks. “He gets it.”

Up Next
The teenage brain: Why some years are (a lot) crazier than others
▸
4 min
—
with
Robert M Sapolsky
Related
Putin’s war: “The single biggest geopolitical mistake since 1989”
“This is much deeper than just ‘let’s figure out how we can get both sides to get along.’”
▸
15 min
—
with
Ian Bremmer
How resisting conformity can lead to real world progress
Thinking as a group and going along with the loudest voices can feel easy and even natural. But to make real positive change in our world, it’s important to hear all voices and question the perceived majority.
▸
5 min
—
with
Todd Rose
10% of people are dominating social media. What if the other 90% spoke up?
Social media isn’t the majority – it’s the vocal fringe.
▸
with
Todd Rose
The Big Think Interview
Why the world needs cults
Scientology, QAnon, and Heaven’s Gate: why do we seek healing from cults?
▸
with
Jamie Wheal
The Present
Not just COVID: mortality rates are up from homicides, drug overdoses, accidents
Some of these trends may be due, in part, to the lockdown.