Though the last Democratic debate did not yield any revelations, the aftermath has been a focus on America’s financial state, with discussions of a wealth tax (championed by Sen. Elizabeth Warren and Sen. Bernie Sanders) and universal basic income (championed by Andrew Yang) receiving the lion’s share of attention.

Cue a handful of CEOs writing op-eds claiming that a wealth tax would never work.

Yet, we all know something is amiss. Pretending that billionaire tax cuts is the best path ahead for society is farcical. Between 1982 and 2018, the amount of U.S. wealth held by the richest 400 Americans grew by roughly $3 trillion. It’s data provided by University of California, Berkeley, economists Emmanuel Saez and Gabriel Zucman — both of whom also vetted Warren’s and Sanders’s wealth tax plans.

In a paper published in September, the two economists revealed another facet of American tax reality that has since made headlines everywhere: for the first time in history, American billionaires pay a lower tax rate than the middle class. A large part of the problem is that while the lower classes are bombarded with sales and payroll taxes, the wealthiest pay no tax on the money they hold in bank accounts and investment funds.

For example, Warren Buffet famously repeats that he should be taxed more. As Zucman points out, Forbes estimates Buffet to be worth $60 billion. Yet he only claims $10 million in capital gains to the IRS. Buffet might claim to want more taxation, but according to Zucman his tax rate is functionally zero.

Meanwhile, the Trump reelection campaign has raised over $300 million for the next election.

Cutting taxes is not the work of Trump alone, though he is certainly enabling the process. Obama slashed corporate taxes, as did Bush before him. As Saez and Zucman write in the Times piece, this is not the way things must be, but a concerted effort to keep wealth concentrated:

“Tax avoidance, international tax competition and the race to the bottom that rage today are not laws of nature. They are policy choices, decisions we’ve collectively made — perhaps not consciously or explicitly, certainly not choices that were debated transparently and democratically — but choices nonetheless. And other, better choices are possible.” 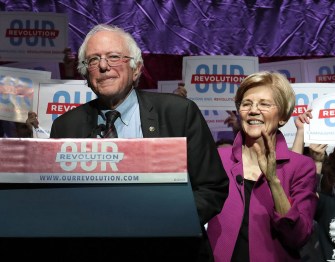 U.S. Senator Bernie Sanders is introduced by U.S. Senator Elizabeth Warren during a rally at the Orpheum Theatre in Boston on Mar. 31, 2017.

In America, the average family income is $61,732. While not a luxurious life, families at that income bracket get by — often with debt and, sadly, losing more of the societal benefits once afforded to the middle class. Billionaires would still be able to live extraordinary lives with a higher tax percentage, lifestyles that few in this nation will ever attain. The only group that would argue the fact would be billionaires (and those enabling them for their own small slice).

Getting there will be another story. While Sanders is keen on arguing for the Northern European societies, Zucman has stated that Europe’s wealth taxes are irrelevant to the United States: it is easy to move around the European continent to find more favorable tax laws, while those nations set the tax wealth bar too low, sometimes as low as $1 million.

Warren’s plan doesn’t kick in until $50 million while Sanders’s starts at $32 million. They both actually fall on 2 percent at $50 million, Sanders just begins his a bit sooner with a 1 percent wealth tax. As Saez and Zucman argue, globalization is no excuse: nations can hold corporations — and therefore, the CEOs of those companies — accountable for the percentage of earned income in their country.

If Apple or Nestle earn 20 percent of their profits in the United States, they can be held accountable for paying a higher rate on that fifth of their yearly revenue. The same can be applied to assets of the wealthiest, not only their claimed annual earnings or capital gains.

Regardless of precedent, Zucman pushes back on the notion that Americans only care about efficiency and not equality:

“These things change a lot, and it’s a very naive and historically wrong view. France used to be very unequal for a long time. It cares about equality, but the U.S. used to care even more and used to be even more equal than France.”

To care, we have to pick out signal from noise. In a response to criticisms that his plans go “too far,” in June, Zucman, along with Saez, responded, “They start from the premise that the rich cannot be taxed, to arrive at the conclusion that a tax on the rich would not collect much.” Specifics might be argued over for some time to come, but the notion that collecting more taxes from the 1 percent would not help society is pure noise.

Collectively, we need to tune into the signal that noise is hiding.

The questions about which massive structures to build, and where, are actually very hard to answer. Infrastructure is always about the future: It takes years to construct, and lasts for years beyond that.
The Present

Bitcoin’s creator owns five percent of the entire Bitcoin supply, meaning that he has a larger percent of Bitcoin than the U.S. has of gold.
Up Next
Health

Could this be the beginning of the end of insulin injections?