Concerned that scientific views are not being properly represented in Washington, a new nonprofit group wants to get more scientists elected. 314 Action, named after the first three digits of pi, wants scientists to embrace the political process, running for all levels of government. The group’s aim is to get as many scientists elected as possible in the 2018 elections.

314 Action sees particular urgency for its work due to the rise of anti-science rhetoric on the Hill, especially from the right. The current Republican standard bearer President Trump has questioned the idea that climate change is caused by humans and seemingly encouraged debunked anti-vaccination opinions. With the appointments Trump made so far, it’s hard to believe his administration will advance scientific causes.

The 314 Action group describes its members as people who come from the STEM community whose goals are to increase communication between STEM community and elected officials, to actually elect STEM-trained candidates to public office, to increase presence of STEM ideas through the media, and to prevent the U.S. from falling further and further behind the rest of the world in math and science education.

Another big issue for the nonprofit is to reorient public debate on gun violence by treating it as a public health crisis.

The organization hopes to achieve this by identifying interested scientists and connecting them with money and political campaign machinery. They have a current network of 75,000 donors.

“We have school boards that are determining the curriculum for our children and having people with a pro-science agenda at the table is very important,” she said. “We’re looking at the federal level, which is very important, but we’re also looking a few steps prior to that so we can build a pipeline to have more scientists at all levels of government,” told Shaughnessy Naughton, the board president of 314 Action, to Jason Koebler of Motherboard.

The group is not looking to “politicize science” but rather to get scientists into politics.

“When the man who’s going to lead this country claims climate change is a hoax, we need people willing to stand up for the facts,” added Shaughnessy.

Was is the profession most represented in our government now? Traditionally it has been lawyers, with more than half of all American Presidents and members of Congress having a law background. The proportion of lawyers in Congress decreased recently, to its lowest percentage of 36.5% in 2015-2016, still a sizable amount. What has increased is the number of professional politicians, people who rise up through the ranks from being aides or various political organizers.

The number of business people in government has held relatively steady at about 25% of the group.

Here’s a useful breakdown from a survey by Nick Robinson, a lecturer on law at Yale: 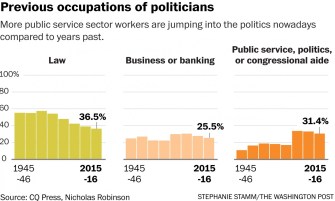 Why aren’t there many scientists involved in politics right now? The explanation offered by the New York Times in 2012 was that Americans just don’t trust scientists, dismissing them as “elitist”, a label that’s unlikely to go away with the dismal state of American science and math education. The fewer people understand what you do, the less likely they are to support you.

Another issue has been the nature of the political process itself. Unlike people in other professions, scientists usually have much less ability to take time off from their research to focus on public office work. In contrast to business people, lawyers and doctors (another well-represented group in Congress), scientists can’t easily come back to their field after years away.

As a result, there are just a few people with a science background working in the American government at this point. We are talking about people like representatives Bill Foster, Ph.D., an accomplished physicist, Jerry McNerney, holding a Ph.D. in mathematics, and microbiologistLouise Slaughter. There’re also a few people in Congress with a computer science degree. And that’s about it.

Isn’t it time science was properly represented in government?

Cover photo: Members of Congress observe a moment of silence during a September 11th remembrance ceremony on the steps of the U.S. Capitol September 11, 2013 in Washington, DC.(Photo by Win McNamee/Getty Images)

Tags
314 Actionanti-scienceanti-vaccinationanti-vaxxerclimate changecongressDonald Trumpeducationgovernmentgun violencepoliticssciencescientists
In this article
314 Actionanti-scienceanti-vaccinationanti-vaxxerclimate changecongressDonald Trumpeducationgovernmentgun violencepoliticssciencescientists
Related
The Future
How the metaverse will revolutionize K-12 and higher education
Imagine going on a tour through the human circulatory system as a tiny cell. That is just one example of education in the metaverse.
The Learning Curve
The art of asking the right questions
The right questions are those sparked from the joy of discovery.
Thinking
How the liberal arts can save higher education
Computerized, job-focused learning undercuts the true value of higher education. Liberal arts should be our model for the future.
Thinking
Boys are graded more harshly than girls. Why?
Education has a global bias against boys.
Neuropsych
Circadian rhythms: What time is your brain at its cognitive peak?
For college students, it’s the early afternoon.
Up Next
Surprising Science
Mosquitos Learn How to Avoid Bed Nets
As if antibiotic resistant bacteria weren’t enough of a worry, a recently published paper outlines a newly developed resistance mechanism in mosquitos as well.