You’ve likely heard it like this: for most of history, women foraged, secured water, and partook in minor agriculture while men went out to hunt. Even if this was the end of the story, women still provided an inordinate amount of calories for the tribe, as fruits, vegetables, and nuts accounted for the bulk of sustenance.

As with many myths, this longstanding story might not be completely accurate. Thanks to recent archaeological findings in Peru’s Andes Mountains, published in the journal Science Advances, up to half the women in mobile groups in the Americas were big-game hunters.

University of California, Davis archaeologist Randall Haas started shifting his view of ancient hunting practices in 2018 while leading his crew 13,000 feet above sea level in Wilamay Patxja. Upon uncovering the remains, he automatically assumed one body was male due to the proximity of weaponry.

The team unearthed a total of over 20,000 artifacts, including the remains of six bodies in five burial pits. One pit, which contained a teenage woman, included a toolkit with spearpoints and shafts. Tools for dissecting game were also discovered. In total, 24 stone tools were unearthed, including projectile points for killing large game, heavy rocks for stripping hides and cracking bones, and red ocher to preserve hides.

Previously, such tools were thought to be used for cutting or scraping when discovered near female remains. Haas says we need to rethink that approach, which is likely the result of modern bias. Buried near these pits were the remains of Andean deer and vicuña, two commonly hunted animals in Peru.

Haas’s group then reviewed the remains of 429 bodies spread over 107 sites in the Americas. These individuals lived between 6,000 and 12,500 years ago. Big-game hunting tools were buried with 11 women and 16 men. The Wilamay Patxja dig is not an outlier. 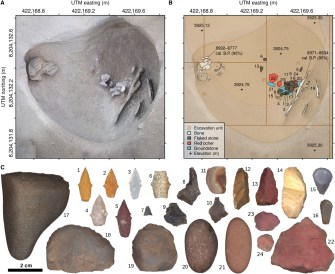 Why Female Gladiators Were Polarizing Figures in Ancient Romewww.youtube.com

Extrapolating from the most recent dataset, Haas estimates that between 30-50 percent of big-game hunters were women. This doesn’t imply that it’s a global phenomenon, although female warriors were recently identified in California, dating back roughly 5,000 years. Likewise, women warriors were discovered in Mongolia 1,500 years ago and in Scandinavia about a millennium ago.

Researchers say these findings challenge our understanding of gender identities. Modern analysis can discover the biological sex of these individuals, though we cannot make assumptions about the role of men and women by current standards. As University of Miami archaeologist, Pamela Geller says,

“With few exceptions, the researchers who study hunting and gathering groups—regardless of which continent they work on—presume that a sexual division of labor was universal and rigid. And because it is commonsensical, they then have a hard time explaining why female-bodied individuals also bear the skeletal markers of hunting or have hunting tool kits as grave goods.”

There’s always the possibility that hunting tools were ritualistically buried alongside varied members of the tribe, including women. Yet we also have to remember that there were no supermarkets on the savanna. Tribal life was an all-hands-on-deck affair. Female hunters should surprise us no more than stay-at-home dads today. Societies are fluid dependent on circumstances, and the ancient world provided challenges we can only dream of today.

Tags
cooperationcultureenvironmentgendersocietywomen
In this article
cooperationcultureenvironmentgendersocietywomen
Related
Life
Strange life forms create an “alien” ecosystem in an abandoned uranium mine
Slimy biofilms made up of bacterial and eukaryotic life forms have taken over an abandoned, flooded uranium mine in Germany.
High Culture
Why are flood myths so common in stories from ancient cultures around the world?
Could the prevalence of flood myths around the world tell us something about early human migration or even the way our brains work?
The Present
Climate change is altering the chemistry of wine
Smoke taint from wildfires is gross, even to wine amateurs.
Life
Our antidepressant drugs are affecting animals and ecosystems
A toxicologist explains the impacts of antidepressants on fish — and no, they’re not getting any happier.
Thinking
Creative wisdom from Rick Rubin: embrace your inner gatekeeper
Unlock the full potential of your creativity with holistic detachment. This is the way of the editor.
Up Next
Starts With A Bang
First ‘Earth Without A Sun’ Discovered: Thousands More To Be Revealed Soon
The first Earth-sized planet without a parent star has just been discovered.For countless millennia, planets beyond our Solar System were mere speculation.Today, we know of over 4,000 confirmed exoplanets, with […]