Could online communities also transform behavior in the financial world?

That’s one of the key questions explored in a new study published on the preprint server arXiv. Titled “Reddit’s self-organised bull runs: Social contagion and asset prices,” the study used discussion data from the subreddit WallStreetBets to analyze relationships between the price of stocks and “hype” among online retail investors.

Hype is nothing new in the investing world. But the researchers noted that there seems to be something novel about the short squeeze of GameStop’s stock in January, when the price of the stock rose tenfold, thanks largely to self-organized retail investors from WallStreetBets.

“As academics and regulators alike grapple with the implications, many wonder whether large-scale coordination among retail investors is the new ‘modus operandi,’ or a one-off fluke,” the researchers wrote. “We argue that this is a new manifestation of a well-established global phenomenon.”

To better understand how online hype is associated with stock prices, the researchers focused on two social components of hype: contagion and consensus. Contagion refers to investors spreading interest in an asset among each other, while consensus refers to their ability to agree on whether to buy or sell an asset.

The analysis found empirical evidence that both contagion and consensus emerge in online communities like WallStreetBets. In other words, investors spread sentiments about future stock performance to other investors, and then they cohere around investment strategies.

The findings suggest that an asset’s popularity, not its fundamentals, is paramount to many investors.

“Our results consistently show that investors become interested in discussing an asset, not because of fundamentals, but because other users discuss it,” the researchers wrote. “Subsequently, this paper tests whether an individual’s sentiment about future asset performance [is] affected by those of others. We find that this is the case: people look to their peers to form an opinion about an asset’s potential.”

To find evidence for social contagion among online investors, the researchers compiled a large dataset of posts and comments submitted to WallStreetBets. The goal was to analyze whether investors’ past comments or posts about a given stock, such as Tesla, had a predictable effect on future discussions of that asset within WallStreetBets.

After conducting a regression analysis, the results suggest that hype is socially contagious and cyclical. The cycle usually plays out like this: A small group of investors hypes an asset. This attracts a larger group of investors who join the discussions. 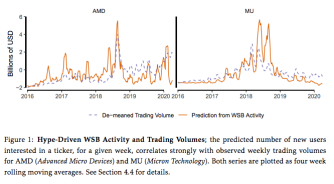 But eventually, too many investors have joined the discussion, and fewer new investors are buying into the hype. As investors lose interest, they spend less time discussing (or “spreading”) the asset on the forum, and they turn to new opportunities. The process is similar to a virus: As enough people become infected, they reach herd immunity, and the virus (hype) dies out.

So, does this process affect the stock price, and if so, how? The researchers said it was difficult to establish causality between hype and actual market activity. After all, they didn’t have access to the trading records of subscribers to WallStreetBets.

But their model did show that activity on WallStreetBets was able to explain “significant variance” in trading volumes for the most-discussed assets on the forum. This suggests that when social contagion is strong for a given asset, consensus is strong too.

On the stock chart, consensus may start off bullish (or positively): As hype spreads, there’s a slow, steady run-up in price. But the growth eventually becomes unstable and is followed by a crash and a period of volatility.

“The price crash stems from panic selling, as investors turn nervous in the face of volatility,” the researchers wrote.

Interestingly, the analysis found that bearish (or negative) sentiments were significantly more contagious on WallStreetBets.

“As social media galvanizes a larger pool of retail investors with the potential for exciting stock market gambles, it is crucial to understand how social dynamics can impact asset prices,” the researchers wrote. “With the first publicly acclaimed victory of Main Street over Wall Street, in the form of the GameStop short squeeze, it is unlikely that socially-driven asset volatility will simply disappear.”

The insanity of the academic job market laid out in numbers.
Hard Science

Guess which country has 269% inflation.
Sponsored

For decades, cinemas have earned more from concessions than ticket sales. But can their current business model survive in the streaming age?
Up Next
Digital Fluency

Why the future of technology will surprise you

Predicting how emerging technologies will impact industry is more difficult than it seems—and it seems plenty difficult.  The reason is that we envision the future based on the present. We […]