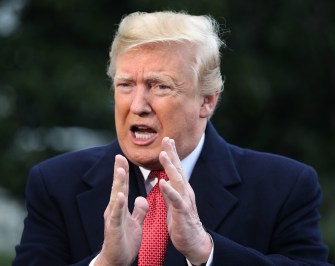 NOVEMBER 09: U.S. President Donald Trump signs order to limit asylum seeker claims. Here, he speaks to the media before departing for Paris, France, on Marine One on the South Lawn of the White House.

President Donald Trump signed a presidential proclamation Friday that will deny asylum to migrants who cross the U.S.-Mexico border illegally, a move intended to funnel incoming migrants to legal ports of entry.

“I just signed the proclamation on asylum—very important,” Trump told reporters on Friday before leaving for Paris. “People can come in but they have to come in through the points of entry.”

The proclamation, along with regulations adopted Thursday, oversteps current federal laws that allow all migrants who cross the border—legally or illegally—to seek asylum in the U.S.

Migrants who are denied asylum may still be eligible for other forms of protection, including “withholding of removal,” in which migrants aren’t deported to their home countries but have no pathway to obtaining a green card or citizenship.

The measures, which go into effect on Saturday and will last at least 90 days, are likely to face legal challenges.

“The law is clear: People can apply for asylum whether or not they’re at a port of entry, and regardless of their immigration status,” Omar Jadwat, the director of the American Civil Liberties Union’s Immigrants’ Rights Project, told The New York Times. “The president doesn’t get to ignore that law, even if he dislikes it.”

The United Nations refugee agency UNHCR said on Friday its legal experts were reviewing the proclamation.

Trump’s extraordinary use of presidential power comes as a widely covered caravan of migrants is traveling through Mexico toward the U.S. border. Currently, the caravan is estimated to include 4,000 to 5,000 migrants who left Mexico City early Friday morning to head north to the city of Querétaro.

In the weeks before the midterms, Trump made the caravan a central issue, deploying some 5,000 troops to the U.S.-Mexico border to support officials already stationed there.

A caravan of migrants last arrived at the U.S.-Mexico border in April. The ports of entry became overwhelmed, and some of the migrants chose to cross the border illegally and, if caught, apply for asylum. Some migrants currently heading to the border are considering doing the same.

“I don’t care what Donald Trump says,” Honduran migrant Jorge López, 18, who plans to apply for asylum, told USA Today. “I’ll go through the front door, but if they don’t allow it, I’ll enter whatever way I can.”

How immigrants and their children affect the US economy

How immigrants affect the U.S. economy