When it comes to weird behavior, there’s nothing quite like the quantum world. On top of that world-class head scratcher entanglement, there’s also quantum tunneling — the mysterious process in which particles somehow find their way through what should be impenetrable barriers.

That quantum tunneling occurs has not been a matter of debate since it was discovered in the 1920s. When IBM famously wrote their name on a nickel substrate using 35 xenon atoms, they used a scanning probe microscopes to see what they were doing. And tunnel diodes are fast-switching semiconductors that derive their negative resistance from quantum tunneling.

“Quantum tunneling is one of the most puzzling of quantum phenomena,” says Aephraim Steinberg of the Quantum Information Science Program at Canadian Institute for Advanced Research in Toronto to Live Science. Speaking with Scientific American he explains, “It’s as though the particle dug a tunnel under the hill and appeared on the other.”

Steinberg is a co-author of a study just published in the journal Nature that presents a series of clever experiments that allowed researchers to measure the amount of time it takes tunneling particles to find their way through a barrier. “And it is fantastic that we’re now able to actually study it in this way.” 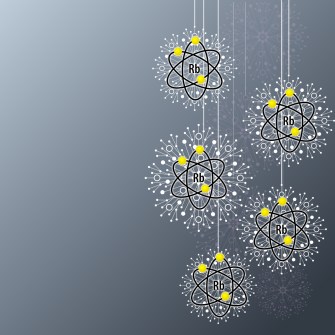 One of the difficulties in ascertaining the time it takes for tunneling to occur is knowing precisely when it’s begun and when it’s finished. The authors of the new study solved this by devising a system based on particles’ precession.

Subatomic particles all have magnetic qualities and they spin, or “precess,” like a top when they encounter an external magnetic field. With this in mind, the authors of the study decided to construct a barrier with a magnetic field, causing any particles passing through it to precess as they did so. They wouldn’t precess before entering the field or after, so by observing and timing the duration of the particles’ precession, the researchers could definitively identify the length of time it took them to tunnel through the barrier.

To construct their barrier, the scientists cooled about 8,000 rubidium atoms to a billionth of a degree above absolute zero. In this state, they form a Bose-Einstein condensate, AKA the fifth-known form of matter. When in this state, atoms slow down and can be clumped together rather than flying around independently at high speeds. (We’ve written before about a Bose-Einstein experiment in space.)

Using a laser, the researchers pushed about 2,000 rubidium atoms together in a barrier about 1.3 micrometers thick, endowing it with a pseudo-magnetic field. Compared to a single rubidium atom, this is a very thick wall, comparable to a half a mile deep if you yourself were a foot thick.

With the wall prepared, a second laser nudged individual rubidium atoms toward it. Most of the atoms simply bounced off the barrier, but about 3 percent of them went right through as hoped. Precise measurement of their precession produced the result: It took them 0.61 milliseconds to get through.

“This is a beautiful experiment,” remarked Igor Litvinyuk of Griffith University in Australia. “Just to do it is a heroic effort.” Drew Alton of Augustana University in South Dakota tells Live Science, “The experiment is a breathtaking technical achievement.”

What makes the researchers’ results so exceptional is their unambiguity. Says Chad Orzel at Union College in New York, “Their experiment is ingeniously constructed to make it difficult to interpret as anything other than what they say.” He calls the research, “one of the best examples you’ll see of a thought experiment made real.” Litvinyuk agrees: “I see no holes in this.”

As for the researchers themselves, enhancements to their experimental apparatus are underway to help them learn more. “We’re working on a new measurement where we make the barrier thicker,” Steinberg said. In addition, there’s also the interesting question of whether or not that 0.61-millisecond trip occurs at a steady rate: “It will be very interesting to see if the atoms’ speed is constant or not.”

Scientists turn to nature to improve a ubiquitous building material.
The Future

A two-dimensional material made entirely of carbon called graphene won the Nobel Prize in 2010. Graphyne might be even better.
Videos

The first human that isn’t an Earthling could be in our lifetime.
▸
5 min
—
with
Robert Curbeam
The Future

In paint form, the world’s “whitest white” reflects so much light that surfaces become cooler than the surrounding air.
The Present

Cement production currently accounts for 8% of global carbon emissions.
Up Next
Starts With A Bang

The 5 Possibilities For Life On Mars

While Mars is known as a frozen, red planet today, it has all the evidence we could ask for of a watery past, lasting for approximately the first 1.5 billion […]