The first week of Trump’s Presidency was marked by an abundance of warnings amidst a flurry of executive orders that seemed designed to deliver on Trump’s campaign promises. The executive orders were often short on specifics and time will tell how many of the proposed policies are going to stick, but as has been the case so far – those hoping that somehow Trump will be tamed by the awesome power and responsibility of the office he now holds, are likely to be disappointed. In fact, the exact opposite is proving true – Trump is doubling down on even his most controversial policies. The wall is getting built, Muslims are getting banned, scientists are gagged.

While this may be pleasing to the most ardent of his supporters, the mood of the rest of the country swings between less optimistic caution and sheer abject depression. More than 3 million marchers filled American streets, the dystopian novel “1984” (written in 1949) becomes a best-selling book, and Nazi supporters are suddenly both more visible and getting punched in the face.

But no one has encapsulated the emotions of these early Trump days more dramatically than a group of scientists, who every year since 1947 determine whether to move the hands of the Doomsday Clock. This is a symbolic clock that is meant to indicate how close we are to nuclear war and global annihilation.

The scientists announced that the Doomsday clock has been moved 30 seconds closer to midnight specifically because of Trump’s election, going from 3 minutes away to 2.5. That’s the nearest the clock has been to midnight in 50+ years. We are talking the peak of the Cold War close.

Why did the scientists, who include 15 Nobel laureates, move the clock’s hands? Short answer – Donald Trump.

“Never before has the Bulletin decided to advance the clock largely because of the statements of a single person. But when that person is the new president of the United States, his words matter,” wrote two members of the clock’s committee – retired U.S. Rear Admiral (and Professor) David Titley and theoretical physicist Lawrence M. Krauss in an op-ed in New York Times. 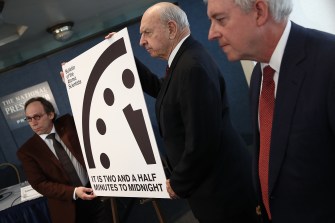 The clock was initially created by the editors of the Bulletin of Atomic Scientists, founded by many Manhattan Project scientists. They described the clock as representing “the urgency of the nuclear dangers”. The clock was initially set at 7 minutes to midnight and while its hands have been moved 22 times, its closest time to midnight so far was set in 1953, when U.S. and USSR tested hydrogen bombs. It was moved to 2 minutes to midnight. By comparison, in 1991, the hands were set to 17 minutes away, reflecting the perceived end of the Cold War in the dissolution of the Soviet Union.

In their explanation for moving the clock hands now, the scientists laid out the general instability in the world (only to be made worse by climate-change-denying politicians), continual testing by North Korea, and even the spread of fake news that can start arguments, like nuclear Pakistan’s defense minister saber-rattling to Israel over a fake story via Twitter. Other reasons include the volatile relationship between the U.S. and Russia and the “wavering public confidence in the democratic institutions required to deal with major world threats”. The reason climate change is given prominence in the group’s platform is because they consider it as a vital and growing threat that can also bring on the apocalypse.

As far as Trump specifically, this is what the Board of the Bulletin of the Atomic Scientists said in a statement:

“This already-threatening world situation was the backdrop for a rise in strident nationalism worldwide in 2016, including in a US presidential campaign during which the eventual victor, Donald Trump, made disturbing comments about the use and proliferation of nuclear weapons ‘and expressed disbelief in the overwhelming scientific consensus on climate change.”

The group does offer a hopeful note that since Trump has been President only a few days, without his Cabinet confirmed (which the group finds full of “questionable” nominations), they did only move the clock by less than a full minute, an unusual practice for them.

The scientists made calls on the public to exert pressure on its leaders to pull back on the dangerous rhetoric and address the real issues in the world, stating that: “In 2017, we find the danger to be even greater, the need for action more urgent. “

Scientology, QAnon, and Heaven’s Gate: why do we seek healing from cults?
▸
with
Jamie Wheal
Politics & Current Affairs

From corrupt czars to bloodthirsty Bolsheviks, Russia has had no shortage of bad leaders. But just how evil were they really?
Up Next
Starts With A Bang

NASA’s Weightless Wonder, more commonly known as the Vomit Comet. This is a modified Douglas DC-9 airliner. Image credit: NASA.Why weightlessness is possible, even if there’s no place you can hide […]