About 251,000 people around the world died from gun violence in 2016, according one study. One-third of that number — more than 80,000 — came from the two countries with the most gun-related deaths: Brazil, in 1st place, and the United States, in 2nd place.

It’s clear there’s an issue here, in the Americas, but gun rights are a contentious topic in the United States. Pro-gun proponents argue that gun ownership is a necessary prerequisite to prevent tyranny, while anti-gun proponents argue that the cost of widespread gun ownership is too high a cost, in terms of potential violence, to pay for defending against a hypothetical threat. They point to European countries where the rate of gun ownership is significantly lower and, commensurately, the rate of gun deaths is significantly lower.

However, Switzerland appears to be an exception. The country’s gun ownership rate is high. Although its rate of deaths from gun violence is still high for Europe, compared to the United States, Switzerland seems to have a much more effective practices when it comes to mass shooting, which last occurred in the land-locked nation in 2001. 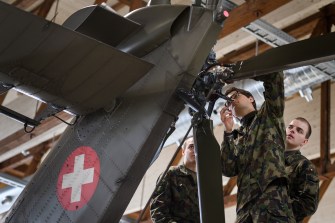 Though Swiss gun ownership remains fairly high for Europe — there are about 27.5 guns for every 100 people in Switzerland — compared to the United States, it’s relatively low — for every 100 Americans, there are about 120.5 guns. Whereas the U.S. has nearly 12 deaths per 100,000, Switzerland has around 7. Considering the discrepancy between U.S. and Swiss gun ownership, that lesser number may be directly attributable to the number of guns in circulation.

Where Switzerland does shine, however, is in its low number of mass shootings. It hasn’t had one since 2001, when a man raided the local government body in Zug, killing 14 people before himself. This said, there are a few factors that may play into their lower rates of mass shootings.

First, Switzerland has mandatory military service for able-bodied adult men, and women may volunteer for military service as well. Mandatory conscription is actually extremely popular in Switzerland, with 73 percent of Swiss citizens voting against a referendum to abolish the practice. After their military service, the Swiss are kept in reserve until age 30–34, if they were an officer — during which time they must keep their service weapon. As a result, many Swiss people own firearms and are highly trained in their use by default. In contrast, if a U.S. citizen lives in a particularly permissive state, they can buy a gun without any kind of training whatsoever.

Furthermore, Swiss civilians must demonstrate that they are physically, intellectually, and mentally capable prior to conscription in the army (source in French). While this is a requirement for service in the U.S. military, it is not required for gun ownership in many states in America. Since many Swiss citizens obtain their weapons through the military, this acts as a major avenue by which gun owners’ capability can be verified.

Technically, American federal law does prohibit the severely mentally ill from purchasing firearms, but the implementation of this ban is poor. The federal background check system is severely understaffed and underfunded, and records on prospective gun buyers’ mental conditions are typically incomplete or absent even if a court had previously found them to be unwell. Dylann Roof, who fired upon a church in Charleston, South Carolina, should have failed his background check, but was able to buy his .45 caliber Glock anyways. In contrast, some Swiss police may ask for a certificate from a psychiatrist prior to approving a gun license, which is required before buying most kinds of guns in Switzerland.

Pro-gun advocates in the U.S. often point to Switzerland to prove that high gun ownership doesn’t necessarily mean high gun deaths. However, Switzerland has a wildly different regulatory environment and — perhaps most importantly — culture than the US. Mandatory military service would be unlikely to be popular in the U.S., not least because where Switzerland has been historically neutral, the U.S. has historically been involved in a number of wars in recent history. But there might be something to be said about changing our attitudes toward guns, at the very least so that there can be productive discussions on what gun policy should be.

Tags
Europegunslawmilitary
In this article
Europegunslawmilitary
Related
The Present
Could we replace lawyers with robots? In some cases, yes
You don’t need to completely automate a job to fundamentally change it.
Neuropsych
Science in the court: how neuroimaging can improve the “reasonable person” standard
For nearly two centuries, courts have relied on the subjective “reasonable person standard” to solve legal disputes. Now, science can help.
The Present
How to reduce gun violence without taking people’s guns
Hospitals often deal with the aftermath of gun violence, but they can play a key role in preventing it.
▸
5 min
—
with
Michael Dowling
The Present
Thanks to Iceland, the four-day workweek is coming
A new study from Iceland confirms that a shorter workweek improves productivity.
Strange Maps
Free speech? Not everybody loves it, this map shows
In some countries, people want more freedom of speech. In others, they feel that there is too much.
Up Next
High Culture
He had countless hit records. You never heard of him.
Many of the world’s favorite records weren’t really recorded by the artist on the label.