Drummer Hal Blaine died on March 11 at 90 years young. Though you may not know his name, he was arguably the most important drummer in the history of recorded music. And the fact that so few were aware of his existence is no accident. If you’re a fan of popular music of the 1960s and 1970s — or if you’re simply a person who feels that the history of 20th century music is as worthy of study as, say, 18th century music — then you know his work.

Blaine was one of a handful of behind-the-scenes musicians and singers responsible for much of that era’s most popular music. His was the anonymous beat driving a dazzling number of hit records.

Technology and the secret stars

Until Les Paul’s introduction of overdubbing in 1948, recording was a pretty straight-ahead process: Talented musicians and vocalists were captured performing live by a handful of mics in a great-sounding studio room, and a lot of magic was captured. Warts and all. (Singer Joan Baez once described the period as a time when the final performance, or “take,” was simply the one where no dog ran through the room barking.)

Les Paul changed all that. With overdubbing, a recording was made on one machine, and that recording was copied to a second machine while someone played or sang along. The resulting sound was the first performance with the second layered on top, both sounding as if they occurred at the same time. This process could be repeated lots of times, as in the hit recording made by Paul and his wife, “How High the Moon.” With each successive overdub, though, each copy of a copy of a copy would degrade in clarity way down there at the bottom of the stack of performances. 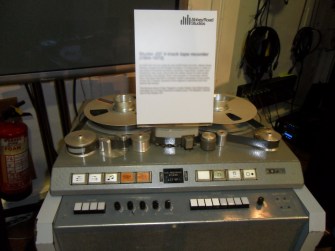 One of the 4-track recorders on which The Beatles’ *Sgt. Pepper* was recorded. Image source Josephinus P. Riley

By the early 1960s, most professional recording was done on “multi-track” recorders. These machines allowed you to pile up performances as overdubbing did, though each performance was actually captured on its own separate “track,” a strip that ran the length of the recording tape alongside other tracks, much like a lane on a multi-lane highway. During playback, as with overdubbing, everything sounded as if it had been performed at the same time, but since each performance didn’t have to be copied, its original audio quality was preserved. Also, recording engineers could “mix” the tracks later on to achieve the desired volume balance between them, and also gained the ability to add different sonic treatments to each track’s performance.

This new technology provided a solution to a longstanding entertainment industry paradox: We like our stars attractive and talented, something that happens only rarely. There was another problem, too. Groups of musicians and singers who wrote their own material, such as the Beatles, became popular, an even rarer commodity: Multiple attractive people who are also talented and worked together. Oh, and wrote their own songs.

With buyers clamoring for new music, record companies didn’t want to wait around for such acts to fall from the sky, so — using multi-track technology — a new business model emerged: Incredibly talented players, singers, and songwriters secretly churned out hit after hit for “stars” the public fell in love with. Sometimes the performers sang on their records, sometimes they didn’t. But a surprising number of popular “bands” never actually played a note on their biggest hits. When it came time to go out and perform, there was often a mad scramble for them to learn to play, and what audiences heard on stage was rarely as good as what they heard on records.

Blaine played with a group of Los Angeles studio musicians known later on as the “Wrecking Crew.” They weren’t a band, per se, but rather just a collection very talented players who were often booked to play on the same sessions. The number of records they played on is staggering. Some of them later became stars in their own right, among them Glen Campbell and Leon Russell. Fans had little idea that hits by The Beach Boys, The Byrds, The Monkees and many, many others were in fact the music of the Wrecking Crew. Blaine also went on the road and recorded with artists as diverse as Frank Sinatra and John Denver. The son of guitarist Tommy Tedesco put together a loving film history of the Wrecking Crew.

The Wrecking Crew was hardly the only such collection of unknown side-men and -women. Fortunately, the stories of these unsung heroes have been finally emerging through a series of fascinating documentaries. 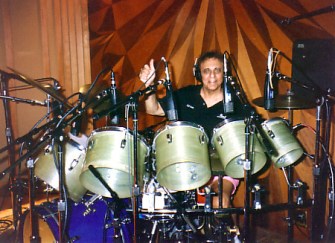 Blaine — born Harold Belsky — is said to have played on 40 #1 hits, enough for his own personal Top 40, though the list typically presented is actually missing some big songs, so it’s really more than that. Spotify recently put together a Blaine playlist to mark his passing. The drummer’s autobiography is Hal Blaine and the Wrecking Crew.

Part of what made Blaine so exceptional are the many standout drum licks he came up with, among them the “boom-buh-boom, CRACK, boom-buh-boom, CRACK,” intro for the Ronettes “Be My Baby,” the drum hook of Tijuana Brass’ “Taste of Honey,” and many more.

He’s also responsible for the absolutely thunderous drum wallops in the choruses of Simon and Garfunkels’ “The Boxer.” In The Big Beat, a now-out-of-print book of interviews conducted by Bruce Springsteen’s drummer Max Weinberg, Blaine recalled recording them in front of an open elevator shaft to get that sound:

“I set up two huge tom-toms and put on a headset so I could hear when the music got to the ‘lie-la-lie’ part, where I hit the drums as hard as I could. There was this massive explosion in the room, which is what you hear on the record. It was amazing, but the thing I remember most about the session is when the elevator door opened just as I came down on the drums, and this elderly security guard looks out and he hears this pow! It nearly scared him to death. He jumped back into the elevator, closed the door, and took off. We never saw him again and I think about his face every time I hear ‘The Boxer.'”

The story of Darlene Love is the centerpiece of 20 Feet from Stardom, a look into some of music’s greatest unheralded singers who are on many of the world’s classic records — they also sing on commercials. Love was the uncredited primary vocalist for The Crystals and other Phil Spector acts, and one of many outstanding singers who quietly supplied harmonies for countless hits. In the studio, these technically expert vocalists are blindingly adept: A little sheet music and a few verbal instructions is all it takes for instant harmonies and riffs. A number of star vocalists got their start as backup singers, among them Katy Perry (then Katy Hudson), Pink, John Legend, Whitney Houston, Maria Carey, Sheryl Crow, Gwen Stefani, Mary J. Blige, and Luther Vandross.

Today’s top records rely to an even greater degree on multitrack recording — often with hundreds of tracks in a song, as opposed to the 1960s’ 3-, 4-, 8-, and 16-track limitations — but there’s now much less secrecy about who’s playing what, and it’s often just a record’s hyper-talented producer.

Music is still a business, but we’ve come a long way from the days when supporting musicians, singers, and recording engineers were deliberately hidden from view. Now, though, in the post-CD era, there’s a new problem: Streaming services don’t — as of this writing — include credits. To find out who played or sang what, it’s off to Wikipedia, or to artists’ websites.

Maybe we just need to make sure those artists — and their teams — get the message that at least some of us want all the info they can provide on how those amazing sounds get made.

With a new telescope on the horizon, we reflect on the best pictures of space that came before.
High Culture

Undiagnosed brain disease or divine inspiration? The origins of the French composer’s most provocative composition remain up for debate.
High Culture

Just as storylines make sense only when you have the context of the beginning and the end, listeners need to understand the impetus for why the album was even made.
Up Next
Neuropsych

Your romantic partner is probably less intelligent than you think, suggests new study

Our egotism and self-confidence can sometimes spill-over to our loved ones.