When the Dixie Chicks criticized the Bush administration for planning to launch a war in Iraq nine days before the president did so in 2003, the Dallas-based band was ostracized, forced to play for smaller audiences for years afterward. Of course, today those that voted for the war are roundly criticized—the Iraq War vote remains one of the most contentious talking points in our politics. At the time, however, Team America attacked any naysayer.

While it’s hard to tell where Kanye West’s head is at on any given day, he has expressed support for Trump in what has become one of the modern era’s strangest mixtures of politics and music. West’s support for the president was met with admonishment from the Left and a sudden embrace from (some of) the Right, especially with his recent embracing of Christianity. (He’s long been religious, but there has been a serious uptick.)

Taylor Swift recently criticized her home state senator while apologizing for not speaking out against Trump in 2016. While Trump was stumping for Florida governor Rick Scott, Jimmy Buffet performed at a free concert in support of Democratic nominees Andrew Gillum and Bill Nelson. Trump has the support of Gene Simmons and Kid Rock; Killer Mike feels the Bern.

A common refrain from disgruntled fans is that musicians should “Shut up and sing!” In the current age, simply expressing support for this or that candidate has its own currency—and criticism. Yet musicians are citizens too. If a guy with an internet connection and a grudge to bear can amass millions of followers for nothing more than ranting, we’d do well to listen to those that have a track record of contributing positively to our culture.

Music is not just entertainment, nor are artists hired hands playing at the royal court. Discomfort is part of the appeal. Massive Attack recently played a video of Trump and Putin merging into one figure while performing Pete Seeger’s “Where Have All the Flowers Gone?” at the Palladium. There was nothing comforting about this combination of imagery and sound. Four months later it remains the most powerful moment imprinted in my mind from that evening.

I first interviewed Azam Ali in July, 2005, shortly after Niyaz released their debut album. Along with her husband and musical partner, Loga Ramin Tarkien, and producer Carmen Rizzo, the Iranian-born singer was reinventing sacred Middle Eastern and Indian music—though reared in Tehran, Ali was mostly raised in Panchgani in the Indian state of Maharashtra—in an electronic context. They remain one of my favorite global music projects.

Being connected with Ali on social media ever since, I’ve noticed her fearlessness in expressing political views. Last week we met up in her Los Angeles studio (the full interview is here) to discuss music, politics, and life. I first asked about her unwillingness to, as she told me a number of fans have expressed, “shut up and sing.”

“So much of it is a personal journey when you’re an artist, whatever your medium is. When you’re doing it right, you should always be challenging yourself and be digging deeper and deeper. A lot of art is political.”

It reminded me of chatting with Duke Amayo, the lead singer of Afrobeat ensemble Antibalas, many years ago. The Nigerian musical style is rooted in Fela Kuti’s politics, yet some members of Antibalas preferred to eschew the social messaging and simply be a “party band.” When discussing Amayo’s political lyrics one day, he told the band, “Politics have parties, don’t they?” They’ve always been a party band—one that is and remains deeply political. In a separate interview, former drummer Phil Ballman told me that 16 guys on stage representing various ethnicities and belief systems is a political statement in itself.

Ali was born into a Muslim and Baháʼí family, the latter being an oppressed sect in its Iranian homeland. She went to boarding school in India to escape oppression; her mother was unable to leave for seven years due to her faith. Eventually, they ended up in Los Angeles in 1985 as part of a program that relocated Baháʼí members across the planet. 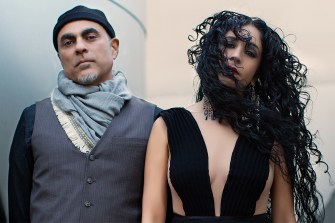 Having studied Indian classical dance throughout her youth, Ali took up santur upon landing in America. The Persian hammered dulcimer spiritually and sonically connected her with her homeland. Due to the firm request of her teacher she reluctancy (and thankfully) ended up a vocalist. During that transition it was natural that her lyrics were pulled from the three cultures she had lived in.

“I only have opinions on subjects that are part of my lived experience. My music would not be what it is if I did not have certain social and political experiences. How could that not be part of my work?”

Those experiences are impossible to turn away from: the Revolution of 1979 in Iran, which the scholar James Buchan describes, “It was as if Mohammed Reza’s haste to force modernity on Iran was matched by a haste to demolish it, and the conflicts of centuries were being squeezed into half a dozen years”; nationalism and xenophobia exploding across India, which Ali describes as the “rise of really volatile ideas coming together”; and, of course, the current state of partisanship in America. Ali continues,

“The biggest threat we’re facing right now is the loss of secularism. Iran is a perfect example of what happens when you allow religion into government. The mullahs in Iran and the current administration in America have a lot more in common than we’re even willing to talk about.”

This matters. When a president expresses (at least) 31 dubious claims during the State of the Union, a number focused on minority communities, we need to hear from the people who have lived through the consequences of such turbulence before. The Arts cannot only comfort; they must challenge us to be better, to develop more thoughtful and compassionate mindsets. This demands a willingness to peel back the illusions presented to the camera to expose the hideous truths beneath.

From African griots to Mexican corrido singers, musicians have long served, as musical historian Elijah Wald phrased it, as “living newspapers.” The transition from stage to print to digital has only expanded their reach. Music has always been a political force. Whether you agree with their politics or not, the artists that move us deserve to be heard.

Tags
activismdemocracymusicpolitical endorsementspoliticsprotests
In this article
activismdemocracymusicpolitical endorsementspoliticsprotests
Related
High Culture
5 great (and underrated) songs about cities
Most popular songs are about love and heartache. But some great songs — albeit underrated and perhaps a bit weird — are about the cities we love.
High Culture
“Global Jukebox” database uncovers secrets from the history of music
We don’t know when or how music was originally invented, but we can now track its evolution across space and time thanks to the Global Jukebox.
The Past
The hobbies of 5 great geniuses
Albert Einstein played a mean violin.
Neuropsych
Here’s why you should put your “calling” on hold to pursue a more “sensible” career
When your passion becomes your day job, sometimes the day job becomes a chore.
High Culture
How Bob Dylan used the ancient practice of “imitatio” to write songs
Because Dylan “samples and digests” songs from the past, he has been accused of plagiarism. But imitatio isn’t the same.
Up Next
Strange Maps
The shocking, forgotten history of cretinism
Now an insult, ‘cretin’ was the medical term for a debilitating disease endemic in the Alps until the early 20th century.